Wynne is newly married, and has moved to Woolwich, in London where her army husband now works. She has been lazy about the diary, and resolves to start it properly again…this volume is now the fourth on her shelves.

The parade ground at Woolwich. 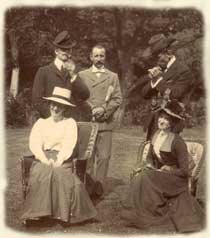 It is with the best intentions that I open this Diary once more and endeavour to pick up the lost thread, I don’t know how it is but at one time I could write so easily and such plenty of nonsense but this great art has departed from me! However here we are settled for the present at Woolwich where we came about three months ago. We have been in these quarters just over a month, No 53 the Common. They are small but very comfy, and consist of a nice hall, dining room and servants bedroom on the ground floor, drawing room, smoking room and spare room 1st floor, and our bedroom and dressing room above…it is a great regret to me that we have no garden, if we are still here in summer it will be a terrible deprivation but I almost think that we shall be moved to Christchurch before then. Strange as it may seem we both like this much abused dog hole, partly owing to the fact that there are so many nice people here and we nearly all live so close to each other. Visitors come showering in every day and I do nothing but try and get on the right side of any call, it is hopeless…

January 24th
Went calling this afternoon, I never saw such a place as this is for calls, there are hundreds to do and I never seem to get even with them. I heard to my horror today that I am to buy all the presents for the Xmas tree (for the army children) which is being given next Saturday, there are 125 children to provide for and my flesh creeps lest I should make a mess of it all.

(It was the custom then to leave your card at every suitable house, and then to follow it with a call. This proved a very arduous process, and the trick was to call when folk were not in, so that you would not get caught, but could simply leave a card and escape!).

January 25th
I have been in bed all day with a chill. On going to bed last night I felt decayed and still more so this morning so I stayed there and spent a lovely day.

January 26th
Got up after breakfast resurgam joy! I didn’t go out of course and was not sorry to stay in as it looked so bitterly cold from my window and half a hurricane blowing. This afternoon to my great joy Uncle Arthur came in having walked over. I was so glad to see him, the more so as we had been prevented from going over there to spend this weekend with them on account of my seediness and also because H had suddenly been put on duty for this week but we hope to manage it another week end. I had a long cheery letter from Eve (sister) last also from CG at which I was extremely surprised, it is the first he has ever written me in his life! and was to thank for a pipe I sent him.

(Arthur Butler lived six miles away – a short walk for a person in those days. He was the father of Yso, who features in the very first diary entry. Yso and Brenda, his two daughters, were about the same age as Wynne, and had grown up with her. Yso was to end her life during a journey…) 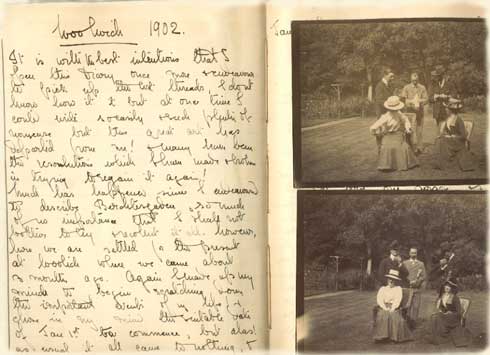 Wynne and Herbert are on the right of both photographs – they were obviously fooling around, probably in a neighbour’s garden in Woolwich.