April 20th, Tuesday
We returned home with much sorrow. I found dear Gran wonderfully well. Last night we had a long talk about old times and I made her tell me of her girlhood and early life, how at her wedding some 70 years ago she wore a white net dress over white silk and a white bonnet! Her going away gown was mouse brown glacé and she also had in her trousseau a black velvet which cost 20 guineas! Her own family consisted of 15, her father married twice and had 13 children by his first wife and 2 by the second. The latter, Caroline and Isabella, died young.

April 21st
This day 10 years ago I was sitting in the Watson’s Annexe Hotel in Bombay and my dear poushkin did me the honour. How time flies! What joy these years have brought and I love him if possible more than ever.

April 22nd, Thursday
I have been reading many articles in the XIX Century of late, each one you pick up is full of wars and rumours of wars. The air is filled with agitators and their wise but fruitless exertions to rouse the nation into an appreciation of its situation. Trouble is on every side, our navy soon will not be sufficient for defence against Germany whilst our Army is looked upon as a sort of toy by that nation. German invasion is on everyone’s lips and indeed it seems more than mere froth. India is in a terrible state of sedition, and Ireland ditto, Servia and Austria have just escaped war whilst Turkey with its Young Turks and its weak and driven Sultan is in a state of upheaval so that times are bad and relations strained in a good many directions. The papers are full of it all and I enclose an article from the XIX by Cox about India giving a dreadful account of it all (previous panel), also cutting from the Graphic about the Navy Censure, the small one on the German menace is only hysterical but its extravagance amused me (next panel). Of course there will always be people who write like this provoking laughter and so failing to achieve their object. (In a pencilled addition written in 1916, Wynne has added in the margin “Oh! oh!! if one could have known the future”).
This day we were to have had a pike hunt but it pelted so we could do nothing but sit indoors and gnaw our nails with vexation.

April 23rd, Friday
Miss Barclay came in to lunch. This evening her dance came off but at 10 very little seemed done but she was as calm as you please. It was great fun as any dance always is and I don’t think I struck any man who danced divinely! but they were all very jolly. We got home at 3.15 and soon after I got into bed my right foot began to ache. I stood if for an hour and then had to call Poggy who rubbed it with opium and gave me (? illegible) which had the desired effect.

April 25th, Sunday
A huge Parade and hardly a seat to sit on, many rifles and terrier officers being present. Being St Marks day we had the collect for “strange doctrines” which seemed quite appropriate.

April 26th
I went for a joyous ride this morning, windy but very lovely. On the way I fell in with the Sergt. Major who came with me and we galloped away out beyond Silk Hill.

April 28th, Wed
Mothers Meeting day. 18 women and 9 babies. Pandemonium. Much chatteration and a great many garments made and much business done.

April 30th
I have had an invitation from Major White T to the Woolwich Ball on the 4th and I do believe there is a chance of going. I long to see the dear old place again and to hear that divine band.
At last the Netherlanders are satisfied. Princess Juliana was born this day and the Queen may now rest on her laurels. 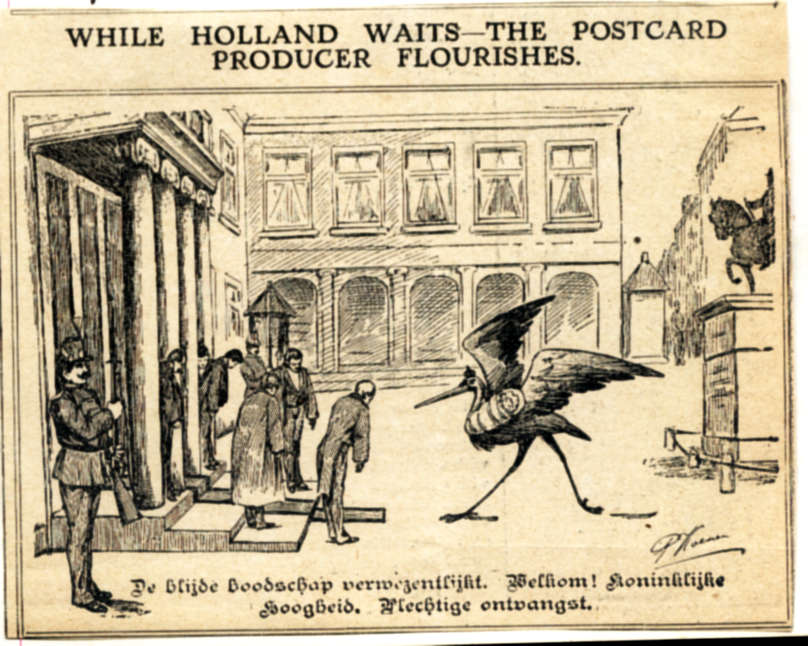