August 23rd, Monday
More rain and only a fitful gleam of sun. Bathed after lunch and had tea on Bath beach but it rained nearly all the time and was really rather a damp amusement.

Aug 24th
It has hardly ceased to pour the whole day. Last night we decided to have another try for Rockham Bay and so off we started. Rain descended in torrents but we were all suitably dressed and the children in mackintoshes but it was so utterly persistent that on sight of Damage Farm we gave in and went there to crave shelter and eat our sandwiches. We obtained there bread, milk, jam and cream, played up Jenkins, and trudged home again to tea. A miserable day.

Aug 25th
We spent an idle morning on the beach and after lunch the children went off to Bath Beach where they played about whilst Arthur, Mabel, H and I went to the left where we tea’d.

Aug 26th
We all went over to Rockham today and succeeded at last. We picked up cowrie shells and came back by Damage Farm where we had an enormous tea. A jolly day.

Aug 27th, Friday
A day of idleness, the usual bathing in the morning and then as soon as the tide allowed us tea on to the further cove to the right. The Wilkins joined us and we were a party of about 20, nearly all children, and it was great fun.

Aug 28th
The weather is still holding up. It has been a glorious day, a brilliant clear atmosphere and a still dazzling sea. I looked after the baby in the morning and let the nurses go down and bathe and envied them all. We went to tea at the Bridsons this afternoon and found there the vast community of Jephsons and McMichaels as well. They are all a very jolly lot and each family consists of 6 so they are a vast collection.

Aug 29th, Sunday
Arthur took the service both morning and evening today of which I was glad as old Mr M is such a slowcoach. In the evening a Mr Paul Bridson preached. He is a curate at an extreme church in Worthing. He gave a good sermon but allusions to “Our Lady” and the sacrament of penance showed his views. 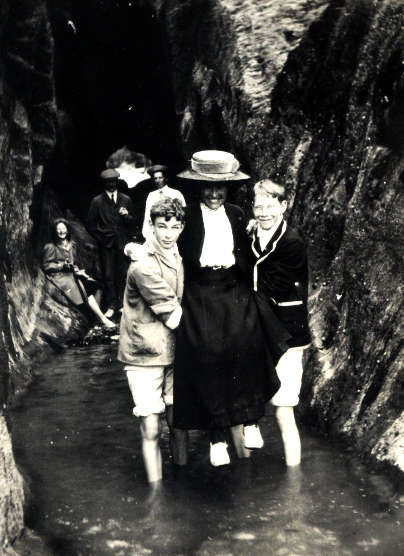 Aug 31st, Tuesday
This being one of the lowest tides of the year we walked to the far sandy bay , went on to the cave through the water over which Lyall and Arnold carried us queen’s chair fashion amidst shrieks of fear lest they should drop us into the water! Then we proceeded to the Squeezer through which we nearly all squeezed! The water was so deep that a long exposure of leg was necessary to get through dry skirted. After tea we all went down and watched the tide which was grand and all got more or less wet.