December 24th, Friday. Xmas Eve.
I really wonder how we have had time to breath today. It has been one long flight from point to point. Our breakfast being a late affair, 9.30 to 10, makes the day so short. I got Herman to wheel my barrow of rubbish to the church where I was joined by H and the Wingate’s maid. We did nearly the whole church. Back we flew and after lunch decorated the tree and arranged the presents in the billiard room. At 4 the hoards were upon us and we all had tea in the smoking room. Then at 4.30 the same bell which has been used since the beginning of time was rung and we all trooped in. This is the only moment of my life that I wish I were a child again, just to feel once more that feeling of enchantment at one’s first sight of the tree. It was all very festive and counting the servants we were 30 people. When it was all over we ended with a huge supper followed by games which broke up when the Macleans took their departure at 10. 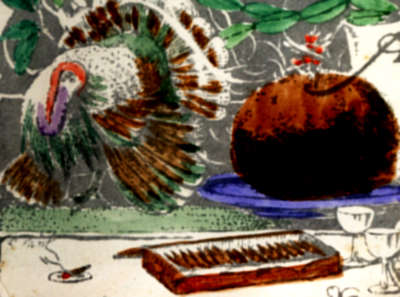 December 25th, Xmas Day
A bright, still and sunny day but no frost. The whole household turned out to church in the morning and all stayed to Communion. The church looked pretty and as we were the first to go up the household filled the rail. We spent the afternoon resting on our laurels and in the evening had a gay dinner with the usual crackers and health drinking and thoughts of absent friends. How this evening makes one long for all ones absent ones.

Dec 26th, Sunday
Once again to church with more Xmas hymns and another carol service in the evening. I had a lovely mail. We spent the afternoon in arranging and settling the toys for tomorrow’s village tree. Mother, Lena and I finding we were still 5 boys garments short Mother and I set to work to knit comforters and mittens all of which were finished at the appointed time. The evening was spent in quiet exhaustion.

Dec 27th
Our morning was spent in decorating the tree over at the church room. It is a very well shaped one this year and looked lovely and with its hundreds of crackers, toys and candles. As we were in the middle of it there gathered at the Rectory gates a vast assembly of people for the dray hunt and we squinted at them all through the windows.

Dec 28th, Tuesday
Oh! such a day we’ve had! By the end of we were once more dead with fatigue. At 11.30 a motor arrived from Bournemouth which took us all to the Macleans where we had a huge lunch and then proceeded to the theatre where the children saw their first pantomime. It was Robinson Crusoe and very well done and the children’s delight was immense. The scenery was excellent and the dances very clever but Crusoe being a girl in blue tights didn’t at all come up to their expectation and they wanted to know where his furry trousers were! We came straight home in a motor again, and the servants had a party tonight and had much dancing and joy and didn’t get back until 3.

Dec 29th, Wednesday
A perfect day, bright and sunny, but I was too busy writing mail letters to go out until after lunch when H and I took down the children’s bank books and put in their Xmas boxes. Some day perhaps they will appreciate the way in which we wrest all their pennies from them!
At 7 we trouped over to a fearsome village entertainment got up by the Miss Blakes and solely village talent was used. The climax was a moral little play called “Good Management” in which 4 maidens regaled us with good morals. We nearly died with laughing at it all and the esprit de corps was painfully evident.

Dec 30th
16 to lunch and then we set off for the Allingtons’ children party, I and the small ones in the closed and the rest in the 40 hp. We got a puncture and after half an hour were on our way again and it was a very jolly party with a funny man entertainment and dancing, a huge tea and crackers.

Dec 31st
The last day of this good old year and I am sorry to let it go. Lena and I walked down to Crawford in the afternoon on which the restoration has begun. The poor old place looks awfully tumbled down but will be splendid when finished. Tonight we had to have supper as the servants had their party on, so we played Bridge afterwards and then at the stroke opened all doors and windows, sang Auld Lang Syne, and drank healths.

And finally – a Christmas card from Herbert’s Sergeants, 33rd Brigade. 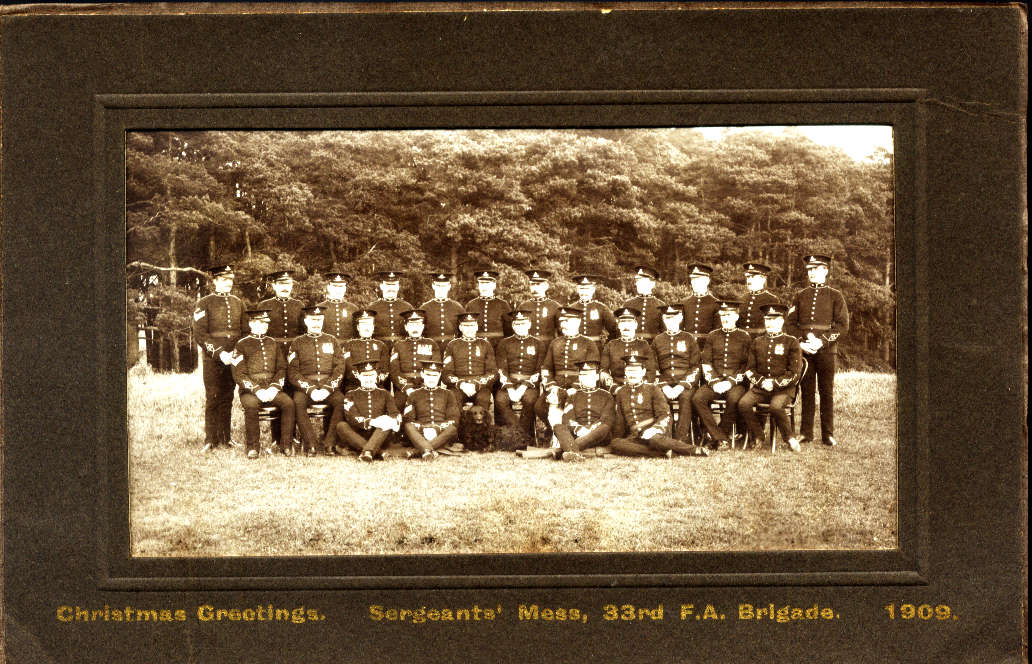