July 1st, Thursday
Oh! for my sins I had to go to a Sale of Work at Amesbury in aid of the League of Pity. I heard that they made £7.10 and I cannot imagine out of what as everyone seemed to be selling and no one buying. It rather irked me to have to spend it thus as it was a lovely day. Herbert went to Springfield today in order to go to the War Office tomorrow to see Colonel Mercer.

July 3rd, Saturday
I had a most strenuous day. Arose at 5.30 and started by the 7.0 train for London. It was a glorious day and very hot. On arrival I shopped all morning and met Herbert at Hatchetts after which we joined the Oldfields and saw “Mr Preedy and the Countess”, an excellent play at which we laughed much. We got back at 8.15. 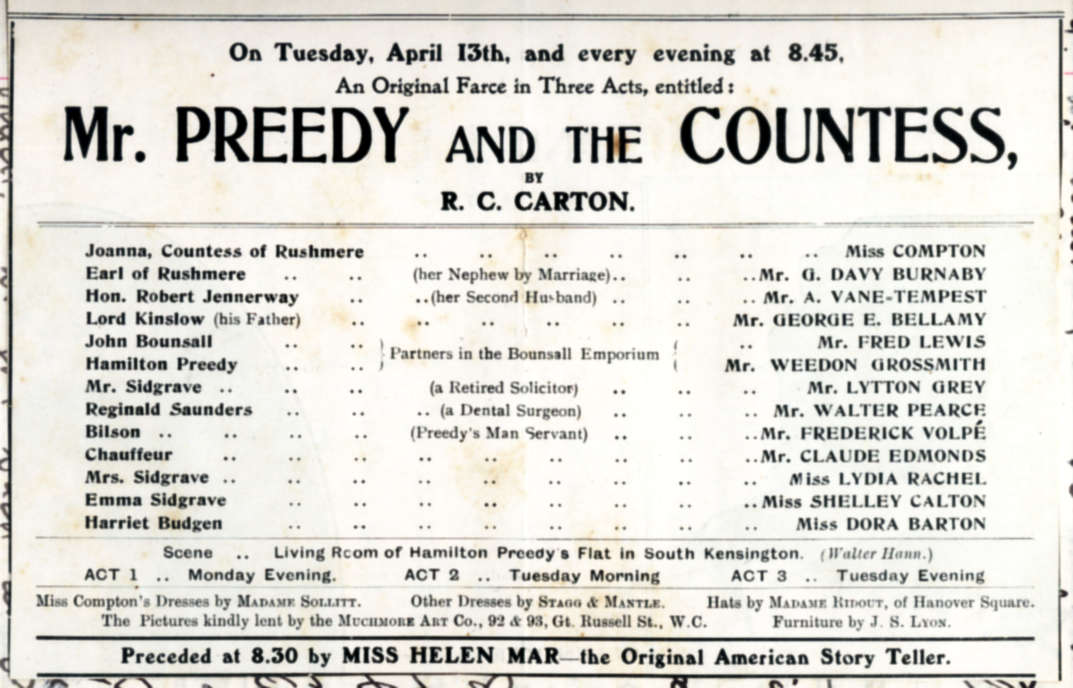 July 4th, Sunday
Church Parade as usual. To lunch came from the Camp Mr Bowles, Mr Maitland and Mr Batchelor, 3 nice boys. They told us the results of the practice, every battery of Horse Artillery have got seconds and poor F is worst of all having got 2nd for effect and discipline. It is a terrible blow for poor White T and when he came down to tea he was almost in tears. I am so sorry for them but I hear that the standard is very high and they just all simply failed to reach it.

July 5th
The weather has broken again. Thinking it was going to be fine we donned white clothes but it soon clouded over and after lunch when we drove up to the polo where the Cavalry School were playing it grew bitterly cold and began to rain. This summer is one of the most fretful and peevish I have ever known.

July 9th, Friday
We are really having no summer at all and when one thinks of all those weeks being wasted it is rather a trial. My poor little friend Mrs Cuthill is very ill again. It is a grief. She is such a nice woman and has such a splendid husband.

July 13th, Tuesday
Mother arrived at 1.46 bringing with her the usual joys from home: eggs, salad, flowers and tons more bazaar things. She is cheery but not well.

July 14th
Mother and I spent the whole morning ticketing and sorting out bazaar goods, such a job and such a relief to get them done. Her painted things are charming and have nearly all been requisitioned.

July 15th
Such a tiring day. We took the three children into Salisbury to get them photographed and Oh! the arrangings and posings and endless patience required for such a job. We were all worn out by the end and didn’t get back until 7.45 when we plunged into other clothes for dinner.