Sept 15th
We all went to Rockham today taking lunch but Poggy had an attack of his old fever and returned directly after lunch, I following. He gets these bouts periodically which last about 3 days and during which time he feels quite wretched.

Sept 18th, Saturday
A most perfect September day. I went to the beach with the children and lay on a rock until the tide went down. The Hellards came along and disported together in the cover where the Shrimps generally go. They too came round but disgusted at us took their departure! The Hellards live in the Arthurs’ house, consisting of father, son and three daughters and seem very nice and sahib-like.

Sept 19th, Sunday
To service twice, early and Mattins. Spent a glorious afternoon. Took my book and writing case to a grassy seat at the top of the highest cliff. The sun was brilliant and so little wind that the sapphire sea lay almost unruffled beneath me. The cliff fell away in sheer precipice and on either side the lovely rocky coast line stretched smiling in the warm and misty light. I felt lying there how simple one would find life if creeds and dogmas would leave one in peace. Far below on one side I saw three tiny specks and 2 larger ones: the children and nurses, and from an occasional squeal judged that Nootie was after her usual occupation of teazing the baby. Poggy joined me and we sat there very happy drinking in the beauty of our surroundings.

Sept 22nd
More sun, and had a ripping bathe. It was quite too lovely.

Sept 24th
Our last days here and packing are the chief feature of them.

Sept 25th
Horrid weather but H and I managed to crawl out and gather a few blackberries in a tearing hurricane, then had a beach tea and imagined we were warm.

Sept 27th, Monday
Left Lee at 9.30 and arrived at Springfield at six. It was not a bad journey. 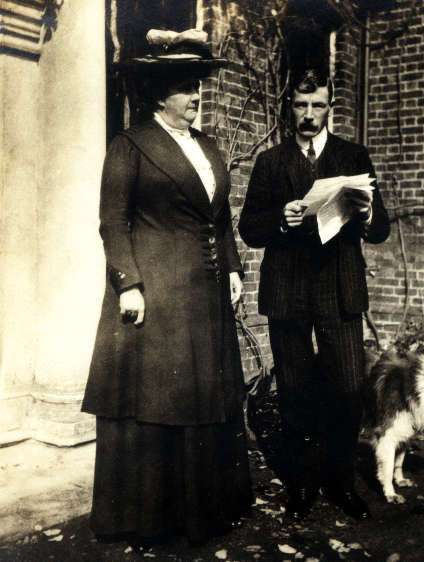 Sept 28th
On arrival here we found just Gertie besides Mother, also Georgie and Landon (see left) who have not long since arrived in England from the land of Jamaica. She seems well but looks dreadful, bad colour and is much stouter, 16 stone 8lbs. She is trying to reduce her weight by taking Bishops Varelettes.

Sept 29th
All day long yesterday and most of today it has poured with rain so that I have not moved from the house.

Sept 30th
An improvement in the weather but still no sun. Herbert and I walked down early to the town as he wanted to consult Dr Storrs about his leg which is giving him trouble with exzema but found him out. We went along the railway path and on either side the hedges were spangled all over with cobwebs, hundreds and thousands of them, all covered in heavy dew.