February 24th, Thursday
Still at it, and have reached the billiard room now (cutting the laurels!), in midst of which who should turn up but the Malingerer, I in the vilest and most filthy old clothes, snow boots and H’s gloves but no matter, she well understood. She stayed till six but did not keep up her reputation today in consequence of which Gran remarked when she left “how good-natured Amy is, she never speaks ill of anyone” !!!

Feb 25th
Worked in showers and a gale, and I felt bedraggled and horrible by lunch but we have just on finished the laurels now thanks be and we planted out the rockery and painted a frame before we came in for tea.

Feb 26th
This day was given up to sweeping and cleaning. Blake, Legg, H and I went at it hard and the sun was so hot I got quite heated but sweeping grass is a hot job and most of our brooms are as much use as a sick headache. It has been a perfect day and I fetched Gran down, wrapped her up in a rug and sat her in the verandah where she had a sun bath. The whole place looked lovely, not a twig or leaf t be seen and we preened ourselves. I love these early Spring days so much words fail one. Indeed it is a feeling not to be expressed. All I know is that with each returning year I appreciate it more.

Feb 27th, Sunday
The sun still holds but the icy winds from the North held and has dried up the roads most wonderfully. We went to early service and then we all, Gran included, went to 11.0 but the dear PB gives us too much, we were not out until just on 12.30. It is wearying I find to leave Mattins, Litany, Communion and Sermon when one comes to think that we have been through the whole of ante communion twice today making a repetition of the Lord’s Prayer no less than seven times not counting evensong it really becomes too much. If it were not a duty I for one would not go so often as I think one’s religion should not be made a “duty”.

February 28th, Monday          Town
It turned out a dull and rainy morning nevertheless my dear Poggy drove in to B with me and walked back. We stopped at Langton and picked up Mr Salmon who Mother has asked up on this jaunt with me. We accomplished our journey quite comfortably though for some reason it was crowded and airless. We got to Pelham Place at 2.30 and there found Mother and Herman, the latter up for his Sandhurst exam who left to partake of his torture soon after we arrived. BGS came into tea and we all had a great buck. After dinner we all went down to the Hippodrome so as not to lose a moment of our valuable time and were entertained by an excellent programme. The sea lions were especially wonderful and Winifred Emery and Lewis Walker both very good in their respective plays. Quite a good show. 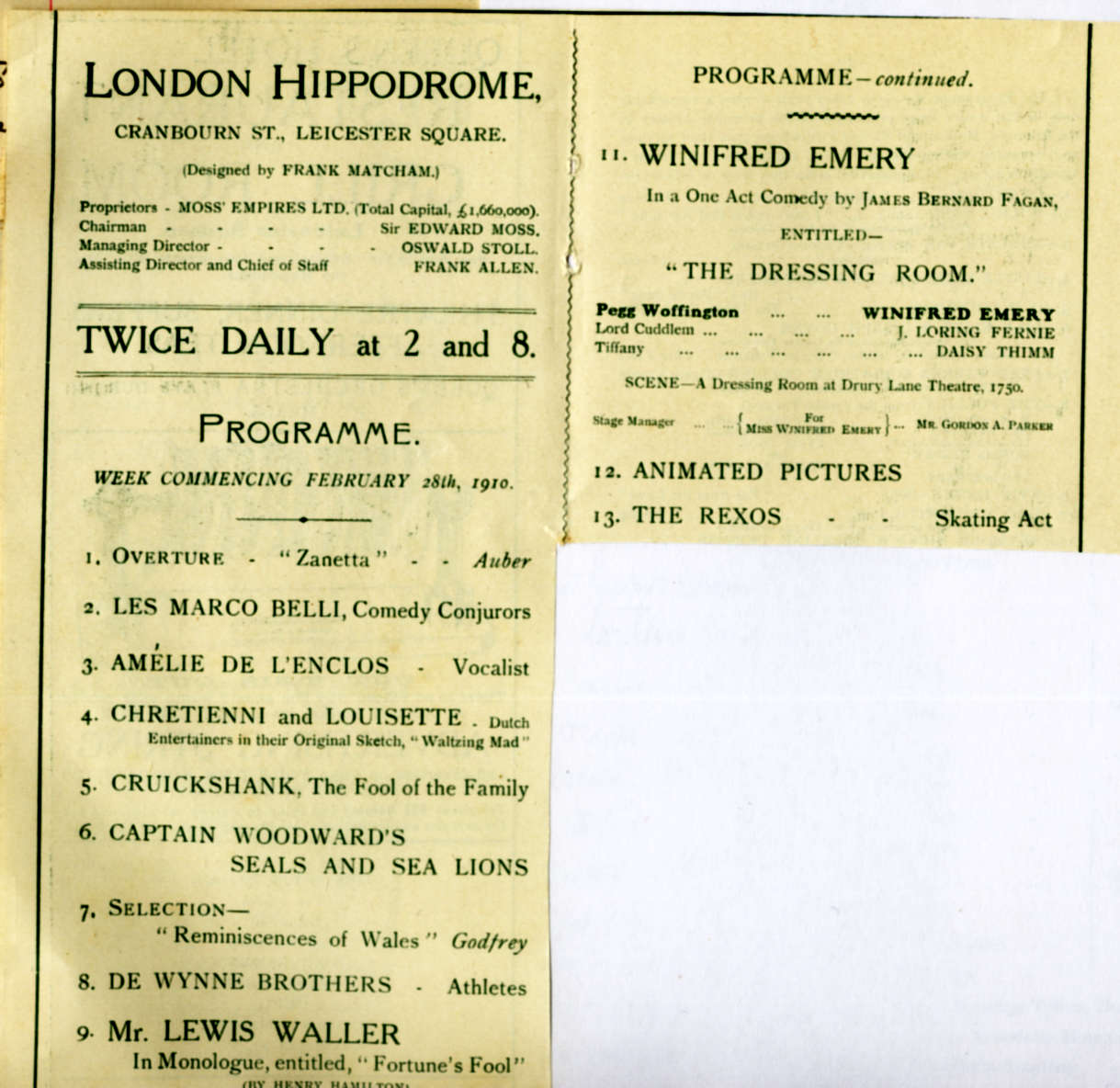