January 9th, Sunday
The weather has got far worse and it was too awful to go to Kirk so I had a real good laze and read books. I got hold of a charming one by Conan Doyle called “Through the Magic Door” on literature.
Frank makes endless plans for the day then alters them down to the most minute detail until one is bewildered as to what he intends to do. He is a hearty eater but takes about 3 hours over his meals, cutting and mincing and arranging his food before each mouthful so that he is always a course behind us! 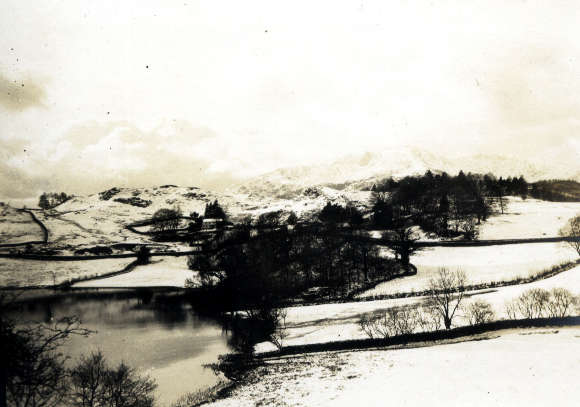 Jan 10th
At last the weather has broken and we see the sun. At 8 it began to climb and the effect of the early light on the farm and surrounding hills was lovely: pale pink and lemon through a veil of gauzy mist and I was seriously delayed in my dressing because I couldn’t take my eyes off it. After breakfast we walked with the men shooting, the wind was cold and boisterous and the sport none too brisk.

Jan 11th
A frightful day of snowstorm and hurricane, impossible to do anything but sit indoors and wile away the time by writing and reading, and I having developed a vile cold was not sorry to do so. In the evening there was a meeting of the Conservatives at Ambleside to which we went. The speakers were several local magnates and the Candidate for Westmoreland, Mr Sanderson. Their speeches were excellent, the hall was crowded and the back filled with radical roughs who heckled and booed much to the amusement of those on the platform. We are living in stirring times, what with controversies on Tariff Reform, Free Trade, Home Rule and National Defence. The latter being so much the most important it ought to overshadow all the others but it doesn’t, the whole community being swallowed up in Party Politics.

Jan 12th, Wednesday
A lovely day with perfect sunrise. Having driven to Ambleside in the morning with Maud I walked home and took several photos. After lunch we went for a walk. Our host and hostess are trying company, they walk hand in hand and embrace every few moments and it is really most embarrassing.

Jan 13th
After lunch we went to some of the most interesting theatricals I have ever seen. They are got up, written and managed by some people called Simpson, who write these plays in dialect and train the people themselves to act in them, each character was excellent and I am very glad to have seen them as they are becoming quite famous.

Jan 14th
In pitch darkness we got up and left High Close at 8, travelled all day and arrived at Brookfield at 8.30. I am very glad that I have been.  Our minds and that of the nation are full of elections now, the papers are most interesting and we read every speech of everyone come down in the train. Tomorrow polling. 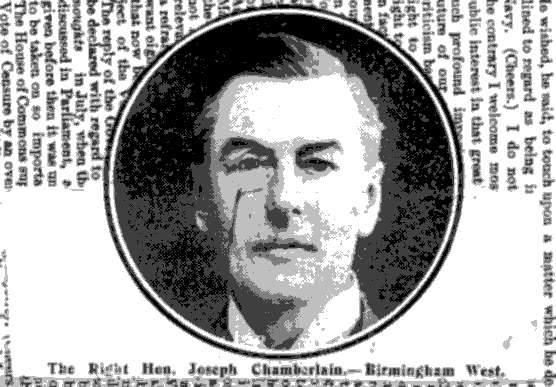 Jan 15th, Saturday
I am writing this in the evening and by now today’s polling will be over. There are stirring times and the papers are full of indignant speeches and protestations. The Radical members being for the most class rank outsiders flavour their sentiments with inaccuracies and blatant rot playing all the while for a fatuous gallery that doesn’t realize how terribly it is being duped. Joe Chamberlain issued a manifesto to the Kingdom yesterday which I stick in here and how can anyone reading it fail to be stirred. He is splendid and it is a cruel fate that denies the country his bodily presence in the House. He was elected yesterday being the first member in the Kingdom to be so.