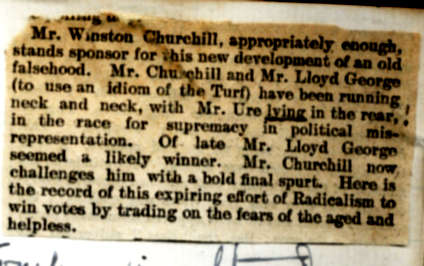 January 16th
A propos of the Old Age Pension Lie this cutting is rather good, although in these days Mr Ure is in a vast company of “liars”, many of the Radical leaders bearing him company. I also have here Chamberlain and Balfour’s joint call to the people which appeared in all the papers yesterday. It is a historic document (see previous panel).
Had a peaceful afternoon reading Lady Cardigan’s rotten book about which so much fuss has been made. It is ill written and she is a conceited old idiot and it certainly isn’t worth the fuss that’s being made about it.

January 17th, Monday
I am having the time of my life, a war is being waged against dust and microbes. Mrs Coombs is here and I am keeping her nose and those of the maids to the grindstone to such an extent that they’ll all be retroussé in future.

Jan 18th
I have been all the way to Eastleigh to meet a governess and finding her satisfactory I have decided to engage her. She is 35, nice looking and has excellent references and so I hope all is well. I had to go from Wimborne and Poggy came with me having to wait 5 hours for my return.

Jan 19th
The house cleaning continues. The drawing room was placed gently but firmly on the verandah and the dust and microbes were ejected. It took us the whole day. The Wingates came to tea. He is in a great way about the village radicalism. We get roughs over from Spetisbury who have sworn to have Sharp’s blood so Mr W got a policemen out from Blandford and all was quiet. We are in great form today having got Sir R Baker in for a majority of 149, a turnover of about 800 and I believe Blandford is in an uproar. The conservatives are winning many seats but having all the nationalists against them makes it nearly impossible to get an ultimate majority.

Jan 20th, Thursday
We hear today that Sanderson the Westmoreland man got in and also Prettyman at Chelmsford, both with huge majorities. Also Major Adam has turned Will Crooks out of Woolwich.

Jan 21st, Friday
I drove the two children into Blandford today to do a lot of shopping and have Pink’s hair cut. Another Dorset victory to record, Hambro for N Dorset got in with a majority of 1200 votes and everybody is most awfully excited.
I have been out inspecting the greenhouses. Mother has had them entirely rebuilt and they are just on finished and the result is lovely.

Jan 23rd, Sunday
After a perfect day yesterday we awoke to torrents of rain and an inky atmosphere. Herbert and I went to church but kept the children at home.

Jan 24th, Monday
Much rain but brighter. In the afternoon our day was spent in the stables painting the drive gates white. They are to have three coats and will look a bit better when completed but they are old and decrepit and one really needs new ones.