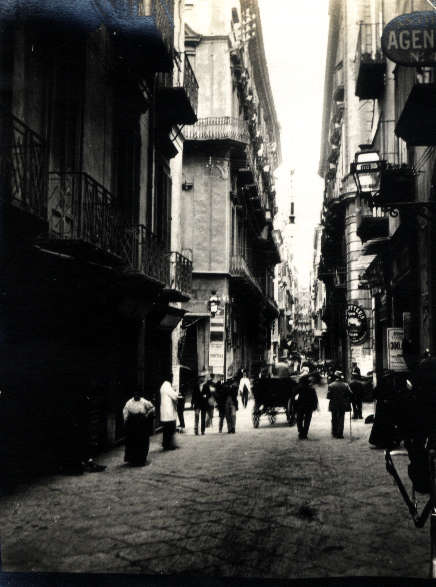 At 7 we arrived at Rome but I am hurrying through it. We are passing through Campagna, a vast undulating plain and the scene of much history. Far away in the distance is the Appian Way and I can see ancient tombs and all around seems perfect peace. The remains of the Aqueduct are here, the oldest being built in 312 BC and the latest before 537 AD because that year they were all cut off by order of the King of the Goths. Everywhere one sees the picturesque peasants at work, the women of course working as hard as the men, also children. Well at night Naples came in sight and oh! the glory of it, my Ell upon the platform! There are some moments in one’s life upon which one looks back and they all seem to be unreal. This is how I feel about that moment. Finding my luggage we drove up to Parkers Hotel where I washed, changed and had lunch and we then set forth to explore. We first went down to the Aquarium which is in the middle of the public garden, a most beautiful collection of deep sea fishes, then we strolled into the town and had coffee in the Galleria Umberto and then just went and explored. What a town and what slums! Frightful but so picturesque, many of the streets so narrow that they nearly meet overhead and all are steep. All have vegetable refuse and slops thrown into the middle much to the satisfaction of the straying fowl and dog. On either side are weird and greasy shops or rather dens from which issue forth male and female horrors, swarms of children, animals and smells innumerable.
The vegetation of the place is semi-tropical, palms, aloes, cacti grow everywhere whilst the creepers are perfectly immense: dark blue morning glory, bougainvillea, scarlet and pink geraniums and many other things. After dinner and much talk we went off to bed, I having been travelling since 9 on Monday morning! 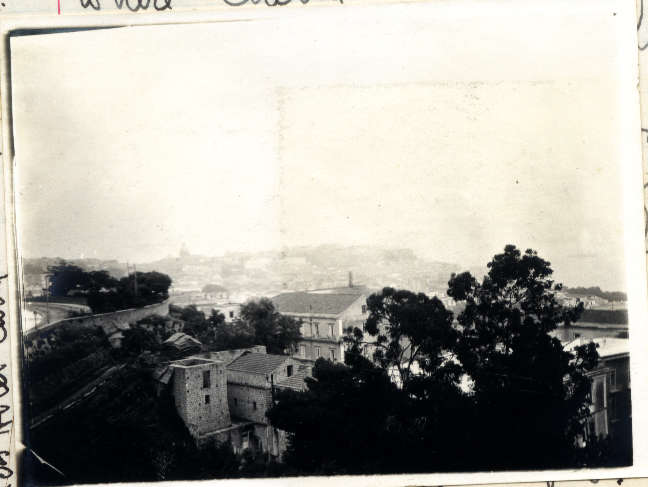 (The View from Parker’s Hotel)

June 2nd, Thursday
Hot, still and grey, but no sun. Off we went to the Museum where we stayed with an interval for lunch until 3.0. I was so intensely interested in its marvellous contents, one looks at the unique examples of statuary, the Farnese Bull and Hercules etc with awe. I was much engrossed too with the busts of the emperors, what evil faces for the most part. We then walked to the Cathedral which contains much that is lovely and a great deal which is tawdry, and then a long and enjoyable drive along the sea front until exhausted we returned to the hotel.

June 3rd
We arose at 6, or at least I did and went and routled (sic) Ell out of bed. We had breakfast served in my room and then caught the electric train to Pompei (sic). The dream of my life has come true, and words cannot describe this absolutely glorious day. How I have enjoyed it. As one walked through the preserved streets and houses one could picture the gay city life, one could see the chariots driving along those curious streets though now alas this stillness is oppressive, it is a veritable city of the dead and the haunt of bats and lizards. The latter are everywhere and dart about amongst the ruins and maidenhair ferns that grow all over everything. What interested me as much as anything was the place where excavating is being carried on now. It is just outside the city wall where the tombs begin. We waited until the workmen had gone to lunch and then went down to a waste place and excavated ourselves. The place is full of things and I found the portion of a dog’s skull, bits of pottery, glass and mosaic all of which I brought away. It was hard to come away.  (Pictures in next panel)

June 4th
Up again early and our expedition today was to Capri. We caught the steamer at 9, passing Sorrento, and arrived after 4 hours. I don’t think I have ever seen such a blue sea, brilliant royal blue turning to peacock blue in the shallows. We explored the famous Blue Grotto and made a boy dive in and he looked pale blue and sort of phosphorescent, a veritable fairy cave. Leaving this we got on board again and landed at Capri landing stage. 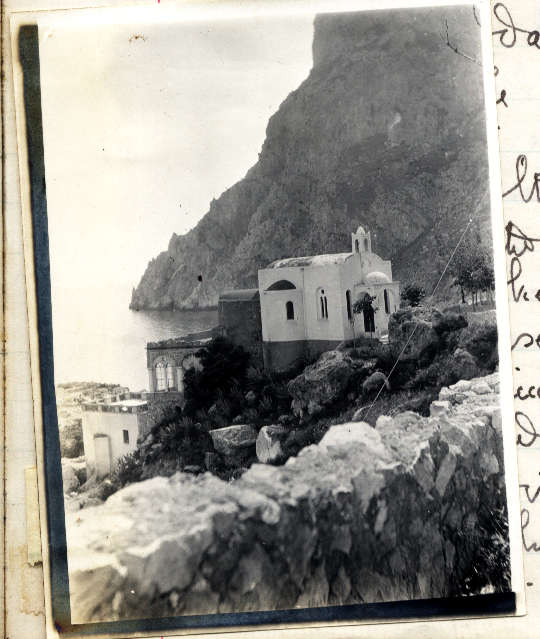 To escape the crowd of Cooks tourists we went up the hill and had lunch at the Hotel d’Italie but were well sold for we had to eat cats’ flesh and water soup for which we waited about an hour and paid 2.50 each! We then took a fiacre and drove over the island and down on the other side to a bay called the Piccola Marina (see right) where I hoped to find shells but there was nothing. We returned to our boat and sadly sailed away, the evening sun casting a misty heat glow all over the coastline which faded away into the distance.