June 5th, Sunday
We had intended going to the museum again but it was closed so we went to the Church of St Gennario della Poverie (sic – Ospedale San Gennaro dei Poveri) behind which are the catacombs. Arriving there one drives through an archway into a courtyard and garden of the hospice of old pensioners. There one leaves one’s conveyance and walks through another arch into another courtyard, this place with windows all round it barred but no glass, behind which chattered, sang and grinned a lot of men. On enquiry we learnt that they were lunatics awaiting removal to asylums, most gruesome. After inspecting the old church our old pensioner guide took us through the wonderful catacombs. They are high rows of galleries covered with small niches where the dead were laid. Many have frescoes, some of which are of pagan origin, and nearly all the bones are removed but we saw a huge pile near the entrance. One is quite glad to see the light of day again but the wonderful antiquity of it all awes one and one can picture those days of horrible persecution when the unfortunate Christians used to flee and hide in the depths of these gloomy tombs. After going on to two other churches we came on here to Rome 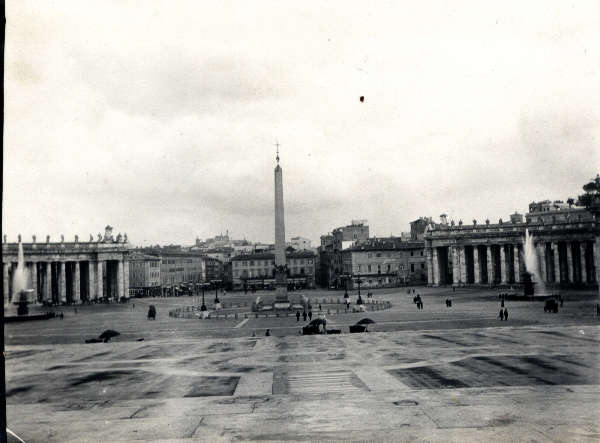 June 6th, Monday
We are at the Hotel Continental, a huge pile just opposite the station, a very well appointed house where beds are comfortable, food good, rooms small, servants leisurely and prices high. We set forth at 10 on our own and drove to the Vatican, to the museum of statuary, the Sistine Chapel and St Peter’s. I was glad to see the former which contains some of the finest pieces of statuary in the world, but oh! how one longs to live with all these things for months and not only a few hours. As we left the sun shone through three of the high square windows casting three huge beams of light exactly over the papal altar, a suggestion of the sign of the Trinity, it was most curious and I have never seen a more beautiful effect. This altar is erected over the supposed tomb of St Peter around which is a marble balustrade where stand 93 lamps set in golden holders and which are always kept burning. We descended into the little vault in which kneels the figure of Pius VI by Canova and we peered into a little glass covered cupboard which contained a golden casket holding the stole of the pope.
From the sublime to the ridiculous. We ended the day going to a very inferior music hall with friends of Ell. They are singularly badly off over here for such things as theatres etc but spend most of their time at the opera. 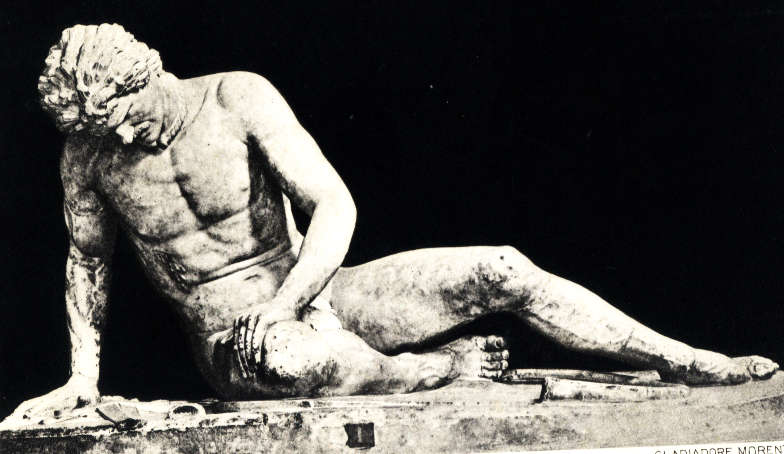 June 7th
Setting out early we went to the Capitol and engaged a guide. He proved most efficient and showed us everything. We went first into the square which is the work of Michelangelo, and to the museum, a city of stone people including the Dying Gaul and the Dying Gladiator, which I especially liked, it is a beautiful face and I insert here a PC of it. 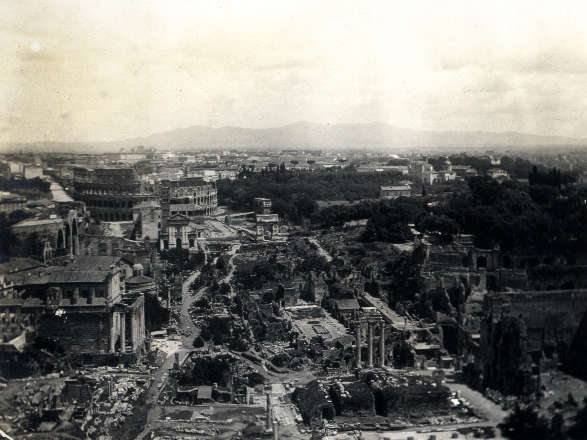 We then proceeded to the Tabularium and ascended to the top of the bell tower where we had a splendid view (right) . Driving to the Aventine we had lunch overlooking the Circus Maximus and then went to the Catacombs, a strange bogey hole indeed. We groped about there with our tapers and found much to interest us. Coming into the light we felt grateful for the warm sun, so different from the ice cold atmosphere of underground, and drove via the Carraculla Baths to the Mamertine Prison, a small circular chamber cut in solid rock. In the centre is a round hole opening to a lower cell in which St Peter and St Paul are said to have been imprisoned. There is a passage from it to the Cloaca Maxima, the main sewer which connects to the Tiber and down this the dead bodies of the prisoners were carried. After this we drove home, our heads and minds filled with all we had seen.
(Wynne goes into great detail here, but it might be more useful to place the photos she took then as a comparison with today – more in next panel)