June 8th, Wednesday
Another early start and a drive to the Forum. My foolish and feeble words cannot express the wonder and the interest of this most wonderful place, the heart of Roman civilisation where one sees the remains of five periods: prehistoric, Kings, Republic, Imperial and Christian. Late excavations have brought to light stone cut tombs of the Etruscan period and there lies a huge skeleton in perfect preservation which measured about six and a half feet. Then one is shown the black stone of Romulus upon which is a cypher no one can read, senate houses, rostra, basilicas, palaces all jumbled up together. 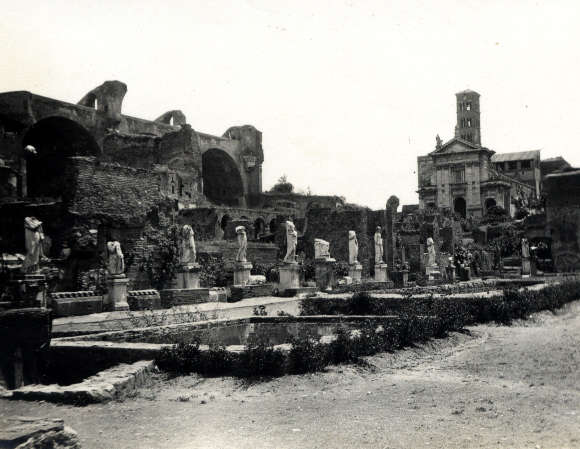 The house of the Vestal Virgin (see right) was specially interesting with its courtyard surrounded by statues, its smaller compartments and the room at one end containing the well and appliances for washing the sacred vessels. What a curious institution that was.
Passing from this most interesting place we went through the Arch of Titus to the Colosseum, standing there century after century in a wonderful state of preservation (you can see the Arch in the previous panel). One brings to mind the vast crowds and the arena where hundreds and thousands of men and animals lost their lives. A reminder of the evil times of bygone days when human life was counted as nothing. After lunch our guide came for us again and we drove to St John Lateran and the Scala Sancta which latter we went to see first. This flight of steps used by the Saviour were brought from Jerusalem by St Helena, the mother of Constantine. They are now incased in wood and may only be ascended on the knees. Three women were doing this when we were there. We visited also the Monastery of the Capuchins who church contains the celebrated Archangel Gabriel, a most beautiful work. It is said that the angel’s face is that of the unfortunate Beatrice Cenci whilst that of the devil’s is Pope Clement who condemned her to death.
A monk took us down to the burial vaults, truly a strange place and I put in a PC of it here 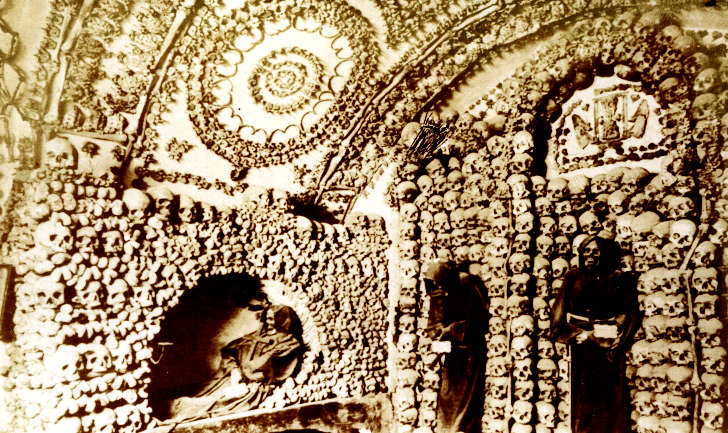 June 9th, Thursday
We left Rome last night by the 11.20 and took waggon-lits, arriving in perfect comfort at Florence at 6. After a wash and breakfast we went to the Uffizi Gallery. I went exploring after lunch by myself as Ell was fagged and went to bed. I wandered all over the place through odd little streets to the Ponte Vecchio with its small shops cramped together and overhanging the river. They were practically all jewellers shops.

June 10th, Friday
Off we went this morning and saw the Pitti Gallery, a vast collection of pictures whilst in the ground floor rooms are some perfect tapestries and the David of Michelangelo, a lovely piece of work. I saw today priceless works many of which one knew but little thought to see the originals. We spent the afternoon exploring and wandering, something I love to do.

June 11th, Saturday
I am busy trying to read up the history of some of the things I have seen whilst in Florence. We had a guide today and he was a waste of money, he knew nothing. He took us to the huge arched building containing statues, once the guard room for the Palazzo de Signore opposite which is built round a courtyard containing a beautiful little bronze fountain. On the first floor is a huge banqueting hall, the scene of Savonarola’s condemnation. One is also pointed out a room at the top of the town where Savonarola was imprisoned and outside the square where he was burned. One can see from his statue the light of a fanatic in his eyes. We have been too to the Bargello and also the Church of Sante Croce. One’s head swims with all one has seen and one simply cant sort it all out.

June 12th, Sunday
We left Florence today at 12, travelling all day and night, and reached Paris at 2.50 (ie: Monday) where we now are. It has without exception been the dirtiest journey I have ever experienced and when I arrived here I could not breath with comfort until I had had a bath. All the way from Pisa one travels along the sea coast through a network of tunnels which are as foul as the Underground used to be. The scenery is perfect but one sees nothing of it on account of them. After tea we strolled out and did a little shopping and ended our day by going to see the famous Chanticleer. It is very clever but I wish I could understand a little more.

June 14th, Tuesday
When we arrived yesterday the weather was vile and we were contemplating moving today but it is lovely this morning so we shall stay until tomorrow. We are at the Continental and it reminds me of the jolly few days Mother and I had here 11 years ago.
We spent the whole day at the Salon. All morning we inspected statuary and saw some lovely things but nothing that fascinated us very much. Still it is interesting to see the modern school after all the productions of olden times and in my humble opinion the former are not a patch on the latter. After lunch we went to the pictures where we found many splendid battle pictures and a great many of “la nue” but nothing very “French”.