March has come in lamb-like this year, alas! for the poor garden at the end of the month. I and Frank Salmon went off to shop and returned to lunch after which I flew off and did more shopping and after dinner we went to “The O’Flynn”, this perfectly splendid piece was a real treat but so different are people’s opinions that I have actually heard it badly crabbed. We all enjoyed it immensely, beautifully staged with a lot of plot and much thrilling incident about it. Tree as usual is splendid, only perhaps he is not quite gay enough for an Irishman and also he is very plain and looks a fright however his cleverness redeems all and I fear I am very biased in his favour. I love also Henry Ainley, a most fascinating villain.

March 2nd, Wed
We are a dissipated party in this house and keep such late hours at each end of the day that the mornings are too short to do much. We do not breakfast until just before 10 and getting up from table nearer 11, therefore FS and I started off to do a matinee at 12.30 and did without lunch. We went and stood for a pit at the Queens to see “Dr Jekyll and Mr Hyde” and I don’t think I have ever been so gruesed (sic – from gruesome?) in my life, it was literally frightful and at the end of the 1st Act I felt I must come out!! When we returned I found Capt Newcome had come to call. He looks well and we had a long buck about Bulford. This evening we didn’t go out but had a dinner party

March 3rd
As soon as our laziness would allow we trooped down to breakfast and then on to Harrods where I bought toys for the children. After lunch FS and I went and stood for another pit, this time “The Follies” where I laughed again and enjoyed these dear delightful creatures until my sides ached. We got front row Pit, excellent seats and select company! We walked afterwards to the Piccadilly where we had tea and listened to the music till 6 and then hurried home in time to dress for dinner and set forth again to see “Tantalizing Tommy”, a farce of Cyril Maude’s , quite good but not worthy of him I don’t think though it was an amusing evening.

March 4th
I went off West to get my garden skirt at Dales which is a present from Herbert, had a biscuit at the club and then went to the Natural History Museum. We had just begun to go round when Mother rushed in in a state of agitation as on looking through the theatre tickets found that on the previous night when I got out the others I must have thrown away the pass for the box tomorrow so we rushed off to Covent Garden where they sent us to the Bedford Estate office and there we had the affair settled.

March 5th
Charles Maclean’s birthday! With what feelings of emotion I should have greeted this day 12 or 14 years ago!! I hied me off to Douglas where I sat for one and a half hours then lunched. H rushed of for a quarter hour oral French, returned and called for me at 3 and we went to the Palace to see that abandoned female lady Stewart Richardson dance in her airy costume. The aristocracy are nothing if not eccentric.
(They went to the Palace Theatre of Varieties, now the Palace Theatre in Cambridge Circus. It was the custom to drop in and out of these performances. As you can see from the programme in the next panel, they probably only arrived in time to see Mille Polaire and really only wanted to see Lady Stewart Richardson who was the object of much scandalous talk as she had been banned from polite society by the King).
Afterwards we betook ourselves to the Opera. What can one say of such weird music as Strauss’, frankly I admit I am not educated up to it but of course it is most wonderful and the way Beecham manages his orchestra is a thing to be wondered at.
(They saw “Elektra” – this was the first Strauss opera performed in Britain, and it was its UK premiere. It premiered in Europe in 1909)
We ended up at the Troc with supper. It was pretty full but a couple of very dull looking people were sitting at No 90 and I felt inclined to ask them their business at my table! 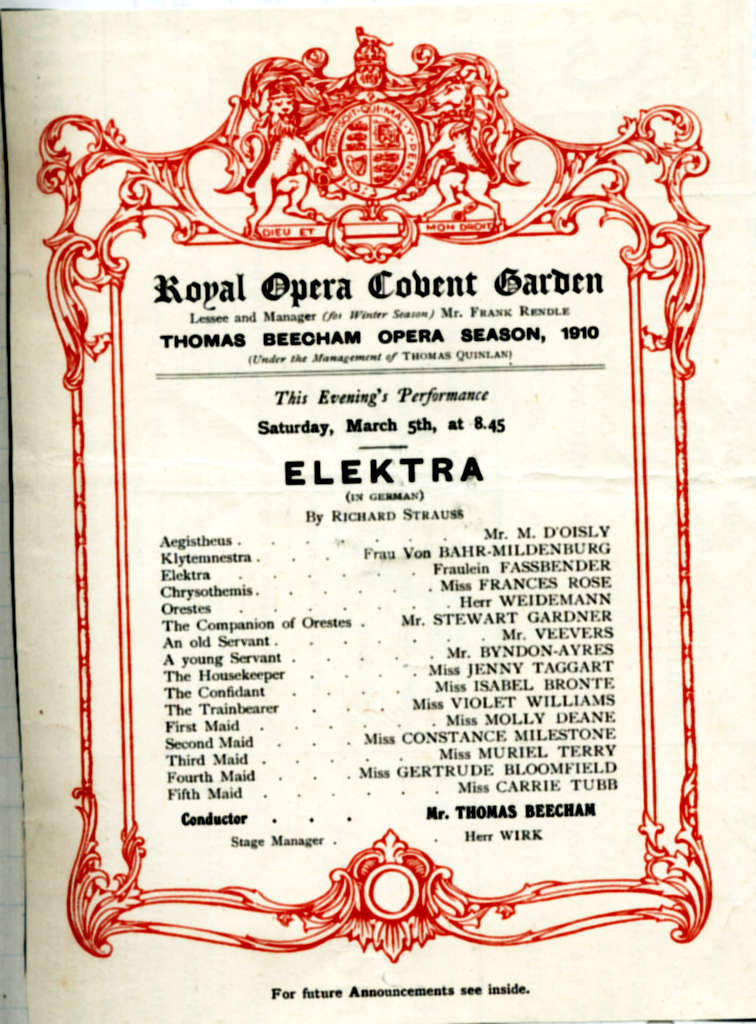 March 6th, Sunday
We all went to St Peter’s Eaton Sq this morning and heard an excellent sermon. After lunch to the Albert Hall to hear the New Symphony Orchestra give a delightful thing of Tchaikowski’s and Wagner etc and at 7.0 H and i went to Holy Trinity Sloane Square. Gamble preached a very clever sermon but it all took so long we didn’t get out until 8.30.