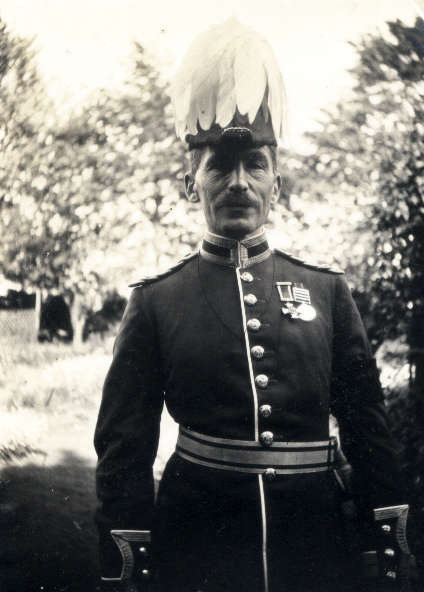 May 20th, Friday The King’s Funeral
At 3.10 we rose and in the grey light of dawn we breakfasted and caught the 4.49. The dawn broke and the sun rose like a great golden ball, it was a most perfect morning, still, warm and fresh. It all looked so still and perfect that one could not realize the hurrying and restless crowd coming from all parts of the country to do honour to the dead king. By the time we reached Waterloo one realized it soon enough, for there the place was thronged with hundreds of people. We went by tube to Edgware Road and from there walked to Oxford Terrace and by 7.30 were in our seats which thank goodness was on the shady side. Those opposite had the full sun on them the whole morning. Many men and women had to be carried away fainting to some spot where aid was administered. At length after 3 hours one realized by the sudden hush that the procession drew near, headed by an officer of the headquarters staff. After various units the coffin came in sight drawn by 8 horses of BB Battery draped with a silken Union Jack and on it the crown and regalia. It was followed by the charger whose stirrups held the reverse boots and the most pathetic touch was the King’s little dog led by a Highlander. Then came King George, on his right the Kaiser, and his left the Duke of Connaught and immediately behind them seven other kings, such a concourse as one had never before seen followed by all the foreign representatives. One’s sympathy went out to the poor Queen Mother whose coach was first of a long line of gorgeous gilded state coaches and in the one directly behind sat the Queen and her two children, the eldest boy Duke of Cornwall and the little Princess. All the royal ladies were so closely veiled in mourning that one hardly saw them. The massed bands played Chopin’s funeral march which added to the solemnity and awe. The streets all decorated with purple, black and white and thronged with a seething mass of black robed humanity presented an extraordinary sight.
We got away as soon as possible and found Herbert’s uniform a very great help acting a it did as a pass into the thoroughfare where the populace had not been allowed to go. We had lunch at my Club which refreshed us and tea time saw us home again.

May 21st
Such glorious weather, all to do with the old Comet they say. We were by the way supposed to have passed through its tail on Wednesday night but we slept peacefully, ignorant of the fact, and so no one saw anything of it on account of cloud. (Wynne is referring to the appearance of Halley’s Comet, making its regular reappearance every 75-76 years).

May 22nd, Sunday
General Lawson, Captain Kentish and Mr Don came to tea. The General seems very nice and pleasant and we are to dine with him on Tuesday. It was jolly seeing Mr Don again after a lapse of so many years. Kildare seems a long time ago.

May 23rd
I had a shock on Saturday. H didn’t come home till very late but I thought nothing of it as he is often late. When he didn’t turn up till 3  (in the afternoon) I had begun to wonder and heard him calling in the hall. I went down to find he had had a spill from his machine, a boy had run into him and sent him flying. He was much bruised and shaken and has two bad places on his face. I am thankful he is better today but has felt the effect of the shock a good deal.

May 24th, Tuesday
Hi is getting all right and his face is healing well. This afternoon we went to write our names in the Commander in Chief’s book and I afterwards called on Mrs Robertson finding her and home. We dined tonight at the General’s (Lawson) and found ourselves a party of 10. Dinner was excellent and beautifully served and the table decorated with pink sweet peas and Sheffield plate. He has a huge house full of lovely things and is a great collector of objects d’arts (sic). A charming man. General Burton was there with whom I had much conversation about Italy. I enjoyed it very much and it felt very nice to be among soldier folk once again.

May 25th
I went up to Town today and drove straight to Cook where I procured my ticket and all necessary information.

May 27th, Friday
A glorious day. I drove over to the Hurdwoods this afternoon. The road there lies along past Waverley Abbey and I have seldom seen anything more perfect with the young green of the birches and beeches mixed in with the pines. I was charmed with their delightful house and garden. It seems dreadful to think that finances are so low they intend selling. The Dr looks well but thinner, likewise Geoff. Fergus is busy on a statuette. He is wonderfully clever and does such beautiful things. (Wynne was friends of the daughter, “Joe”. Fergus Hurdwood had been a student at the Herkomer School of Art in Bushey).

May 28th
I took the children down to the town to have their hair washed. To lunch came Joe Hurdwood who also went down and came back to tea. Poor girl she is very depressed over family affairs and one wonders what is going to happen.