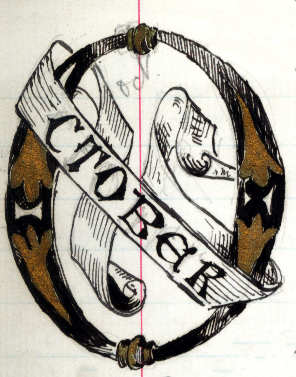 How this year has flown. Poggy and I drove to Wimborne, a heavy white mist lay over the land which turned later to rain and a thunderstorm.

Oct 2nd, Sunday
H and I to church, the two heathens (Ell and Mother) stayed at home. We went to see the George Fianders after service and I walked down to Mrs Coombs who, poor woman, is bed ridden now and in terrible pain always.

October 3rd
H and I left home this morning for Springfield and Ell went off to Frankie McNamara’s wedding. He is best man. We missed our connection at Liverpool Street and so waited till the 4.18 express. We found all well at Springfield, Mother in excellent health.

October 5th
A glorious day of brilliant sunshine, a glistening heavy dew and millions of spider webs hanging over every bush. Herbert wheeled Mother round the garden whilst Mary and I strolled after them. At 1.0 we left for Town driving to the Strand Palace Hotel where we managed to get taken in. We went to see “Priscilla Runs Away” in which Miss Neilson Terry, Terry’s daughter, makes her debut. It is a nice little play and she is an attractive creature but hasn’t the looks of her mother.

Oct 6th
We spent a busy day today, the morning all in the city where we went firstly to an agent called Rawn and Alder who gave us “orders” for various city houses where we went to get linen, blankets, quilts and cretonne. Our road took us into the quaintest old places, Gresham St and Farringdon St, Smithfield Market, Love Lane and Bear Alley etc. We went also to look up Tom (Jackson, Herbert’s brother) and just caught him going out so walked with him to his brewery by way of Tower Walk. I had never been there . It is a promenade of rough old stones with an avenue of trees under the Tower on the river bank, so pretty and almost untouched by the 20th century. On retracing our steps we passed by “All Hallows Barking by the Tower”, an old church which escaped the 1666 fire. It contains most beautiful oak carving, glass and iron work including three lovely sword rests of Lord Mayors in bygone times.
After shopping, to dinner at the “Troc” came the Grays after which we went to see “Nobody’s Daughter” where Du Maurier is acting. It is a splendid thing and I enjoyed it awfully.

Oct 7th
After doing various other items of shopping and having a chop at the Grand Grill room we found we had an hour’s leisure and so strolled down the Strand and on reaching the Law courts we went in and inspected this wonderful building. It is a curious place with its huge central gothic hall and all its hundreds of courts surrounding it. We went into the famous divorce court and criminal court, scenes of historic memories. We came down (ie: home) by the 3.5 and dined out this evening.