June 19th, Monday
Alas the weather has really broken and all are fear and trembling for Thursday, it will be a real calamity if Coronation Day should be wet. The Lomaxs garden party was on today and so H and I drove to the Club where it was held. There was to have been a cricket match but it was too wet to play so we all just sat inside and had tea and listened to the R.A. band. It was a fearful sell for the poor Ls as they had expected 600 people and at the most there couldn’t have been more than 100.

June 20th
Thirteen years ago today my dear Father died – 13 years – it seems all that somehow and yet how short a time to look back on in comparison to looking forward, and how very much has happened in it all, all the most important events of my life.

June 21st, Wednesday
A day at home and one with nothing on, what a blessed relief. I sent Bessie and Maggie up to Town with Mrs Young (her servants) to see the decorations. They came home full of it and I fancy it must be lovely but the weather looks bad tonight alas. 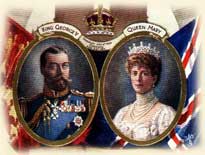 June 22nd
King George V Crowned Today!
How frightful to look out of the window this morning to find a gale blowing and drizzling rain descending, and to know that for hours many thousands had been waiting and hanging about already, poor people. I felt thankful that I had given up my original intention of going up to take my chance in the street. We all trooped off to the Coronation Service which I thought rather gloomy and the rain poured down, the village band played the children down to Church and away, starting back all in different keys, and after lunch the festivities commenced on the green, the poor children trying to do their dances whilst the band let forth watering miserable tunes.

June 23rd
It was still raining this morning when we arose from our beds much depressed by the gloomy outlook at 4.30! However we determined to go, and accordingly caught the 6.30 train, and on arrival took the Tube to Embankment from whence we walked to our stand at the Mall through the gaily decorated streets. There was no crush whatever and everything was quiet and orderly. We put our coats down on our seats and then walked up and down inspecting decorations, troops and crowds, besides meeting many friends on the same errand. At last it was time to take our seats and soon the Procession came in sight. I have since heard it described as “dull”, of people being “bored to death”. Not wishing to be intolerant I cannot understand the mind that can remain unmoved by what we saw pass, the colour alone gets into ones throat to quote Kipling, and when one realised what it all meant one could not help feeling most justly proud of all it represented. With the exception of a group of officers who were taken from the regiments of which the King is Hon Colonel, there was not a foreigner among them, the whole Procession was composed of Home troops and those of the Colonies and in the midst drove the King and Queen in their wonderful gilded coach drawn by 8 cream coloured horses covered with harness of scarlet and gold led by grooms in golden livery. Troop after Troop of Household Cavalry, Hussars, Lancers, Dragoons, Guards Artillery, besides all the Colonial contingents including a big group of native officers in their perfect uniforms sitting their horses as only a native officer can. I thought it all perfect and the people cheered and cheered again as it all went by. When at length it had all passed we made out way to the Club where we had lunch and so home by the 4.12.