March 1st
This month has come in fairly quietly as far as weather is concerned, but the dreaded Coal Strike is now in full swing and thousands of workers are idle, every one is in a scare ordering supplies of food and coal which already has risen enormously and one can’t imagine what the poor are to do through it all.

March 2nd
I went off at 10.30 this morning taking No 19 for Bond Street in order to go to Douglas (her hairdresser), on alighting I noticed unusual crowds and then found that all along the street in every direction that the Suffragettes had been at work smashing shop windows. Up Bond Street almost every other window was in fragments, Duveen, Asprey, Truffitt, Harborow, Lucana etc etc…all had things pasted over the holes, some with labels marked “suffragettes”, up Regent Street, Piccadilly, Strand etc…all was the same everywhere, rack and ruin, and I believe about £4000 worth of damage was done, it made one ashamed to be a woman. Of course they are all clapped into prison and I do hope the sentences will be heavy.
Drove to L’pool Station and saw Tom off, on arriving there I found I had left my little bag in the taxi, so sickening but I shall try at Scotland Yard on Monday.

March 3rd, Sunday
I induced Mother to come to the City Temple with me today to hear Campbell preach – it is a curious service nearly all singing, and a long sermon which seemed like a few minutes.

March 4th
Mother and I drove first to Scotland Yard where to my great joy I found my beloved bag – such luck! Then to Harrods to order provisions against the rise in prices, there all along the road we found the Suffragettes had just been at work again, fragments and smashes all along Sloane Street and Harrods itself much damaged and everyone in a state of great excitement. 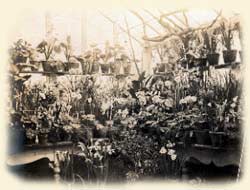 March 5th
We found all very nice at home (at Upper Hale, Farnham) and it is delightful being back again (Wynne had had a long visit to her in-laws, with breaks in London, throughout February). My joy would be still greater if it weren’t for parochial work which at once rears its dragon head at me on arrival but one can’t play for ever and I must now set to work with renewed vigour. I find the whole house so beautifully clean, it is a joy to see and the flowers are simply perfect – the drawing room full of them and the conservatory a perfect blaze of daffodils, jonquils, narcissi, hiacinths (sic) and tulips. I spent a busy day setting many household chores to rights, paying house accounts, ordering stores etc in fact all the things which compose a hausfrau’s duties. Of course one feels a bit flat and unprofitable after such a lovely bust as I have had. The Strike continues everything is at a standstill and the situation most serious. How and when will it all end.

March 6th
I spent the morning writing letters and after lunch the Grays drove us to Aldershot to the finals of the Football Matches where I presented the Shield and medals to the winners of the season’s efforts. Our Division won and the enthusiasm was great.

March 7th
I made cakes and wrote letters all morning – the cakes were a failure much too hot an oven and so they rose up at once to opulence and then sank back exhausted! However I’ll not be beat but try again tomorrow.

March 8th
More cakes and with great success this time! (This battle continued through March. Since people cooked on a range, with no control over temperature, it became a matter of judgement and luck whether things would emerge cooked, burnt or raw! The good cooks developed a sort of instinct about their ovens, and learnt how to regulate the fire).