May 26th
I have got a fearsome cold, a real bad summer one. The heat has suddenly become intense and today and tomorrow all the bedding out has to be done. I’m not enthusiastic and would just as soon bury old boots.

May 27th
All is finished, tidy and neat once more, the glorious Spring colour has gone and in their place sticky geraniums and leggy daisies poke out their straggly ends, all will look right in time doubtless, but at present they all look positively affronted. I went to Shirts today for Mrs P seems – seems quite odd being at the old game again and then I gardened till past 8.0! being alone it doesn’t matter when one comes in to dinner which is rather nice. 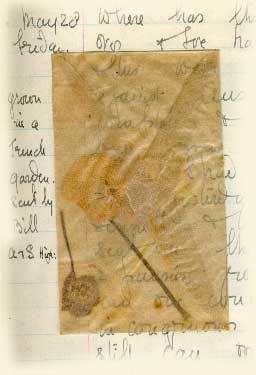 May 28th
Where has this month gone, it’s nearly over and I’ve hardly realized its come, and this week Italy declared war against Austria so now we’re all complete and a Coalition Government has been formed and conscription is in view. I had 3 letters from the Front yesterday, one from Bill, Sinnott and William Gilham. The first sent me these great treasures, 2 pansies from his trench garden! Can one conceive anything more incongruous, thank goodness they still can make gardens and monkey tricks. The 3rd must be either in Egypt or Dardanelles I think, and writes the quaintest letter. I was so glad to hear all are well. (Sinnott had been the groom at Hale, and Gilham the stable lad).
I have been gardening the whole day. All the time I have I put into my garden, there at any rate things are living, not dying, and one can forget for a space all the horror of the world.

May 29th
Oak Apple Day. I got a call from Mrs Stanley Clarke this morning asking me to go and help serve at the GMCA hut this afternoon at 2.0 to replace Mrs Harrington who has developed measles. Accordingly I went and till 5.30 we served refreshments and smokes as hard as we could go. Tea, coffee, buns, cake, chocolate etc all to be had for 1d a piece. Books, papers, writing materials and so on all provided free. Whilst we were there who should come in to pay a surprise visit but the King and Queen with Princess Mary, Princess Victoria, Queen Alexandra and the Empress Eugenie – the men were amazed! They went all round and after they had left the Queen sent back Lady Haig to say she had not realized that we ladies were serving or she would have spoken to us. I wish she had, it would have been so interesting. Rather an amusing thing happened, one fellow was asleep to whom as they passed the two Queens made bows and as he slowly roused himself Princess Mary laughingly said: “Get up, the King is passing” and he being half asleep replied: “The King. Oh! I’ve often seen him before”!

May 30th
Today being Trinity Sunday we are again treated to the Athanasian Creed and as I cannot hear these intolerant sentences thus thoughtlessly spoken I do not go today. How can the Church sanction it, but there – chacqun son goût, only it is not my goût! A cold and vile day, so cold I should like a fire.

May 31st
After a horribly cold day, we were treated to most beautiful weather today and alas most of it had to be spent at the Jumble Sale! which was held at the church room. We made exactly 5 pounds which was jolly good I thought as it was all rubbish. After this frivolity I, having met and been introduced to her in the morning, went to tea with Mrs Ferguson, a nice lady who lives at Lawday House. There I also met the Drakes who had come over from Farnborough, both he and she are so nice and I quite enjoyed my outing for one goes so seldom now-a-days, seeing so few people that its rather nice when one has made the effort.