September 26th, Sunday
My Noot got a bad attack of little Mary yesterday so I’ve kept her in bed all day and she is the better for a large dose of castor oil! Poor maid. I’ve been spending sometime ready over my diary of 1913, how full those days seemed but compared with these, full of emptiness. Think of the simple serenity of it all, one round of pleasures mixed with parochial duties and yet how busy one seemed, but now, how altered everything is. Oh! the hideousness of these awful times, the never- ending good-byes, the anxious days and nights, never knowing what you may hear next, the weary waiting and the deathly tiredness that comes over one at times as the days go on and more and more are drawn into the fearful conflict. Now both Bulgaria and Greece are in arms, the former to join with Germany and the latter with the Allies. The Russians continue to retreat, the fighting at the Dardanelles gets no forwarder, and our Western Front in spite of persistent rumours of a big move etc remains the same. A line I had from Bill two days ago said ” Dont worry about Herbert, he will not be in”, nothing more, and H himself writes that every day they hear heavy sounds of firing down south but don’t know who it is. (This was the Battle of Loos)

September 27th and 28th
A vile microbe has come here – my Noot has been so bad and so has my vile body. Dr Hussey has prescribed I eat nothing and lie squirming.

September 29th, Wednesday
Great news yesterday and today from the Front. The sound of persistent bombardment down south heard by H for 48 hours is now explained. A great attack has been planned and carried out by us and the French together, we apparently made headway of some considerable distance, captured about 2000 prisoners and 15 guns whilst the French in Champagne penetrated much further capturing and disabling 20,000 and 79 guns. Both our men are safe. H’s Division was not directly used but Ell was pretty well in it all, and his job was guarding prisoners because the man who was told off to do it was such a bad linguist. He said the mob who passed through his hands were a miserable crowd, knees through their breeches and boots tied on with string and all nearly boys. Oh! how one does just hope we follow it up.

September 30th
This morning amongst my letters there was one from Rita, on opening it I was stricken to read that dear Brownie was killed in action on or about the 25th or 26th. It is a great loss to me, he and I have always been such pals for years and now the life has gone to make up like countless others the sum total of this most hideous war. Only about ten days ago he was here spending the day with Aim being home on 7 days leave and his last letter to me must have been written only about three days before he died. Thank God Ell and H still are well but the times are indeed anxious and one dreads the next day. The weather has turned horribly cold just like winter and oh, the poor men soon will be freezing again. 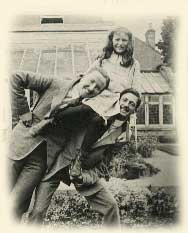 (Brownie is Bill Fallowfield, Wynne’s cousin. In this photo taken in 1913 he is on the right. Both Bill, and Wynne’s other cousin Herman pictured here playing with Ysobel, were killed in the War. Bill was killed on the 25th September – the first day of the Battle of Loos. This was a joint British and French offensive which started well but quickly collapsed. By the end of the battle in 1915 there were 50,000 casualties and nothing to show for it. Rudyard Kipling’s son died in the same battle two days later, on the 27th. Bill is buried at Cambrin Churchyard Extension, 200.2, Grave B17. You can read more about him in the October diary, and another picture is in the Family section. For Herman’s death, click here).

Ysobel, pictured above, remembers Bill as a bit of a wild card, like Herman. You can hear her memories of Herman if you use the “click here” link above.


To read the letters sent to the family, which they copied and circulated, click on the link. They are in the October section.