December 24th, Xmas Eve
Here is Xmas Eve and we have just finished filling the four stockings! It is getting late but I daren’t go to bed yet because on these occasions the kids don’t go to sleep for hours. I to Hospital this morning to clean up, then to Church to decorate, home to lunch and afterwards we decorated the house and tree and made paper chains afterwards, this latter reminded me so of old and ancient times. Tonight we actually had carol singers for the first time since the War began. I went to my old Almshouse people this morning to distribute a little tea. 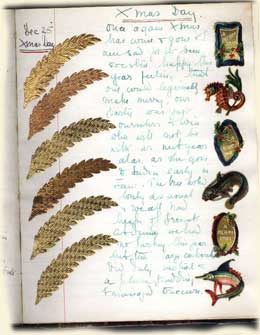 December 25th, Xmas Day
Once again Xmas has come and gone and I am sad for its been so extra happy this year feeling that one could legitimately make merry. At dinner we had no turkey, but two large cockerels did duty instead, and a plum pudding I managed to secure.

December 26th, Thursday
It has been horribly cold the last few days so it was an effort this evening to shed our warm garments and dress in flimsy fabrics for the Hayward’s dance, a children’s dance from 6 to 10.30. It was the first dance ours had been to. It was really jolly to see people dancing again after 4 years abstinence. Personally I frisked about with the children like a two year old and by the end of the evening I was dead! It seemed so strange to be actually dancing again – one has felt during these last four years as though everything were at an end.

December 27th
So mild again today but Oh! how I hate these inky mornings and getting up in complete darkness to feed the chickens is a torture, but they are repaying us well now and we get 9-10 eggs a day so I am hoping to sell some and help this food bill which is an awful one these days.

December 28th
I’ve spent my day in mending clothes, undressing the tree, washing brushes and cleaning chicken houses. Dear me how thrilling it all sounds.

December 29th
I have spent the day writing reams of letters. Postage these days with the extra ½d tacked on is really an awful expense, and the pounds one spends in stamps is appalling. (What would she make of postage costs today?!)
I am at present reading one of Walter Scott’s novels, how can I? is what I ask myself, but if one can get away from the stilted language and prudish ideas there is really much interesting history to be gleaned. This one is Anne of Geierstein, in two volumes and very small print.

December 30th
The papers contain the great news of the Coalition Victory, a clean majority. Amongst the list of defeated ministers are Asquith, McKenna, Snowdon, Ramsay-Macdonald and many other horrors. Our own member, Colonel Herbert, beat both the others and came out with a majority of 2933. I am rather amused at the women’s bid for seats. 16 stood and only one was returned, a Sinn Feiner from Dublin!!! However they’ll do better next time doubtless and meanwhile can air their opinions freely.

December 31st, Tuesday
The last day of the Old Year. Thank goodness that it and its preceding three have passed away. No such four years have ever brought with them such untold misery and anguish to the whole world and one now hopes that better and saner times may come for all of us that are left after this frightful upheaval. Tonight according to custom we all sat up and saw the New Year in. First we played games with halfpence in the pool. We then turned our attention to Table Turning but they wouldn’t work out, our company being too young and unformed to get up sufficient magnetic current! As the church clock struck 12 we opened the front door and all went out on to the starlit terrace and dancing round in a ring sang the usual Auld Lang Syne. The church bells were ringing far and near and continued to ring until 12.30. Tonight they are sounding the “All Clear”, and indeed it is a fine thing to feel we are “All Clear”, at any rate from War.

(At the end of 1918 Wynne stepped down from being President of the local W.I. and also Secretary of the Nursing Association, and by the end of the following year had left Hinton for ever.)