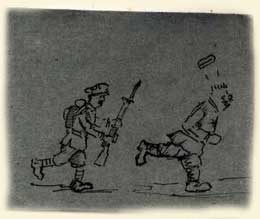 January 1st, Tuesday.
Here begins a New Year and New Diary. I wonder if I shall be as dilatory in writing this one as I was last year. I know that these days in which events race on there would be much of interest to put down if only I had the energy to write it but somehow with the War dragging on year after year our mind and body get utterly weary – weary of separations, anxieties, food problems and so forth.

January 2nd
Above will be seen pictures by Charles de Mornay, and as he is a coming celebrity artist I treasure them! (CdeM was school friend of her son. The cartoons depict English – top, Russian left and French soldier right). Pink this day has been discovered with Mumps. It means an endless quarantine.

January 3rd
To my sorrow Ell and Mother left today. We miss them much and though they’ve been here 10 days I’ve seen little or nothing of either having spent most of my time in the kitchen owing to Cathy’s absence. Ell was away shooting all yesterday with the Rawlins and Pink was to have gone too but alas poor child he of course was prevented.

January 4th
Sometimes I just wonder what is going to happen during the next six months where food is concerned, for its getting more and more difficult. Down here in the country we are not pressed in quite so many ways as they are in the big towns, but things like butter, tea, flour are all a struggle to get. Sugar cards are of course in force now and compulsory rationing for all is near at hand. Each individual now is allowed half a pound of sugar per week and so we use a good many substitutes such as saxine, honey, treacle and “sucradraw”, a clear sticky substance like glucose and corn syrup. We have indeed fallen upon evil times but in Germany all is far worse and thousands we know are really half starving whilst clothing is made of paper and shoe soles of wood.

January 5th
Whilst working up at hospital today Dr Sibbald has talked over the matter of our quarantine with the commandant and has decided that there must be no communication between us and them for a month at least. We now look forward to isolation for weeks, such a bore. I’ve been reading today in the paper about the frightful shortage of meat in the big towns and the endless queues that await food for hours at every big shop. Its really getting rather awful.

January 6th
We have our joint of meat today. There are thousands who have not, thousands of quite well to do people. As the paper says, “one cannot eat ones money or ones War Loan Certificates”, and this weekend meat was not there to buy. Smithfield yesterday must have been a scene of much distress and the shortage was terrible. I would not be Lord Rhondda or Arthur Yapp – they cannot know which way to turn. Truly these days the words “Give us this day our daily bread” have a true significance which they never really had before for thousands of us, and worse is to come.