January 21st. Monday
After 4 days of fearful weather it was simply perfect today, bright sunshine and a light Spring breeze was blowing around just searching out every leaf and blade of grass and brushing its face clean. Alas my son has gone back to college again, and I “drove” him to Yeovil in Holt’s car.

January 22nd
Again the sun shone and it is so very warm that we’ve had no stove lit. I have quite a gay Spring Pie, it contains primroses, catkins, polyanthus and daisies, also three daffodils I picked up yesterday at the station. We have been very busy today working at the bricks in the kitchen garden.

Jan 23rd
I have been busy over a few last jobs before going to Town, mending clothes, gardening, ordering my house etc. Now I pack up my horrible old rags and depart tomorrow by the 10.35. (Wynne has obviously overcome her previous concern about spending the money!)

Jan 24th, Thursday
By the 10.35 I departed, arriving rather late by a crowded train and reaching the flat by about 3.30. I found Mother very well and we proceeded to buck and have an early tea, for at 7 I had to be at Ell’s club to dine with him and do a theatre. I was as usual very much rejoiced to see my dear and we went afterwards to a play called Carminetta at the Princes in which Delysia is very clever and all the others good. From there we went to the Carlton and not being able to get a taxi drove along in a 4 wheeler! rolling up in style into the Palm Court of many joyous memories. We tried to get coffee and sandwiches and cigarettes but were informed that owing to regulations neither of the two latter could be bought! Curious times. (However they did get coffee, and Wynne enclosed the envelop with their sugar portion that came with it). 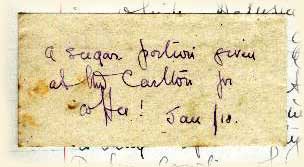 Jan 25th
As soon as I could drag my lazy body out of bed I hied me to Barkers and Pontings to do some shopping. This occupation is however a farce, one may go armed with money and a basket as everyone now does but as there is very little to buy one spends hours in waiting and comes away disappointed. At 12.30 we lunched and proceeded immediately afterwards to the Pantomime where we were joined by Lady Fulton. It was much the same old show as ever but one missed George Graves who is now at the Colliseum and I wasn’t awfully amused. Still it is always worth seeing and the Duke’s box makes it a very comfortable way of spending the afternoon. What horribly blasé sentiments!

Jan 26th
Away in the morning to shop at Evans. Food stuffs are getting very low and so very dear and though clothes seem as abundant as ever the price of everything is enormous. I went at 1.0 and lunched again with Ell at the Bath Club and we saw afterwards Mrs Pat Campbell in “The 13th Chair” at the Duke of Yorks. Quite one of the most thrilling things I’ve ever seen and I want to go again. After the performance thinking to revive old memories we walked to Princes to tea, ye gods, how are the mighty fallen. Only a small room is reserved for tea and we were given two tiny slips of toast, half a scone, some very small dry bits of bread and butter and ditto cake.
(THE THIRTEENTH CHAIR was produced at The Duke of York’s Theatre, London, on October the 16th,1917, with the following cast of characters:–
ROSCOE CROSBY Mr. Charles Rock
WILLIAM CROSBY Mr. Lionel Belcher
EDWARD WALES Mr. Yorke Stephens
BRADDISH TRENT Mr. Dennis Wyndham
HOWARD STANDISH Mr Vane Sutton-Vane
PHILIP MASON Mr. Arthur Finn
POLLOCK Mr Charles Bishop
INSPECTOR DONOHUE Mr. James Carew
SERGEANT DUNN Mr. Frank Harris
DOOLAN Mr. Denham Charles
HELEN O’NEILL Miss Hilda Bayley
MRS. CROSBY Miss Dorothy Hammon
MARY EASTWOOD Miss Margaret Moffat
HELEN TRENT Miss Ethel Carrington
ELIZABETH ERSKINE Miss Grace Darby
GRACE STANDISH Miss Gladys Maude
MME. ROSALIE LA GRANGE Mrs. Patrick Campbell
The scene throughout the play is the Italian Room in Roscoe Crosby’s
House, New York. The time is evening. The second act takes place ten
minutes later than the first and the third act half an hour later than
the second. Not to be confused with The 13 Chairs, which later became a film starring Sharon Tate).

Jan 27th
Went to St Martin’s in the Fields to church and heard Dr Littleton preach. He spoke very well and held forth on the evils of compromise which he said was a great characteristic of the English nation! The church was crowded, not a fashionable congregation but many men and thinking people. I like this old church and it calls to my mind how when passing it one day with Father as a child and on hearing its name I asked him how they managed to bring it up from the country!