November 14th, Thursday
I have been on duty at Hospital today but by luck got off soon after two. It appears they have had a frantic row up there for on Peace night six of the men went off to a dance at C and didn’t return till after 2.0am. This was reported to the Sister and then there was a real old row which resulted in her shipping 6 straight off to Taunton for detention! There are rumours that it may close altogether before Xmas. Glad as one has been to do our bit it has been a strenuous job and I shall not be sorry to quit.

November 15th
A white frost this morning and a very cold world. The effort of getting out of bed on these occasions is stupendous and cruelty to animals, the early feeding of chickens and rabbits before breakfast is not to my liking at all!

Nov 16th
A still whiter and colder world this morning. The world outside is full of the General Election forthcoming in December. 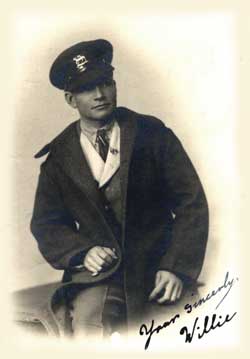 Nov 17th
This nice photograph I got from our faithful William yesterday. He is at present in Manchester having been gassed on the Western Front, but he has had rather a wonderful record having joined up in Sept 1914 since which time he has served on 6 different fronts, ending up with France.
What will tomorrow’s paper bring. Yesterday we read that Revolution was threatening in Holland now, and Switzerland is in the same way. One really feels that England is the only sane place to live nowadays.

Nov 18th
I suppose after such a world conflagration one cannot expect things to be anything approaching normal, but really our continental neighbours are in a fretful state. Germany is making a Republic, revolution now has broken out in Switzerland and Holland, and we see announced that the Royal entry into Brussels has had to be postponed owing to the German soldiers who in spite of the armistice are pillaging and sacking the place. Our army has begun its march into Germany and so at last we shall “wind up the watch on the Rhine”.

Nov 19th
The country is now preparing itself for a General Election and Poggy read me the splendid speeches by LG (Lloyd George) and Bonar Law. The former is certainly a born orator and if he is not re-elected PM the country will be the loser. Asquith’s speech today is vague and unsatisfying, its only merit lies in its length. He leaves his hearers cold.

Nov 20th
Sgt Major and ? came to ferret, but beyond expending 6 cartridges they achieved nothing, but lost the ferret. We had much angry conversation about Hospital, what a rotten show it is. Just as I write, Poggy brings in the ferret, so very glad.

November 21st, Thursday
It has been cold today, I bicycled into Crewkerne to get the week’s margarine etc, armed to the teeth with ration books and couponed in fats, jams etc…the wind was awful and so icy and this afternoon we warmed ourselves by digging hard from lunch till tea.