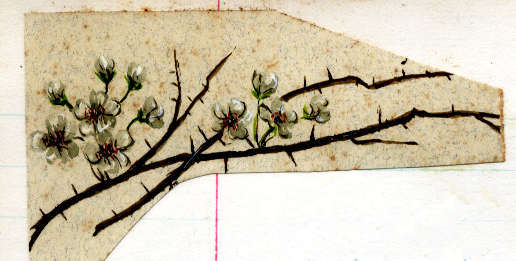 April 12th, Monday
The hedges are full of this blackthorn at present, like drifts of snow and so green are the lanes it might be May. Everywhere bluebells and cowslips are in bloom, the pear blossom is nearly over and the apple coming. We saw our first swallows today when on our way to Newnham where we attended a fearful concert by the Girl Guides, a most painful affair, a sort of kicking the seat “all your fault” affair! I was thankful for its cessation.

April 13th, Tuesday.
We have spent the day in Gloucester, going in by the bus service for the first time. It is most convenient. We went to see the Cathedral because I wanted the children to see the beautiful glass by Wall and Kemp (sic). There we also saw the tomb of KIng Osric, founder of the first edifice and buried there 729, and the curious wooden effigy of Robert of Gloucester, eldest son of William the Conqueror. How wonderful that wood should last so long. I was and always am taken with the painted marble memorial of one John Jones, three times Mayor and Registrar to 8 successive Bishops in the time of the Gunpowder plot.

April 16th
I have left out days as it has been raining and raining and my brain felt mouldy. We have spent the time in various indoor occupations such as basket making, puzzle making, carpentry etc

April 18th, Sunday
Oh! I feel the caveman so strongly in me, the drop of salt in my blood makes me long to fly off to the remote haunts of Earth. I am reading a book of Candless, “The Edge of the World”. I love his way of writing and his immense love of Earth and Nature. It seems to me that there is far more religion in this passionate love of God’s Earth than in a great deal of our conventional church going, so many adherents of which are sadly narrow, peevish and uncharitable. What special merit does one attain by standing up and gabbling the Athanasian Creed, none of which is possible to understand except the general drift and the damnatory clauses which I think are detestable. After tea we went off into the meadows in search of wild flowers. Nootie is busy making a collection of pressed specimens for the Guides and it is a good way of teaching her the names. The “flowering meads” were full of Ladies smock, King Cups, Bluebells, Star of Bethlehem, Cowslips and various smaller fry, but oh, the mud! We plunged and floundered and stuck but what matter, Spring was there and the Earth call sounded loudly in our ears.

April 19th
We’ve actually been to a party today, a real party! What is called a tea dance, given by the MacIvors from 3 to 7. H and I took the two elder children who both rather dreaded it but soon got over that and danced away whilst we played Bridge. Oh, the dancing of these days. It’s not dancing at all, just slack, awkward strolling with rotten music and no swing or go.

April 20th, Tuesday
The most appropriate verse was sent to me today by Mother. The whole world drips it seems. Utterly sick of getting wet feet. I heard this morning that I’ve been elected a member of the B and G Archaeological Society. Joy of joys! 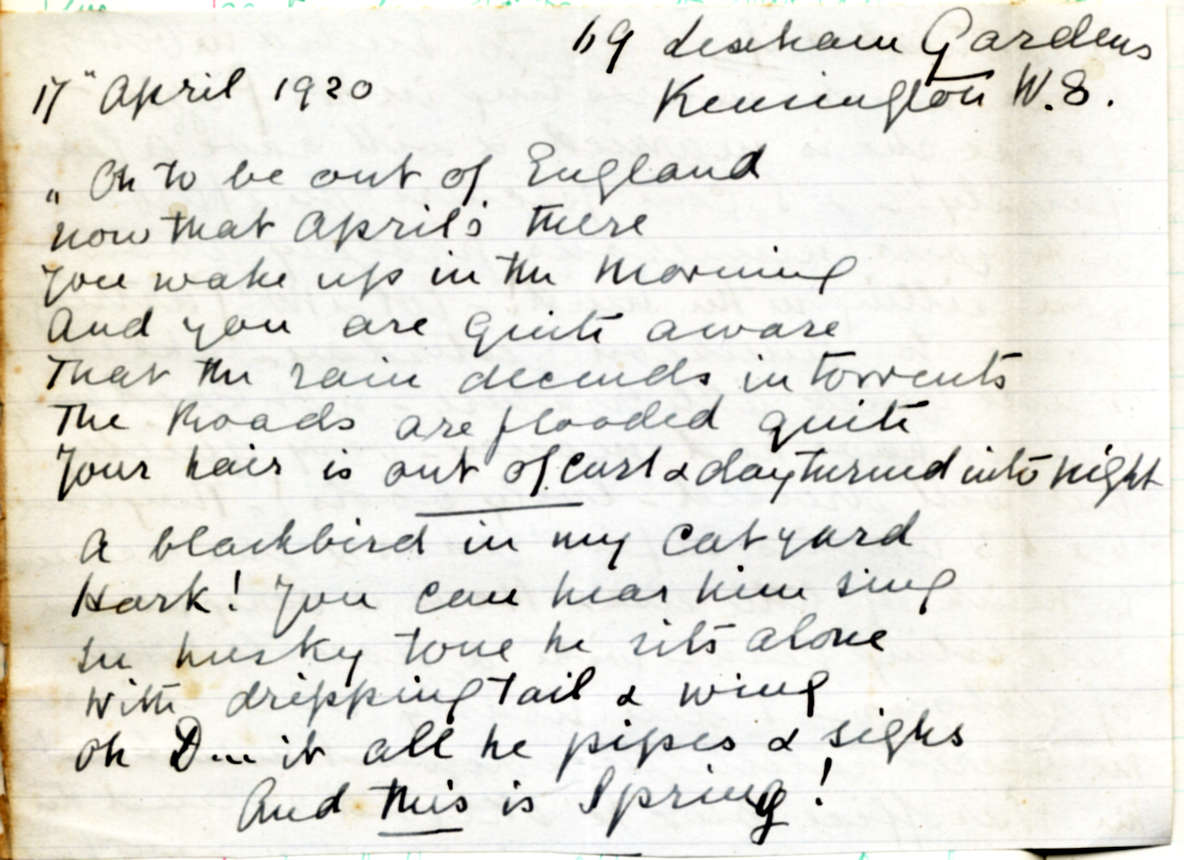 April 21st
An early rise this morning as it was butter making day and I made six and a quarter pounds, so yellow and firm. I sell all I can spare and get 3/6 a lb for it. The Budget is out and increased postage is one of the items. Our letters are to be 2d for 3oz now, PCs a penny halfpenny and parcels 9d. It is rather frantic and one must cease to scratch so much. We’ve seen the sun and so all got to work upon the drive and hoed it all over.

The poem above, transcribed:

Oh to be in England
Now that April’s there
You wake up in the morning
And you are quite aware
That the rain descends in torrents
The roads are flooded quite
Your hair is out of curl and day turned into night.

A blackbird in my courtyard
hark! You can hear him sing
In murky tone he sits alone
With dripping tail and wing.
Oh D*** it all he pipes and sighs
And this is Spring!