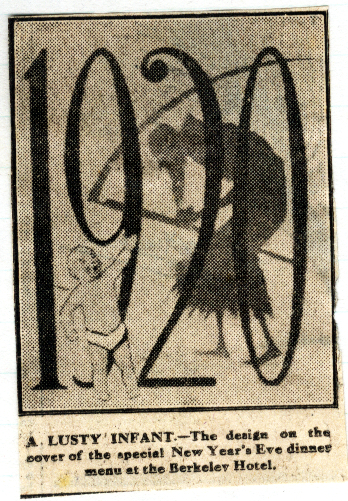 January 1st, Thursday
It is always an interesting thing to begin a new diary and I hope to make a better one this year. Last year I could only get a thin book and in my fear of writing too much I curtailed my days to such an extent that at the end I found I had several pages over. Moreover it was a horrid year and I was greatly uninspired. A year of strikes and fighting, of famine and torture and disappointment with a Peace that has proved no peace. Well I wonder will 1920 prove much better? We personally began it in a very charming way for that kind Chaplain Mr Mitchell took us all over the Tower, an occupation that I always love. We went to his house at 2.30 and there met Blanch Gray and two other kids and personally conducted we saw the dear old place from one end to another. First the Beauchamp Tower whereupon the walls are carved and scored, the sad evidence of many prisoners. Then the Bloody Tower, the scene of the murder of the boy princes, then the Armoury and dungeons, the bogeyish hole where Raleigh was supposed to have been put and the chapel of St John’s, a perfect Norman specimen where all the Kings kept their vigil. At 5 we all adjourned to his house where we had tea after which he took us into St Peters ad Vincula where services are always held and from where after their last communion a host of victims have been led out to the Block close at hand. We inspected the Regalia today which was closed the last time I came on account of the Suffragettes and had all the interesting pieces explained to us by the instructor. The Padre was as cheerful as ever though he is almost blind and deaf. He has been there for 9 years, a strange place to live, full of haunting memories. He told us that about 9 traitors have been shot there since the war, and one man is still imprisoned there awaiting trial.

January 2nd
Our gay time in Town is over and we caught the 10.45 to Newnham, arriving home at about 3. The girls were much interested in going over the new house, rushing here and there. We found Martha established having returned some days ago and all the house fresh and clean and new. No cook have I found in spite of signing 3 Registry offices in Town and so I must go back to my pots and pans alas. Many people are worse off than we for they have no servants at all and are doing all their work or living in hotels.

January 3rd
This afternoon Nootsie and I rode over to Blaisdon to have tea with the MacIvers. They have a vast house and only live in a portion of it owing to a lack of servants. We bundled home in the pitch dark, I with only a front lamp and Nootsie with H’s flash light. Luckily met no policemen. (They were on bicycles).

January 4th, Sunday
We walked over to Kirk this morning, the usual poor little congregation, but it is quite a nice service and worthy of better attendance.

January 5th
Cooked hard all the morning ably aided by the girls. After lunch, though vilely cold, we went out and planted the flowering shrubs given to me by Ell.

January 6th
A most bitterly cold day and last night I really couldn’t sleep for cold. We unpacked books today. All the world is white with frost, very pretty but bitter and I don’t like it!