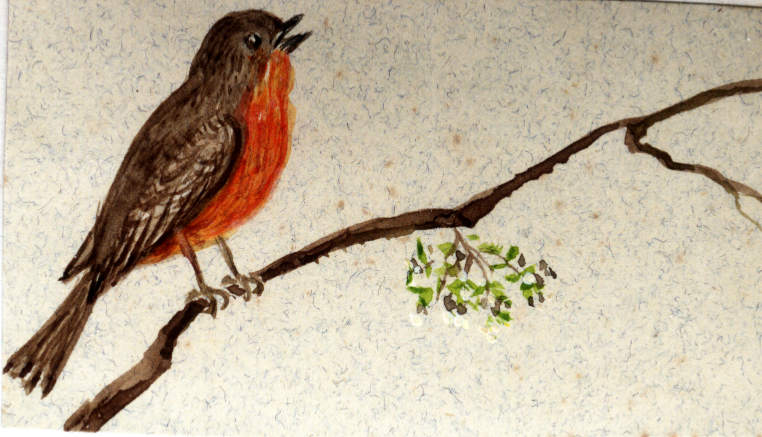 January 7th, Wednesday
Thank goodness its warmer and one can breathe again. Walked along the road past Flaxley and I was fascinated by the country, the road runs past the Abbey along a deep quiet valley with the forest reaching right down on the road. We wandered up into it as the hedges are all open and seem quite uncared for. They say in Spring it is carpeted with flowers including daffodils and I’m longing for April. To tea came a neighbour, Mrs Vaughan-Hughes who lives in Westbury and who has asked us to tea and Bridge tomorrow, including Sir Francis Crawley Boevey who will fetch and carry us in his motor.

January 8th
After a morning’s strenuous chores it is pleasant to spend an afternoon and evening pretending to be a lady. Sir Francis picked us up and took us to the V-H’s. They have a most charming old house, Adsett Court, dating from the Dark Ages.

January 9th
The days are lengthening. It being fine and warm we worked in the garden. Such a joy to feel that the glory of Spring is in front of us.

January 10th, Saturday
A fearful storm of rain and win again, the weather truly is freakish. We employed ourselves in unpacking my cabinet of tiny treasures and were glad to find no breakages, now it can rest easy for the next 10 years with luck! (Not to be).

January 11th
Torrents and deluges, the whole garden a swamp and the fields below a lake. Too wet to go to Kirk and though it cleared after lunch I felt as if this old cook had really earned a rest so had a real lazy afternoon.

January 13th
Cooked a bannock, a cake, little cakes and pastry as well as ordinary food. After lunch Sir Francis came to inspect the house and stayed to tea. I don’t know how far his family dates back but his old Abbey was first built in 1100, added to in 1600 and again in 1700 odd, and there always seems to have been a Sir Francis there.

January 14th
After cooking all morning I fled into the garden after lunch and picked about for half an hour, when I came in and got clean and then walked down to the Abbey. Here is a quotation out of a pamphlet Sir F wrote about it: “From Sir Antony Kingston Flaxley Abbey descended to his two sons Antony and Edmund, and to descendants of theirs until in 1647 a William Kingston sold the property to William Boevey and his half brother James” and so since time far off the place has been theirs. Its origin dates from 1143-54 when it was built by Roger, son of Milo, Earl of Hereford in memory of his father who was killed on the spot by an arrow whilst out hunting”.
It has three distinct periods. It was added to in 1777 when a wing was burnt down, when the Adams period was in vogue, and very beautiful are the mantlepieces etc of this date. In the latter part are many interesting pictures by Reynolds, Holbein and other famous painters, the one of Mrs Boevey being specially interesting as she was a great lady in her day, the originator of the S.P.Q and the Three Choirs Festival. From there we passed into the ancient kitchen, the monks’ Refectory, all in its original condition and beautifully restored by Sir Francis. The old stone arches of the roof in perfect condition and heaps of lovely pewter, brass and copper. Then up a huge oak staircase to the tapestried bedrooms above, formerly monks’ dormitories, to their “spot” room, the Abbots room, a high oak raftered room all restored to its original condition by Sir Francis. One end is covered with such lovely books, all old green, gold and red calf. When this man came into it he found in the lumber room all sorts of lovely things all stuffed away and forgotten, so accordingly much horror was cleared out and the ancients restored to their proper place.