January 23rd, Friday
Much preparation is toward against the cook’s arrival tomorrow! I can hardly realise that I am nearly at the end of my toil. It will be a relief to get out into my beloved garden in the mornings. Today we picked weeds and roots and burnt them and stored parsnips and planted the jasmine. Gradually the garden is getting all trim and neat.

January 24th
The cook, Maggie Webb, is an accomplished fact! She is in the house! she is cooking the dinner!! H busy making bonfires. We have now made four and are burning up such heaps of rubbish and weeds so that soon we shall have none left. Its a splendid clearance. 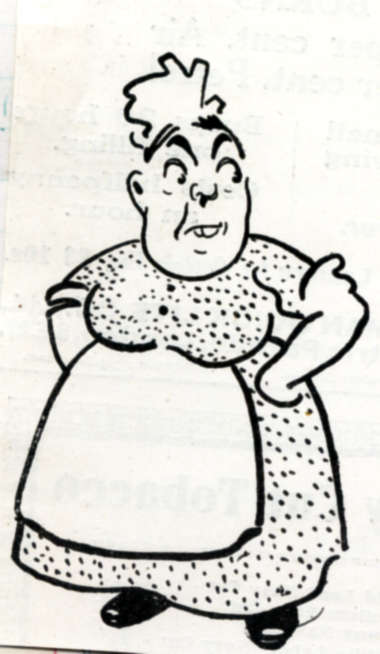 This is not a picture of my new cook but of myself as such for the last four months!

January 25th, Sunday
As we walked to church a thrush sang out in the fields below and after church I walked round the garden and picked violets, jasmine, aubretia and arabis for my first Spring Pie. I rode down to Kirk again after lunch, quite a large congregation came down from over the hills. Where they all live is a mystery to me as hardly a house is in sight but I haven’t explored the country round much yet and shall wait till a little later.

January 26th
We have been in Gloucester all day and it poured with rain. I had letters from Noots and Pink today, all arrived safely. I also heard from Adie who sails at once and so gets out of England in time to escape Income Tax!

January 27th and 28th
Very busy over household chores and have got through a lot of jobs which have had to wait during my cooking days.

January 29th, Thursday
All the hills are covered with snow. I do hope it doesn’t come down here but its very cold. We started on the rockery which we are making under the front windows. The soil is heavy and full of clay. We’ve also cut a narrow border right under the windows which I shall fill with nice smelly things such as tobacco, stock and mignonette.

January 30th
One of those rare and priceless days full of light, air and pale Spring sunshine. After lunch I rode into Newnham and from there took car to answer two calls. Returned at 4 and to tea came the Vaughan Hughes, after which we played Bridge till 7.30.

January 31st
I had a letter from Mother this morning which gave me a shock. She writes that upon Thursday night Lena suddenly died. It appears that she had been unwell and in bed for several days and that night Thurie sleeping in an adjoining room heard the sound of a fall, went in and found her on the floor. He got her back into bed with the assistance of a maid, rushed out for a Dr, who returned and pronounced her dead. Mother has gone down to be with him and will stay till after the funeral. Poor thing, his deafness makes him so helpless. (Having lost his son Herman in 1918, and now his wife, Thurie – Arthur von Poellnitz – is left alone).