June 12th, Saturday
This was the day of the Cotteswold Field Club. It met at Longhope and Sir Francis drove me over, taking me first to the Pringles to lunch where we sat at the famous looking glass dining table, hideous and mad. Proceeded later up over the hills fossil finding etc and returned to the Ps for tea, then to the Abbey where he showed me a lot of lovely treasures.

June 13th
We heard from Frank last night telling us that at last they think they have bought a house near Horsham and are very pleased with the prospect. I do hope their long wanderings are over.

June 15th
My birthday, a thing to be forgotten these days I’m thinking! Still I have no objection to getting lovely gloves such as Mother gave me, hat and cigarettes from H, a lovely little worked cloth and garden tool from Noot, seeds from my other two besides sweets from B and a lovely silver spoon from Frank and Tilda, to my surprise.
Today I got all the wallflowers pricked out, 258 of them, and a lot of other prickings.

June 16th
Violent thurderstorms again. The heat was oppressive and the flies nearly drove us mad as we were mowing all the afternoon. We had just decided to have tea in the garden when down came the rain in buckets.
Early this morning I made my butter and Poggy came to assist because when I go away on Friday he is going to make it. We only have the one cow now (the other was dry) but make about 6 or 7lbs a week and it is so delicious now that I always scald.

June 18th, Friday
Mother and I travelled up today by the morning train and on arrival I left her to go to the stores. The heat was frantic, everyone looking utterly tired out and weary. Found all well at the flat and am enjoying the prospect of a week’s Europe mornings!

June 19th, Saturday
A real joyous day. At 1 I went down to Wellington for Speech Day and was met at the station by my son, dear grown thing with a cracked voice! We walked up to College in a crowd of other parents all dressed out in their best – indeed some mamas must have caused qualms in the hearts of their orthodox British sons. I took care to wear black and white!
We first witnessed the Assault at Arms to the Duke of Connaught who with other big bugs was there. PInk had been chosen for this but got out of it owing to my coming. Next came speeches in the Great hall which lasted till 4.30, then the P.T. exhibition after which tea in the Quad. We got hold of young Tom (Jackson) and had him to tea with us and then repaired to the woods and smoked a cigarette and had a little talk until it was time to go to the station. The train was late thereby nearly making us miss our connection at Reading. I was terrified and ran like a hare and when I got to Paddington having had no lunch or dinner I went and got a sandwich and then straight on to the Opera House to join Mother and party at the box. Tosca was given and was as perfect as ever. Puccini is wonderfully versatile, he can be tragic, gay and sad with equal success. I was quite ready for my bed at 1.0! 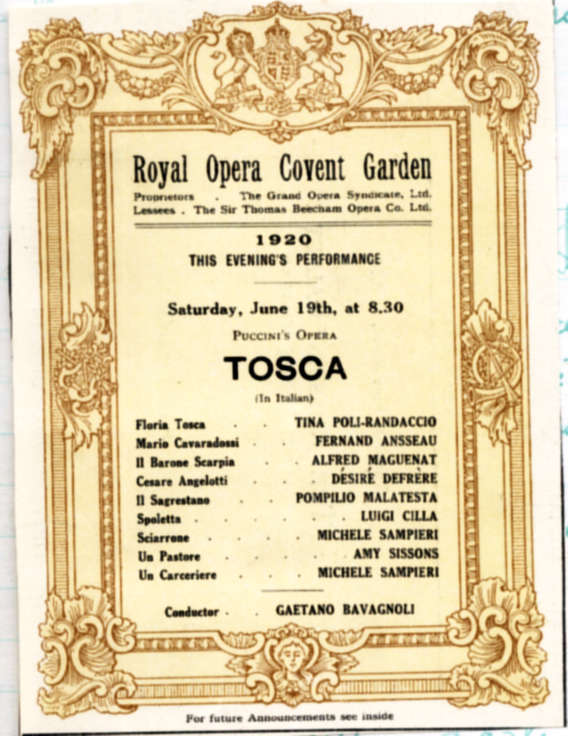 June 20th
To St Martyns (sic) with B (St Martin in the Fields). One always hears sense there and is spared vain repetition. To lunch with Blanche (Gray) at the Club, so very nice and much “do you remember” conversation.