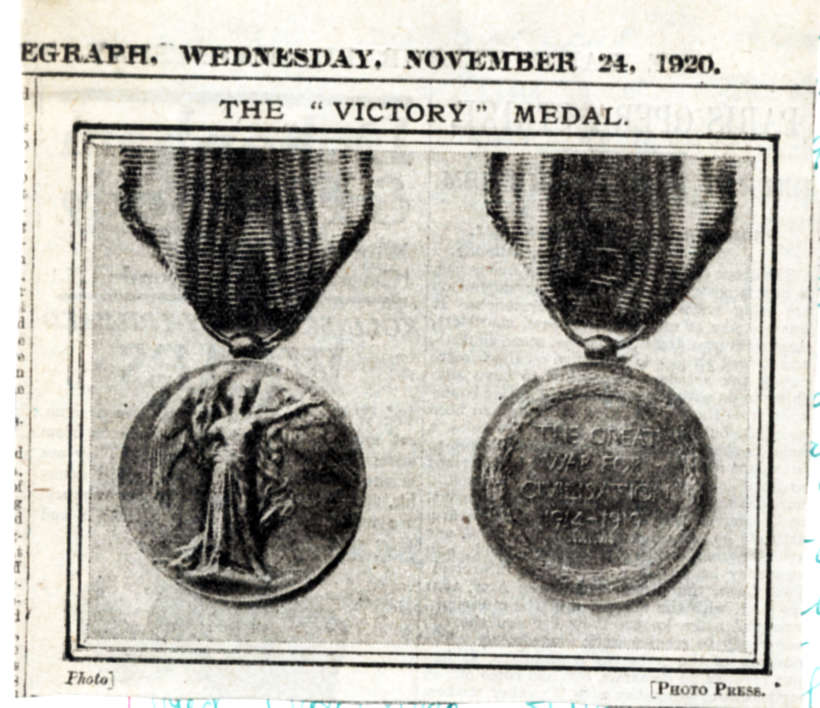 November 25th, Thursday
A day at home. I get so little time for my garden now alas, and long to have one long day grubbing but having to do cooking puts the lid on this. Here is a picture of the Victory Medal which Poggy got two days ago. He also got the War Medal and a “Mention in Despatch Testimonial” which I have put away with my Red Cross one. On mine I should write “for the washing of pots and boiling of Pudding Clothes”!! Strange times they were and only our real love for the men carried one through some of the jobs one had to do.

Nov 26th
So mild I worked out with no coat. Less than a month to Xmas and we hardly know we’ve begun winter. I suppose we’ll get it after Xmas. Today in Town were all our poor victims of the Irish tragedy taken in Procession to the Abbey with Military Honours. There was a great demonstration of sorrow in Dublin actually and I really think the majority were overwhelmed with the horror of it all.

Nov 27th
The paper contains a long description of the sad procession through Town, from Euston to the Abbey via the Cenotaph so once again strangely enough that spot has witnessed another wonderful scene. I had to go down to Westbury today to examine a Guide in toy making. I passed the child for her things were really quite neatly made but being only one it was difficult or rather impossible to make comparisons.

Nov 28th, Sunday
Lots of people in this world find Sunday dull but we look forward eagerly to its quietness and the luxury of spending the afternoon reading and snoozing. Enclosed poem is very apt and fits our case. There is nothing I mind about the whole show except the washing up and that chiefly because it makes ones hands so awful. I am ashamed to let them be seen. 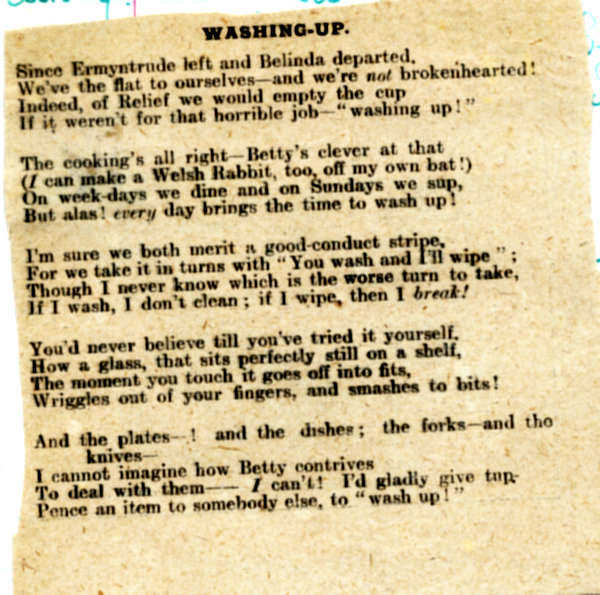 Nov 29th
News comes today that the Sinn Feeners have been successful in frantic fires at Liverpool. They say several hundred thousand pounds worth of damage in the cotton warehouses and timber yards of the docks. Great plots were recently discovered in time thank God for destroying the power station at Manchester but really if they are going to bring their devils’ tricks over here it is becoming a bit thick.
We’ve been having a Bridge party this afternoon. I had out my very best china out of which they sipped rich china tea and stuffed bannocks and cakes all made by me. What price tummy aches!

Nov 30th, Tuesday
More frantic news from Ireland, this time a patrol of 16 Auxiliary forces have been ambushed in a lonely neighbourhood near Cork and all shot dead. They were all ex officers. Where is it to cease. This makes a total of 170 this year, it’s simply frightful, also burning of houses in Cork and whenever the fire brigade attempted to put it out they were fired at and ordered home. We have been all day over at Mrs Wilkinson at St Briands. She has the sweetest little ancient house overlooking the Wye valley, all so quaint and old world. The house is said to be built on Roman foundations.