August 1st, Monday
Bank Holiday and I believe the rush to the sea this year to be quite unprecedented. Quite recently the Cornish Express started to run again and the train left London with the engine decked out in wreaths amid cheering crowds and at its first stop, Plymouth, people threw buns and drinks into its boiler and one set of boys went so far as to empty a barrel of cider into it!! We all went to the Abbey where they had an elite party of tennis and Bridge players. I hate spending hours on a summer day playing Bridge but it has to be done at times!

August 2nd
A large family and a completely full household though my bed in there is empty as I always now sleep in the shelter. We sit in it a great deal impervious to all weathers and its what I’ve wanted for years.

Aug 4th, Thursday
Today the Westbury Flower Show took place and on and off at intervals the rain descended. Bad luck after these months of fine weather. We went in for butter, vegetables, fruit, sweet peas, pot plants and tomatoes. Got 1st for butter, pot plants, sweet peas and fruit besides 2 seconds and 3 thirds so were very bucked. I was especially over the butter as we had several old hands against us. We had to stay until the bitter end as H was judging at the Sports, a most boring occupation, and it was so cold. I was much amused at three “bookies” in attendance. It looked quite professional and they did business even over the sack races!!

Aug 5th
Hilda left us this evening to cross by the night to Ireland. Ireland is in such an awful state I should hate a girl going about by herself but she had done the journey often. At present there is a truce whilst De Valera confers with LG and that perhaps may tend to make matters easier. (A wire on the 6th confirmed her safe arrival).

Aug 9th, Tuesday
I went off on one of my vile expeditions to Cheltenham. Nootie came with me as when we returned to Glos we went and interviewed the lady with whom she will live for the Domestic Science course. Seemed quite nice, an ex-army Chaplain’s wife. We didn’t get back until 6.30 and were ladened like camels having all the cakes with us for the Club tea which is to be here tomorrow.

Aug 10th
After all our preparations it has poured the livelong day and no one turned up at all. I was thankful it was so as they couldn’t have played and goodness knows what we should have done with them all. A letter from Eve telling us the news that Duncan Rowley’s regt. is ordered to Cologne so Win is to be married in October and go straight to Cologne. I feel sorry for Eve losing her so soon and having this hurried wedding.

Aug 11th, Thursday
We had a most cheery party today and a lovely fine day too. The Wemyss and the VHs came and after tea we played Bull with great competition. They are all so nice and friendly and really one does appreciate being taken into their circle as they have taken us. 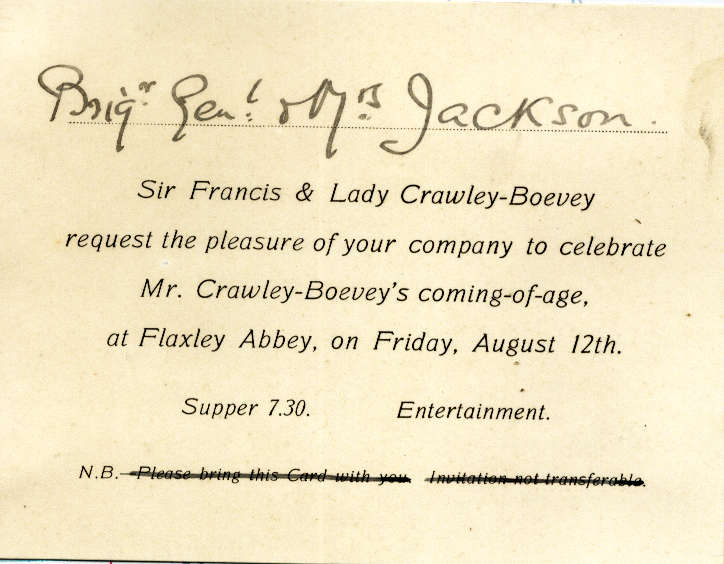 August 12th, Friday
To this most interesting event we were bidden this day and at 7.30 H and I turned up being picked up on the way by the VHs. In the grounds they had pitched a huge tent where supper was laid for 200 and as we arrived Sir Francis and his “come of age” son were receiving all the guests with Lady CB a little behind. A most excellent supper was served, the tables placed in rows and at the end a cross one at which we sat, I at Sir Francis’ on one side and Mrs Mc N on the other, the two ladies of Flaxley! On my other side Charles Clark as ancient and chief retainer and next him the hero of the evening. At the end of supper he (Lance Crawley-Boevey) rose and proposed the King’s health, Mr McN followed with “his” health and a speech, then the presentation of an illuminated address and a gun from all the tenants, Lance CB gave his thanks, the band playing “for he’s a jolly good fellow” and Poggy made his speech proposing the parents’ health and Sir F concluded with a charming speech in which he said all that was nice. It was a remarkable gathering and nearly everyone was there from Isaiah Young the oldest tenant who presented the gun to long clothes babies. The whole feeling was delightful and one couldn’t imagine in such a community that bolshevism existed in the world. One odd old character said to me “you see Ma’am they’re our Royal family” and so indeed it is. Supper and speeches over we danced on the green, I and Lance CB leading off! and then a conjuror entertained us till long past 11.0 and so ended an evening at which I really loved being present.