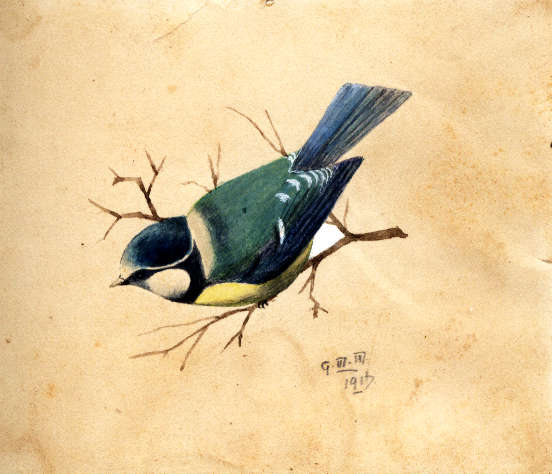 Aug 17th, Wed
I have left out several days for we have done nothing except yesterday when we went over to the Birchalls for a tennis party. It was a big affair and very nicely done and they are awfully nice people.

Aug 18th
Today Mother left us and we all miss her. I went up the hill after tea to see my sick girl and found her with her mother and an aunt, and brighter than last time but she has dropsy and I fear there is no doubt that the end must come soon.

Aug 21st, Sunday
I have got a vile cold and didn’t go to church but lay in the shelter and read the Observer. It is of course full of Ireland and the present crisis with the Sinn Feiners. De Valera has returned with the offers of LG and they have virtually refused it. The world at large says he could not have gone further and even comments that he has gone too far for Britain’s safety but these extraordinary people don’t seem inclined to accept anything and this coming week will decide the issue. (Here, at a later date, Wynne has cut out the bottom of the page).

Aug 22nd
Churning morning so at 5.20 I arose from my rural couch and walked into the house, so dark I had to have a light to dress with. I called Poggy with tea at 6 and then fed the chickens and started to churn. By 7.15 the butter had come so by breakfast it was all done. For breakfast this morning we had mushrooms and buttered eggs on toast sprinkled with green chillies, very potent!

Aug 23rd
A busy day in Gloucester. I had to take Babs to the dentist to have a tooth out with gas. All went well and he did the job awfully neatly and so quickly with no fuss.

Aug 24th, Wed
I got Mrs James to cook for me today and went gardening instead. We picked damsons for jam, also mulberries for sale and some for jam.

Aug 27th, Saturday
The last two days have passed without incident but today the family have all been off on various errands. H took the girls to the Cheltenham sport, Pink went to a dance and I went down to the Abbey to watch a tennis tournament. I was decked out in a new costume, a puttie gabardine coat frock and coat trimmed with old chinese embroidery presented to me by Mother and I felt very prawkish!!

Aug 29th, Monday
We went for our first blackberrying picnic this afternoon and got 33 lbs which I shall make into jelly. When we set out it was lovely but a fine mist came down which rapidly increased and we had to walk home in torrents, arriving like draggled rats.

Aug 31st, Wednesday
Again we went off blackberrying, bringing home 30 lbs. It was lovely up there in the fields and the fruit is lovely this year. We all had tea up there. It seems hard to realize in this peaceful spot what a wretched state many countries are still in. The state of Russia is appalling as they are in the throes of the most awful famine. Enormous efforts are being made to relieve the state of affairs but as they have practically no railways there is no possibility of getting the food about. The enclosed cutting will show what a pass they have come to.