Dec 26th
The day began cold and foggy but at midday down came the rain so we ensconced ourselves and wrote thank you letters but how we managed it I don’t know with such a bedlam. The children shrieked and jabbered, threw paper and orange pips about and Pinkie finally insisted on putting the tea cosy on his head and writing in that. The wind is howling round the house but all is very cosy in here.

Dec 27th
We are having such gales and dark weather. I awoke in pitch darkness and looked at the clock, seeing as I thought 6.30 but on coming down saw that it was only 6! However there was plenty to do. This afternoon the girls and I went round leaving the MU calendars. The roads are awful and Noots came an awful smash off her bicycle cutting both knees. We did all the Elton ones and outlying houses of Flaxley. It takes a long time as each one want a chat, one old thing being very plaintive over her “diaspepsia”.

Dec 28th, Wednesday
A raging night and so inky dark even up to 10. After lunch I set forth with Babs as Noots knees were too stiff. We took Popes Hill and finished all but two. The gale was tremendous and we simply could hardly stand and the mud, clambering up and down the tiny lanes and steep hills, was so slippery one really wanted a tea tray! Each one so courteously asks us in, and on enquiry for health each had a different tale to tell. One woman said that her husband had been suffering from double pneumonia, pleurisy and the bronchial asthma all together! He was coughing in the lane as we went along and it sounded as though they were killing a pig! These people live in a remote hollow of Popes Hill, very sweet in summer but having no roads at all it must be fearful in winter. There is one curious case on Popes Hill of a child of just 2 years, its mother was talking about it today to me. It is for ever escaping through the thorn hedge head first, it smashes all the windows either with its head or hands, uses the most fearful language not in anger particularly but in ordinary play and cares for nothing. It will be curious to see the future of such a phenomenal case, either he will be a lunatic or something extra special.

Dec 29th, Thursday
Took Babs to a party , a dance really, held in the Council Schools. It was perishingly cold and I for my sins had to play Bridge. It sounds and was like a bad dream.

Dec 30th, Friday
I feel so stupid having caught a chill yesterday and tomorrow being our String Hunt I had to go into Glos to provide for it, a horrible day, dark and windy and vile. Pink and Noots came in too and we toiled about all day returning by the 4.30. When we stepped out of the bus in inky darkness we were met by torrents of rain and the full force of the gale. The walk home was awful and I, having a touch of fever, just felt as though bed were the only place on earth worth going to.

Dec 31st, Saturday.
The last day of a very unpleasant and disastrous year as far as national affairs are concerned but in the home thank the good Lord there has been peace , the weather has been too wonderful, Pink has been with us all summer and all that has happened to us personally has been delightful. But oh! the strife, famines, Bolshevism throughout the world has I should think been unprecedented. Towards the close of this miserable year there came the success of the Washington Congress and the Settlement of the Irish Question. Whether results will show if these two affairs are more than skin deep time will tell. Things do look a bit better.
At 3 our young guests arrived and were appalled by the prospect of unravelling the maze of string we had arranged for them but in less than half an hour they had all secured their parcels and we set to play all sorts of games, Put and Take, Pilladex, Snatch Cork, Up Jenkins and Pot Luck, with an interval for tea.
We had a joyous New Year’s dinner of a roast pheasant which Pink “found” in our fields! and then played cards till 12.0 when as usual we followed the rites and turned in like sleepy owls at about 12.30. So ends my writing in this fat book. Goodbye 1921. Few will regret your passing. 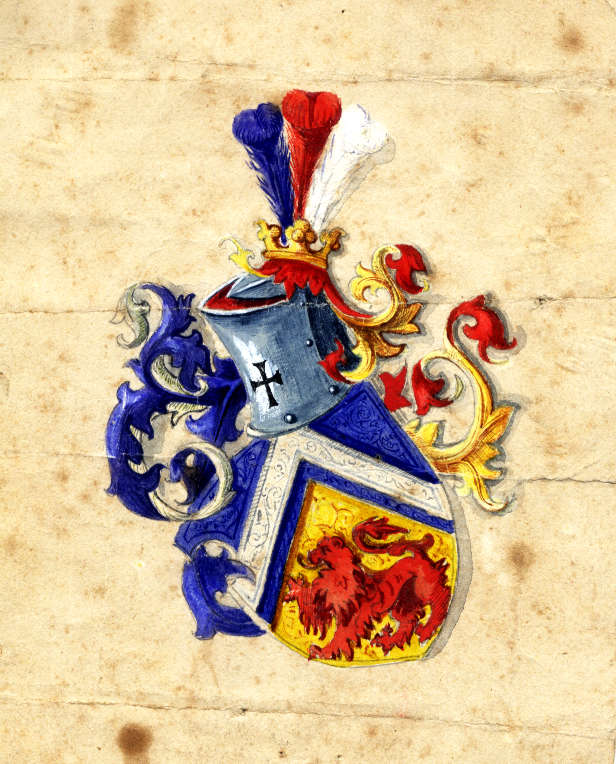 (Done by Walter von Poellnitz, aged 12.  Wynne had this added to the front of December, alongside his frontispiece for her done when he was 78.  She had found this in Thurie’s portfolio alongside the other early drawings and the material from Herman).