July 11th, Monday
This is the week when the Bristol and Gloucester Archaeological Society meets the London Institute. I have decided to do 3 days with them and came into G this morning. We assembled in the Chapter House where the Dean harangued us and afterwards went round in conducted parties.
I am staying at the Wellington and the only room I could get was in the roof where the heat is terrific. At 8pm I sallied forth to a reception given by the Mayor and Mayoress at the Guildhall where firstly we took refreshments and then adjourned to the Assembly rooms for speeches. 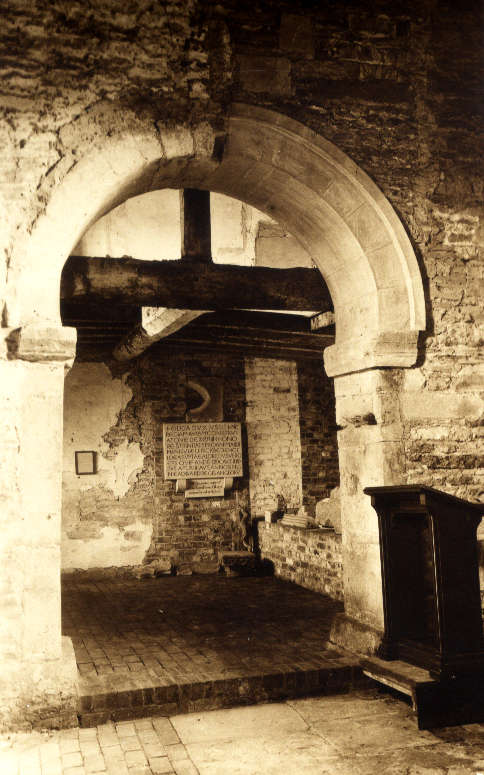 July 12th
I was glad to escape from this horrid little hotel and at 9.20 we all set forth in 4 charabancs to Deershurst. This is partly a Saxon church, the date being unknown and nearby is an old black and white Elizabethan house known as Abbots Court and joined on to it is the chapel discovered in 1885 and identified with the “regia aula” built by the Saxon Odda in 1056.
At 12.30 we drove to Tewkesbury where we had a sumptuous lunch and tea given to us by 2 members and oh! how one appreciated both! I am in love with the Abbey. It is perfect, so ancient and original. It was founded by Robert Fitz Hamon in 1102 but a Saxon monastery existed here in the 8th century. The monuments are particularly fine, the latest being the Wakeman cenotaph of 1450. This was the last Abbot of T and the first Bishop of Glos and was made during his lifetime. It represents a body in an advanced state of decomposition with a worm, snail, snake and mouse gnawing at its flesh! Came home with the Cliffords and so caught the 6.30 home.

July 13th, Wed
Another day of tropical heat. I joined the party at Flaxley today, familiar ground, and from there we drove to the centre of the forest to see the Roman road. It is wonderful that there are the very stones laid here by the Romans themselves and in such a good state of repair. We lunched at the Speech House. It was a most horrible fiasco. Nothing was ready and the food simply filthy as was the place. St Briavels was our next place. Some say it was built about 1131 but Mr Baddely thinks it is much older and that in Roman times there was a temple there. It is even now in wonderful state of repair and belongs to the Crown and is inhabited by a Mrs Campbell. Time pressed and we hurried on to some ancient iron workings called “The Scowler” near Lydney. These old caves and pits are grown over and I cannot imagine a more suitable residence for the witch Gorgonzola and her consort Wizard Gruyere. I was dropped at our corner, and wish I were able to do the whole week but it is too expensive a game and so I must be content with three days.

July 20th, Wednesday
I have left out a week. The heat has been too great to write dairies. Things are getting serious for the country. The land is brown and our garden is nothing but an ash heap. All our vegetables are burnt up and the prospect for winter is appalling.

July 21st
I had all the Mothers Meeting women up to tea today. We were about 20. Letty brought Maggie up who is down here with her babies and I was so very pleased to see them. We all had tea on the lawn after which they played futile games for prizes. It reminded me of the many teas we’ve given in former days.