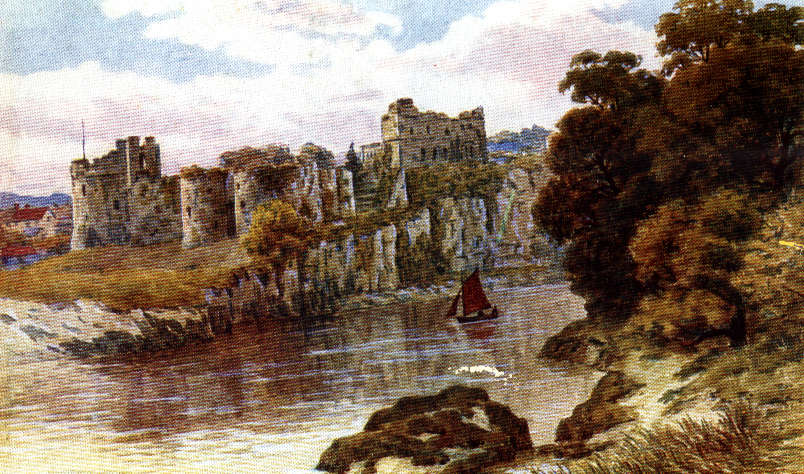 June 1st, Wednesday
Here is the month of months and much bustle and preparation for departure. Martha left at 9 excited and childish, H at 11 by motor and then we set forth at 2 carrying our worldly goods and took train as far as Lydney. We then rode to Cheptstow, a distance of nine miles, stopping to have tea in a field. The spirit of adventure was upon us and the weather lovely. Arrive at L we searched for rooms coming to earth eventually at a very dirty commercial hotel, albeit the largest in town. I’m sure our rooms were full of fleas and the floors indescribable. We took our supper out and inspected the castle. The family of Beaufort owned it and recently sold it to one Lysaght, a nouveau riche who however keeps it in excellent order. The town is picturesque, narrow winding streets and quaint old houses, and the church has an ancient tower but the churchyard is horribly neglected and all the village children use it as their playground playing hopscotch and marbles all among the tombstones.

June 2nd
After paying our bill of 18/6 at this dirty dog hole we proceeded on our way to Tintern. The road was lovely and on the way came upon Moss Cottage, the oddest little thatched stone house, one end being actually lined with moss, this also having been used throughout instead of mortar! We stopped here as we wanted to climb the Windcliff and passing through the cottage we climbed to the top from where we got a perfect view. They say you can see 8 counties from there.
We reached Tintern at about 4 coming in view of the famous old Abbey as we descended the hill. I’m afraid I was rather disappointed in it. It is very wisely being repaired by Govt and in consequence every bit of ivy has been removed and it is a mass of scaffolding, the entire being almost filled with its host of motor charabancs, ordinary motors and coaches. One feels that its ancient peace is suffering from a stomach ache! We had difficulty in finding rooms but at length were successful in a tiny cottage with the nicest old woman who was beautifully clean and where we were very comfortable and slept on feather beds like tops. 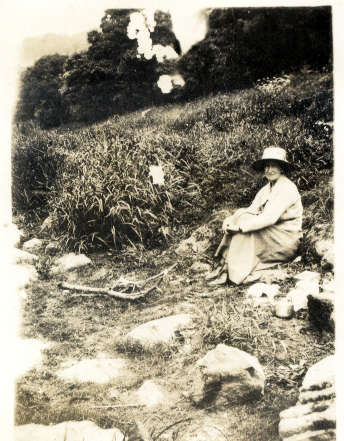 June 3rd, Friday
All along the valley of the Wye we rode today stopping at 1 to lunch by the river there. We watched the salmon leaping whilst we dangled our feet in the water. On arriving at Monmouth our hunt for rooms resulted in the Vine Tree Inn, a tiny ancient pub kept by an old soldier who when I asked him what he would charge for bed and breakfast said he thought 4/- a head would be fair! It was the quaintest and most ancient house I’ve ever seen but clean and very comfortable. Its a nice old town with the usual castle, and the church, a fine modern affair is apparently very High for I noticed a smell of incense and millions of candles and the Reservation of the Host.

June 4th
From Monmouth we rode to Raglan intending to stay but it was quite close so we pushed on to Usk. The castle (at Raglan) was wonderful and is in the Decorated style. For a ruin it is in a wonderful state of repairs and one can almost picture its early scenes. The last time it had any history was when the 2nd Marquis of Worcester aged 80 defended it against Fairfax and when he had at length to give in Cromwell had the beautiful place dismantled. We arrived at Usk at 3.30 and found rooms at the Cross Keys.

June 5th,
Still the weather keeps lovely and today having no suitable clothes so much does our particular branch of religion bind us we could not go to Kirk, so went to the castle, a much ruined affair, and sat and had our church there. Two of our kings were born in that place, Edward 4 and Richard 3 but it is a sad wreck. We took lunch and tea away to the river and spent a lovely time there, very remote and still. Pinkie bathed and I paddled. Our Inn is a very old house and I have a large low room with a carved ceiling and two huge double beds. We do not push on until tomorrow and I’d like to take the bed with me!