June 6th, Monday
Today we rode to Abergavenny and being mad on castles we went by way of Clythra Castle only to find it inhabited and therefore unseeable. Arriving at Abergavenny we put up at the Greyhound, a large commercial affair where I had someone else’s pillowslip and not over clean altogether. It is a very crowded little town where nothing in particular was to be seen the castle being locked up owing to recent accommodation of troops. We took our tea and supper out by the river, the weather being still kind, and watched an unsuccessful fisherman. 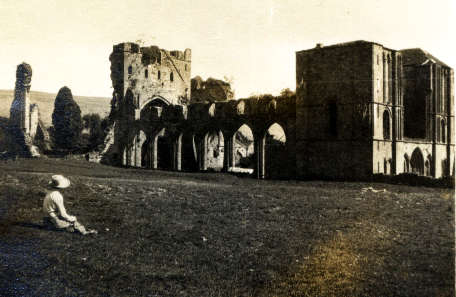 June 7th, Tuesday
Today and this night we were most adventurous for we went away in the wilds and slept out! Leaving A we followed the main road for about 4 miles and then turned off to the rough uphill track to Llanthony Abbey for 6 miles. We walked up hill and the heat was blazing as we were shut in on both side by the high hills. Halfway up we stopped at a little pub and had a most refreshing glass of beer and then proceeded a bit further and stayed for lunch. At long last we got to Llanthony and there found a few cottages and the ancient ruins of a long passed Cistercian Abbey built of red sandstone. The legend is that St David, struck by the suitability of the surroundings for meditation, became a hermit there. We enquired at the little inn but they were full up so there was nothing for it but bedding out. Being a very hot night we selected a “sylvan glade” close to the river. We teaed and supped there and making a large bed of bracken we donned extra clothes and lay down. Never again will I envy the tramp his rural habits at night. First of all it grew very damp, then colder and colder. The ground, which seemed covered with boils and blains, dug into every position of our bodies. Pink had a pillow of his boots wrapped in newspaper and mine was a bundle of very hard clothes. Sleep refused to arrive. Hour after hour I watched the beastly stars and we both got more and more freezing. At last at 4.30 I sat up and said I had had enough. We agreed it was an awful experience and nearly died with laughing. I made breakfast of tea, boiled eggs, potted meat and then packed up and soon after 5.30 we were on the road. “Never again” is our motto! 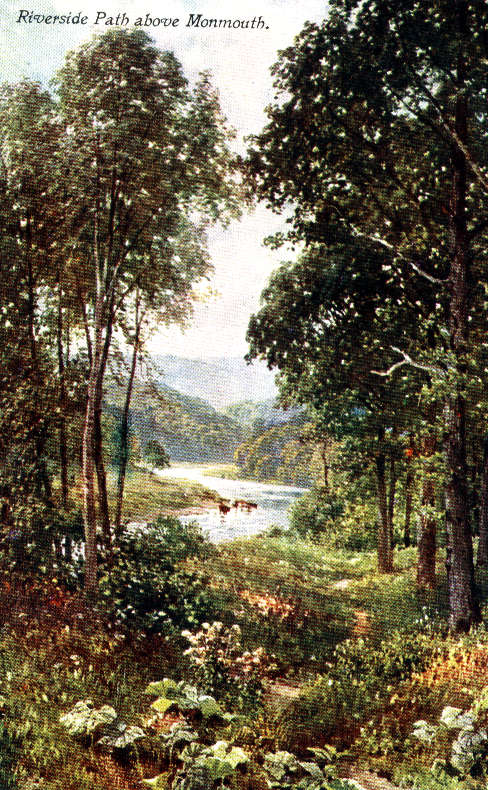 June 8th, Wed
We ran down the valley and took the track to Grossmont. It was a stiff climb. At 8.30 we felt like food and called at one or two farms for milk but could find no one up before about 9! We procured a pint and sat down in a field and brewed ourselves a cup of chocolate. At length the road began to descend and we found ourselves in Grossmont where we got lodgings at a cottage with a widow woman. We deposited our belongings and went to inspect the church and castle. The castle is a ruin and the church shows signs of a much larger congregation, a most interesting and ancient affair and very well restored. We felt rather dead after our long ride and sleepless night so just lay about and went to bed early.

June 9th
Today we had an 18 miles ride over more fearful roads, feet of dust lay over all and it was uphill nearly all the way. We stopped halfway and had lunch and rode on to Goodrich. This we much enjoyed. It is beautiful and full of past history. A nice intelligent woman showed us round, boiled a kettle for us and we had tea, then dropping down to Symonds Yat afterwards where we got rooms again at a cottage with a very nice family called Gardiner for 5/- a head, bed breakfast and supper. It is a ripping place, a deep cleft between high wooded hills and huge limestone cliffs and the river is full of rapids and deep pools which swarm with salmon. I’d like to spend a week or two here.

June 10th to June 12th – Friday to Sunday evening
These have been three lovely peaceful days. Long days on the hills and on the river, reading, lazing, bug hunting and eating. Early to bed and, late to rise and 12 hours in which to do nothing. One day we took a boat and were rowed down to the salmon pool, a great deep silent place where the salmon leap in the air, one actually jumping into one of the boats that day. One day we took lunch up the hills and saw the wonderful view from the Yat, then walked all along the ridge and had tea by the river. Alas we had to leave this morning for Ross