My dear darling
Here we are and it is Sunday morning and a lovely day. I have had my window open till now and put off the heating. The air is brisk and dry and I am feeling very well. In spite of two nights in the train and many stairs to go up and down and the very stuffy train and no sleeping carriages my knees certainly feel quit rested and better than when I wake up at home. Having had my breakfast in bed I am sitting by my table having just roused Thurie as it is 11 o’clock and time for the man who never sleeps to rouse out of his stupor.
Now I must tell you all about my visit to Walter which was a great success. Poor old boy he was quite overcome and his Mädchen fluttered around like a blowsy ministering angel. Walter was looking much better than I anticipated – when first we arrived he breathed rather asthmatically but later on breathed much better. On my way to him I tried to get him a dressing gown in one of the principle shops – nothing to be got so I gave him £1 to get one. My Xmas present. Poor old thing, he nearly wept. His rooms are very nice and most comfortable but of course money is very scarce. He gives his Mädchen 300 Mark to a month and she must feed herself – she looks bursting!! Well I must tell you I looked in a shop on my way to him and got I large sausage, 30 small, a quarter of cooked goose, 3lbs of cold veal, Italian salad, 1lb of markford (?), more sausages for frying, a large uncooked chicken, 2 tins of fruits, I bottle Kirsch, and I had 1lb of tea for him! 380 Mark! The pound is, I don’t know, I think 1400 Mark!!
You can fancy the shrieks of the Mädchen – she was delighted with her crossover stockings and the stuff for a dress. Well we had a lovely meal and beer and excellent coffee and cognac. I had a long talk with Walter about the War! Most peaceful and amiable. I told him about the letter and he said he really had no recollection of it! That everyone was in such a state of excitement at that time and all our nerves on edge and that he had been an ass and a fool!
I told him also about Ruprecht’s letter about making us prisoners and he said yes, that was quite true and reprehensible but that he was a good, useful man etc – no answer from me. He said we none of us talk about the war here now and I for my part try and forget it, the present misery of the country is overwhelming, the lower orders are in power, the whole thing is “eine sauerei” (downright disgrace). He talked very well and said “I talk to you as a German to a German”! and give you my word of honour what I say is the truth!. I said nothing and do believe it was the truth – from his point of view! Well I am very glad that the entente cordial is once again established between us. He is a poor old very much chastened old Teüfel – he does seem so lonely. When I think how blessed I am with all my many dear ones that make life worth living and full of interests it makes me feel rather choky!
We came here by the 6.54 train and arrived at 9.54, had some dinner and half a bottle of wine and then I unpacked a little with Yvonne and so to a very comfortable bed and slept till 9.30! Thurie till I roused him. We have very good rooms, double windows and radiators. I have put mine off and am quite warm. Just been in to see Thurie finish his breakfast and had a cigarette with him – now he is shaving and bathing and then I shall. The meals are served at any time, lunch till two o’clock. All separate tables – Thurie is in a state of bliss! I can get 1 horse carriages whenever I like and shall go and explore often. My travelling chair was the greatest comfort, in fact I would not have got here without it. The people at the Customs were most polite, opened only one of our trunks each. Unfortunately mine was stuffed with tea and cigarettes but they had no luck, poor ones! and I chaffed them the whole time, “go on you will be sure to find something” so they quickly shut it up and scraped and bowed and laughed. One of them escorted me chair and all till nearly to the hotel, making jokes! Little he knew the villain he was escorting.
I enclose a few stamps I have just found. Will you send on enclosed to Grace. I feel a millionaire here and shall have to learn the value of what one gets for Krone. I told Yvonne to get me 50 Mark of stamps and they sent me a heap of stamps and notes for 500 Krone! Well darling that is al for today. Food very good and all well. Much love to you all dear ones. I shall miss you all awfully but am sure this place is the right one for me, dry and bracing.
Your devoted Mother. 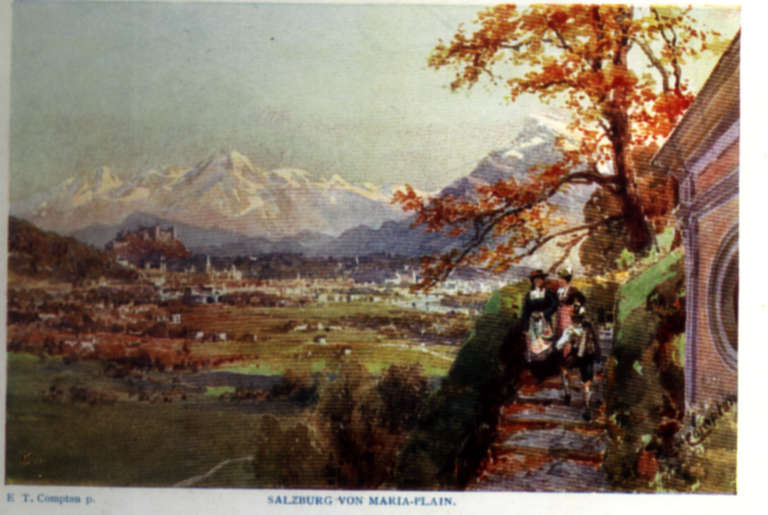