September 15th, Thursday
Torrents of rain fell last night so I had to sleep in. I hate it. One feels so puggy and stuffy after being accustomed to the open air. 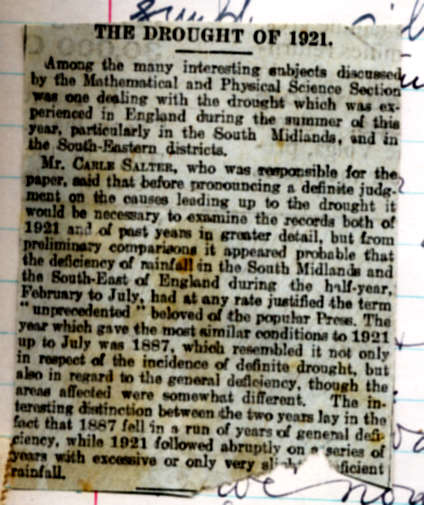 Sept 17th
This cutting may be of interest in future years. Certainly I can never remember such a time for although we have had rain it counts for nothing and the ground is as dry as anything. Our drinking water is still absent and we now boil everything instead of carrying it from Peglars. As their well is very low we don’t feel justified in taking any more from them.

Sept 19th, Monday
Nootsie came home from her visits. She seems to have had a ripping time both at Romney and in Town where Mother took her to two theatres. I am working like a fiend to get her clothes ready for Gloucester.

Sept 20th
I took the two to a dance tonight the Severn Tennis Club gave. This dance is a milestone in my life!! for it is the first I’ve ever been to as a real chaperone. How strange and odd it felt sitting playing Bridge.

Sept 21st
Today my Nootsie went off on her new venture, H taking her in as I was occupied in packing for Babs and getting her trunk ready.

Sept 22nd
I went off to Malvern with Babs as she is moving to Middle School this term. On arrival we went straight to Gold Hill where I dropped my bag and then on to Summerside where she is sleeping in a room with seven others and then she came and dined with me after which I had to take my mouse back and say goodbye, hateful and vile.

Sept 26th
Pink and I walked up the hill to see my sick girl, poor thing she is very bad now. Dropsy has set in all over her. It was lovely up there, so still and warm, and a touch of autumn colouring coming into the trees already.

Sept 29th, Thursday
Pink and I took our tea away to the big hill beyond Elton. It is marked “camp” on the map and is 605 feet above sea level but beyond one ring with a fosse I saw no signs of camp and I know that if I had been a Briton in the ancient days I could easily have stormed and taken it alone! The view from there was wonderful, far over the Severn valley with the river twisting like the coils of a huge snake.

Sept 30th, Friday
It has been a very perfect month this year. Summer seems unwilling to go, for each day is quite warm. I heard from Eve that instead of Duncan’s regiment going to Cologne they have now been ordered to Egypt. It is a blow as the former would have been so cheap to live in which is far from being the case with Egypt.