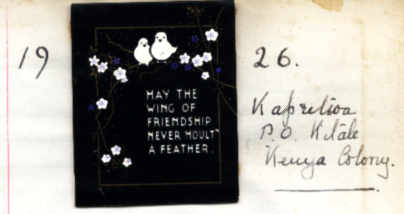 January 1st, Friday
Last night we danced the New Year in at a Fancy Dress Dance at the Club. It was a very good show and many most clever dresses. We danced till daylight and as we drove home the sun rose. I did not go to bed at all but just changed and began the days labour. Opposite I place my favourite saying (which you can see in the first panel).

Jan 2nd
Today my store had its turn redongering (applying fresh mud to walls and floor). We turned it completely out finding rats and their nests, spiders, dust etc besides various treasures I had forgotten. We are in for a quiet weekend I hope, we’ve been on the razzle so much of late that I’m glad to get the chance of being quiet.

Jan 3rd, Sunday
Babs and I have just returned from a ramble up the hill. We sat awhile and through the stillness of the evening came sounds which might well have come on an English hillside: children playing and laughing; the tinkle of n’gombi bells; and the sound of cocks crowing. We ended our walk by coming down through the orchard and eating teparees.

Jan 4th
Labour is now deep in dongering which goes steadily on every day so that we are beginning to look quite smart, but our mud is so un-adhesive that I fear it will all come off again.

Jan 5th
Indian mail came in today with letter from Ell and Eve and Yso. All well.

Jan 6th, Wednesday
I struggle with the art of rivetting, which I am trying to teach myself. I succeeded after much effort in mending a dish cover.

Jan 10th, Sunday
Today a day of leisure and I began by reading in bed, and my literature was the English Review. Amongst other articles I read one by Mitchell Hedges FRGS  called “The Need for Men” and therein he sets forth the present degeneration of the manhood of England consequent upon their worship of women and the ever increasing domination of that sex. A great deal of what he says is true but though he declares it shows itself in conditions such as communism etc one cannot think that these conditions are really present except in a very small minority. The beginning and end of it all is this “worship of women” but to my idea there is a good deal less of this than in former years. I know in my young days we received a good deal more chivalry and “worship” than the present day. There is much in all the papers about the downward track of the Empire. The same thing was said in the summer of 1914, to be disproved in the following years. He works himself up into a fine old rage about it all!

Jan 12th
Calling to remembrance that my Bible box containing old letters had got badly broken on the way out I thought it wise to see if the rats were playing with the contents. I found to my sorrow that they had and had eaten some of H’s South African letters so badly that I had to cast them.