June 14th, Monday
Our little world is all agog at the coming of the Governor and Lady Grigg (hence our dressmaking). We had a line from Potts asking if we will act as part host and hostess on Wednesday at Elgon Club at lunch. He says he can arrange a car but I do hope Pink gets back (from taking Ell south).

June 15th
Wrote to Capt L this morning saying that as P hadn’t returned we must give up going and to make our apologies but he replied saying he would take us all so we hastily donned all our fineries and set forth and on the way met Pink! All the world and his wife assembled at the “railway station” and at 12.15 His Ex the Governor and Lady Grigg arrived in the first train to enter Kitale. A guard of honour and the Band of the KAR awaited their arrival and as the train steamed in a salute of 7 “guns” (really detonators) were “fired”. It sounded rather like tin cans and at first we couldn’t make out what it was meant to be!
On alighting he inspected the guard and God Save was played. My neighbour in the crowd, a harmless but eccentric poseur, failing to remove his hat I did it for him!! but he took it quite well. We then all drove off to the Banda where speeches and petitions were made and ably replied to by His Ex. He is a fine upstanding man and she a pretty woman with lovely eyes that were captivating the settlers. Lunch then took place at the Club after which we were all officially introduced to them at a Garden Party at the Adams. 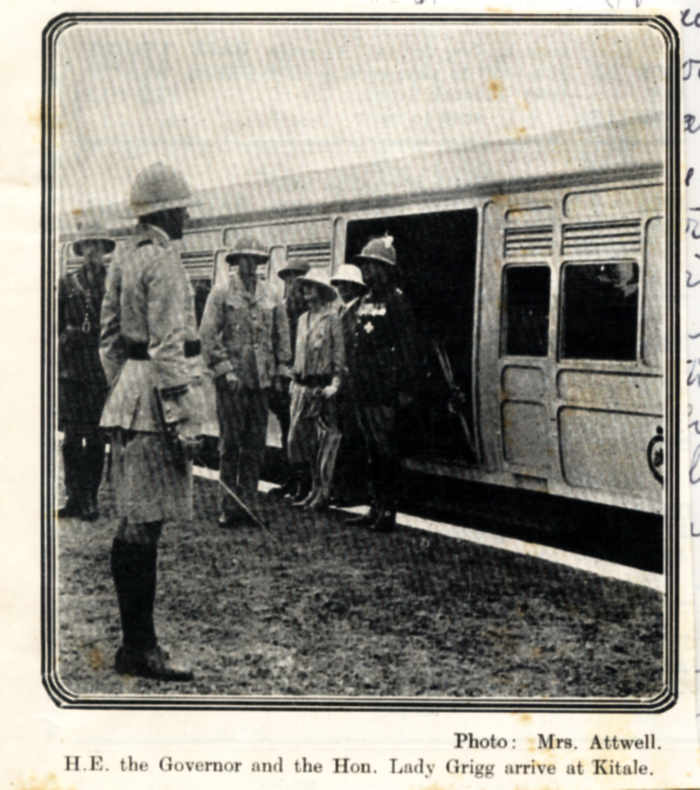 June 16th
Today our guests were on tour inspecting farms and entertained at lunch at Elgon Club. H and I were asked to do joint hosts with the Kirks, and Mrs Potts arranged all. The table looked charming, a large silver bowl with roses, a table cloth of lace, glass, sliver and cutlery of the finest. How they would have smiled could they have known the shifts that went to make up this display – all contributed to it, even the food was divided and the table cloth in reality a bedspread! The soup arrived on a methylated stove and at the last minute it was found that the plates for same had been forgotten and a car was speedily dispatched. Lunch over, they inspected the church and continued to further farms. We then went home and at an early hour dressed in our finest, set forth again as H and I had been bidden to dine with the Griggs at 7.30. PInk dropped us at the DCs house where 12 assembled. His Ex took me in and H Lady Grigg. I insert here the menu. We then all drove off to the dance at the Club and found a large gathering, well over 200 present. His Ex did me the honour to dance with me but they didn’t stay long as she apparently is delicate and was tired. We of course stayed on till the last was removed and didn’t get back till 4.30. Oh it was cold as our car has neither hood or windscreen!

June 17th
Once again we don shamba attire and return to the even tenor of our way. We are thinking of starting a proper duka here. Pink went to interview the wholesale people in Nairobi and we are going to buy a rat and thief proof building. I think it will pay as we sell everything at a profit.