These letters with Strike news arrived in June in Kenya, but as they refer to May they are added here: transcribed below, they are from Wynne’s mother and her old governess. 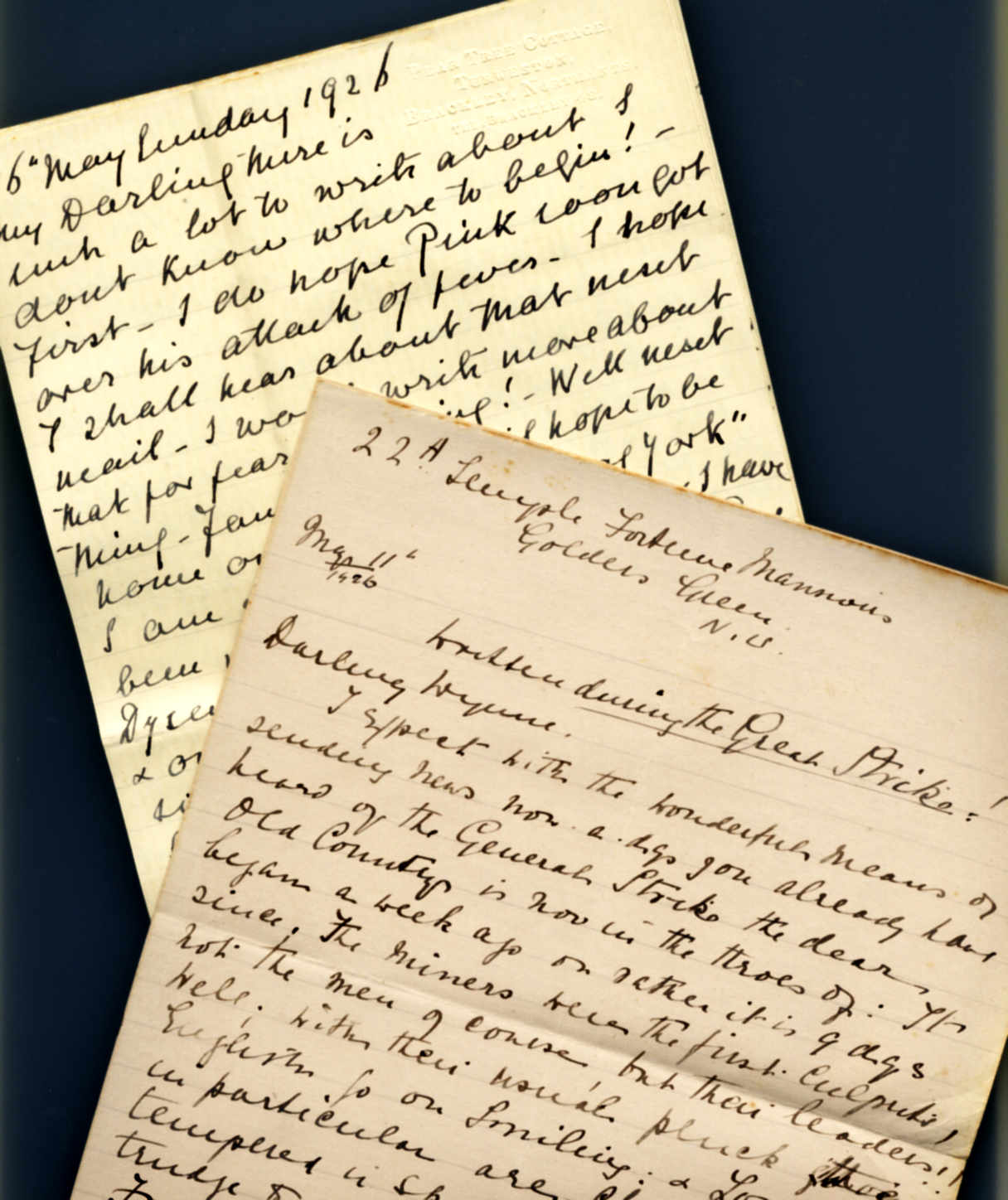 Letter from B.Scratchley, Wynne’s old governess.
May 11th, 1926
Written during the Great Strike!
Darling Wynne
I expect with the wonderful means of sending news now a days you already have heard of the General Strike the dear Old Country is now in the throes of. It began a week ago or rather it is 9 days since . The miners were the first culprits, not the men of course but their leaders. Well, with their usual pluck the English go on smiling and Londoners in particular are cheery and good tempered in spite of having to trudge to work miles in the morning. For 2 days we had no trams or buses and the tube closed, then the buses and trams were run by young students and undergraduates. The first morning I saw a tram coming I rushed to Miss R and said “the strike must be over, the trams are running”, then I looked again and I saw an elegant foot in a brown shoe stuck out by a conductor. I thought, surely that is not the usual kind of get up. Then others came along and we heard that it was voluntary…
One day I went and the tram was crowded. He had to stop, put on the brake so hard we all fell down like ninepins, at which he turned round with a broad grin, highly amused. The conductor then appeared and said in the most aristocratic tones “will some of you gents mind getting off as I am not allowed to take so many” and they got off without a murmur.
No newspapers for 2 or 3 days, now we have a small paper…the police have been splendid as they always are, and they must have gone through some rough times as there has been rioting in the parts like near the Docks, Whitechapel etc but mercifully not anything very serious though of course the public dont really know…
Our old Char came and described how she had seen a man throw a lemon. She said “you know mum, when a lemon is old it gets so hard and dry and he throws it straight at the young gentleman driving the bus and it goes bang in his eye, the policemen sitting by him seized the wheel and went on and then the rioters threw old tomatoes up at the passengers”. Hyde Park and Regents Park have been closed to the public and used as during the War for food supplies and milk. I believe it was wonderful how everything was arranged.
14th – The Strike thank goodness ended yesterday but of course it will be some time before things are settled. I’ve heard the Prime Minister’s speech on the wireless, it was so good. We have had bulletins on the wireless three times a day all through the Strike. We have a loud speaker which I think is nicer than the ear phones. I wish Mis R (BS was acting as companion to this lady) would have a telephone but she wont. One does feel proud how the English rose once again to their country’s call and it is on these occasions my dear we do feel there is no country like old England.

Letter from Wynne’s mother
May 16th, 1926
…Well now, at last about the Strike. It was an experience, and the most wonderful thing was how volunteers came forward at once and in great numbers for everything – railway, post office, porters, dockyard workers, cars by the hundred with their own drivers. Everyone just put their hand to anything and except for some rows big and little by hooligans who all dispersed quick enough when the police or special constables went for them there was no trouble. A good many were run in and fined, never more than about a dozen at a time who had thrown bricks and bottles. Many railway and bus windows were smashed and in some cases things laid across the lines but were always discovered before any harm came of it. We were all relieved when the Strike was over but really the next stage made me more afraid. Was there going to be a revolution? But no, Mr Baldwin was firm and conciliatory, the Labour members wonderfully sensible, no one really wanted a revolution. There were many meetings between the parties. I do think the Churches did their bit too. Everyone felt there must be give and take and friendly feeling between the Classes and so things are very nearly all right.
Every hour men are coming back to work in all trades. They demanded that the men who had been locked up should be released but that was not allowed so they are in the lock up for from 1 to 3 months – time to cool their hot heads!! Also people who went about spreading false reports – Willey came in looking very glum and said “we’ll have a revolution, the postman has just come in and says the Welsh Guards have mutinied and will go with the Strikers”. I was quite angry and said I dont believe it and right or wrong the postman has no right to repeat such reports. The report was contradicted in the evening on the wireless and the starter of the report run in and heavily fined. The Welsh Guards were on duty in Hyde Park! All the Parks were closed and full of stores. Do you know I think it all may lead to a better feeling between the classes – the Miners had a little bit of right on their side too, you know. You can fancy how everyone flew to their wireless. We got the news four times a day officially. Of course one always said to oneself, “it may be worse, they would not alarm us” but I believe we were always told the truth.