January 14th – 21st (Friday to Friday)
I must write a week’s resumé of our doings because I was not able to take this up the mountain. Met Hunt and Bentley and unloaded our poor car somewhat, I transferring myself to Bentley’s and then set forth. 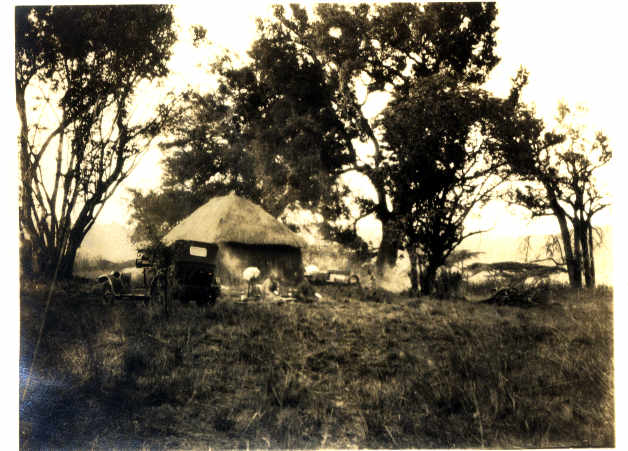 The ground rose gradually, getting steeper and steeper, until at last our front spring which was half broken already gave way and the usual log had to be resorted to. At about 5.30 we arrived at the end of our journey and found there on the edge of the forest a large grass house so there was no need for tents. Quickly unpacking beds, food etc we had a large camp fire lit and B having brought up his gramophone, after dinner we all sat round and by the light of immense flames and the tropical moon we listened to all sorts of lovely music until it was time to turn in. The next day, Saturday, we went in the morning round the near forest and chose the site of Hunt’s future home and examined his land. It looks lovely and from his house he sees on one side the Bluff and a nearer ridge and on the other the whole of the plain and mountains of Turkana. After lunch we lazed and then Crtich arrived having almost upset his car en route over some awful short cut he took.
The moon each night becomes more and more full and as the nights are absolutely still its really wonderful lying by the fire listening in the stillness to Puccini, Mark Hambourg, Tchaikowski, to say nothing of ballad and the foxtrot. There are just the six of us and all absolutely congenial, and all in love with the simplicity and absolute naturalness of it all.
Sunday was the occasion of an all day expedition to a distant cave and though with great determination we reached our goal we nearly died in the attempt for the going was stiff both in the climb and through the high elephant grass. From a Wandorobo we had heard an interesting story with regard to this cave. It appears that as a child he lived there with his tribe and the Nandis in a raid wiped out the lot, killing many and making prisoners of the rest, he being one. For 15 years he was with them. We crawled up the last lap and found a series of huge caves, all of which showed signs of present occupation in the way of recent fires, bird traps, a new bee hive, a grain store and little mud houses built into the crevices of the rocks, but not a sign of a creature did we see though they were most certainly watching us from somewhere. The interior was full of dust and bones and upon high ledges we found caches of treasures such as cow skins and bottles, and other such valuables.
Outside we found other evidences of long ago, a flat ledge upon which constant fires had been lit and around it the “council” seats which had been polished highly by the countless hundreds which had sat there in war conclave, such things mute evidence of the free past. Now, well the British Govt has stepped in and though it must be more convenient not to have your wife carried off yearly etc…yet freedom as they value it is gone.
We got a magnificent view from here across the valleys and I can imagine how it must have been a splendid lookout.
Monday, early saw Crtich away back to vile work, and we set forth up a logging track which led us right into the heart of the forest where they were felling cedar and there we had lunch. Lying on my back my thoughts went back to the year 1 when as a girl I used to take myself off to our woods at home. The trees here are magnificent. towering up through the dim light into the sunlight above, the undergrowth a dense mass and giant lianas twisted around everything. 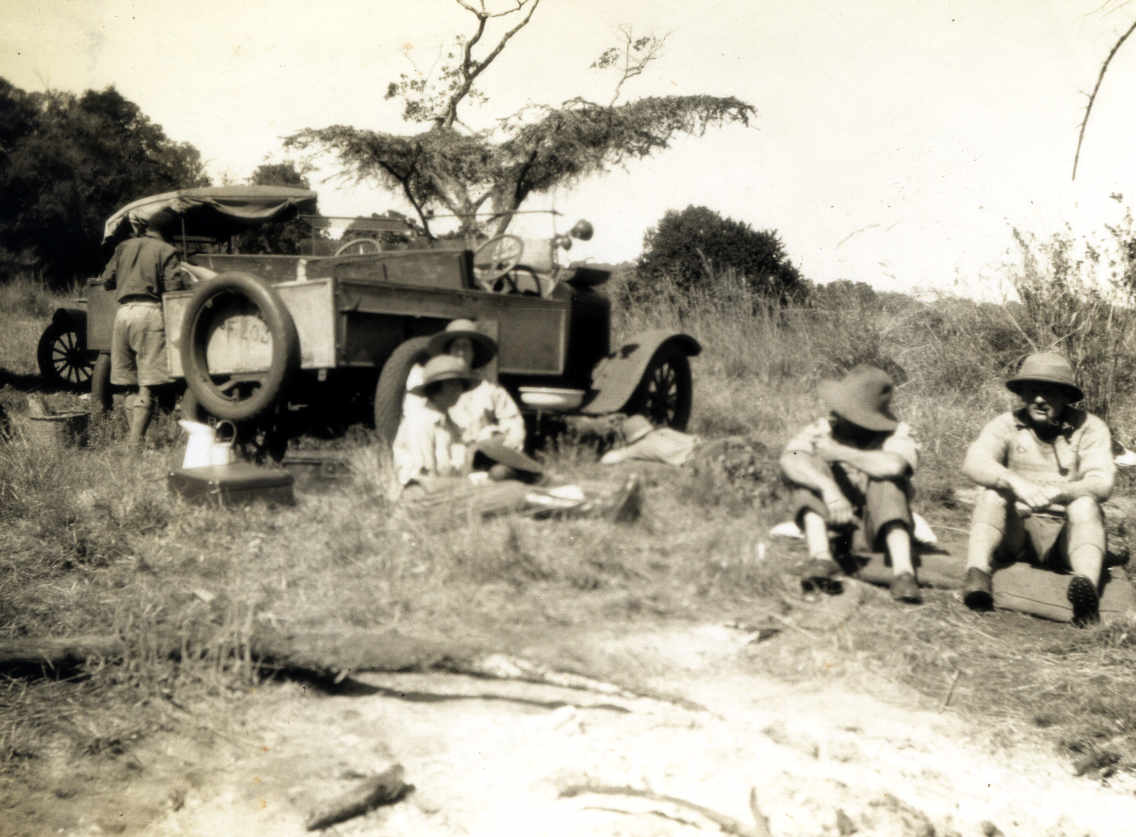 Tuesday saw another defaulter, for Bentley had to return. We idled all day, and oh, what a treat it is for a change!
Wednesday we sent a boy over to H for more eggs, tomatoes etc and when he returned on Thursday he brought bad news, for the wheat crop of which we hoped so much is poor and light weight and if we get 200 bags we shall be lucky. I am so sorry for the son after all his hard work. Well one must just take the bad with the good and practice stoicism. Bentley returned that evening.
Friday we broke camp and had barely gone 100 yards when Hunt sprung a puncture and I hour was spent mending it. A short way further and our spring log slipped its moorings and another hour fled away, and then we mounted a rock and broke the rope tying on the log. In the end at 8.30 we reached home and I honestly was more than thankful. How or why we got home without mishap is simply due to Providence, especially as B had no lights except a very wandering spot lamp and though we stayed in a bunch we couldn’t have been much use to him.