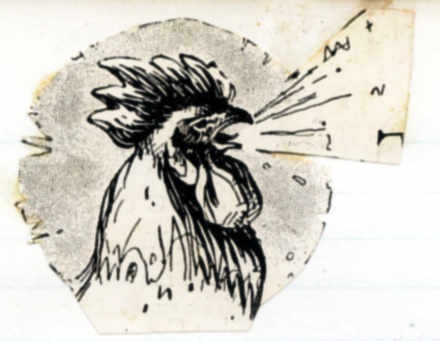 March 1st, Tuesday.
We are having vile bad luck with our n’gombies (oxen) at present and they are dying like flies. It is one of the serious losses of this country over which one has no control. Brought the vet over here today and he pronounced it simply poor condition so all ploughing must cease and they are all to go to Harry Taylor’s farm to graze.

March 4th
We have Shaw staying with us for the week. He is quite out of the ordinary line of settler, a man of an entirely different world and I sometimes wonder how he can bear this very unintelligent and totally rural life.

March 5th
We are now busy building a garden house and I’m frightfully bucked over the prospect of having a place to sit in the garden. The boys huts are also being built, the roof of my store renovated and H’s workshop is being done too. Still no rain. I can hardly get enough flowers for the house and all the lawns are yellow! Shaw, Pink, Babs and I went up to the boundary post this evening. A most magnificent view, with Elgon on one side and the Cheranganis on the other. A wonderfully still evening.

March 6th, Sunday
To church today, we all went except Pink and Shaw, the latter is an R.C. A large congregation in the little church. Bentley came up yesterday and we spent a most interesting afternoon simply talking, the subject of the conversation was the country and its pros and cons, Shaw being a pessimist and Bentley the reverse.

March 9th
Into K for a Women’s Meeting. 45 females, and Mrs Turner, President of the League, came up from Nairobi to speak. This League appears to be becoming quite a power in the land and now numbers 600 members. It’s aims are the betterment of all women, both while and black.

March 10th
Home again Deo Grazia. Found all well and my garden house complete so that I sat there sewing after tea and more than enjoyed a quiet evening. 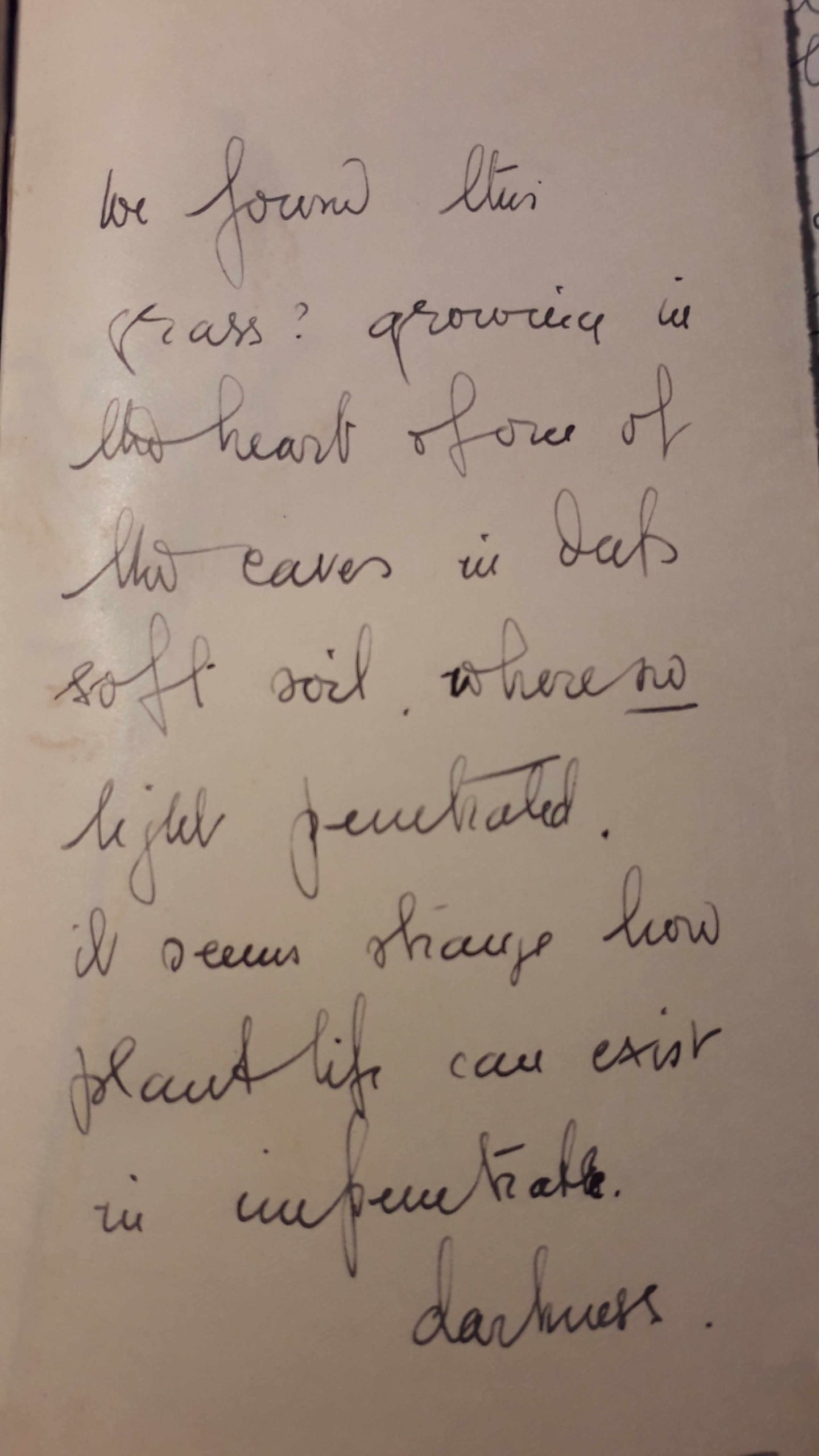 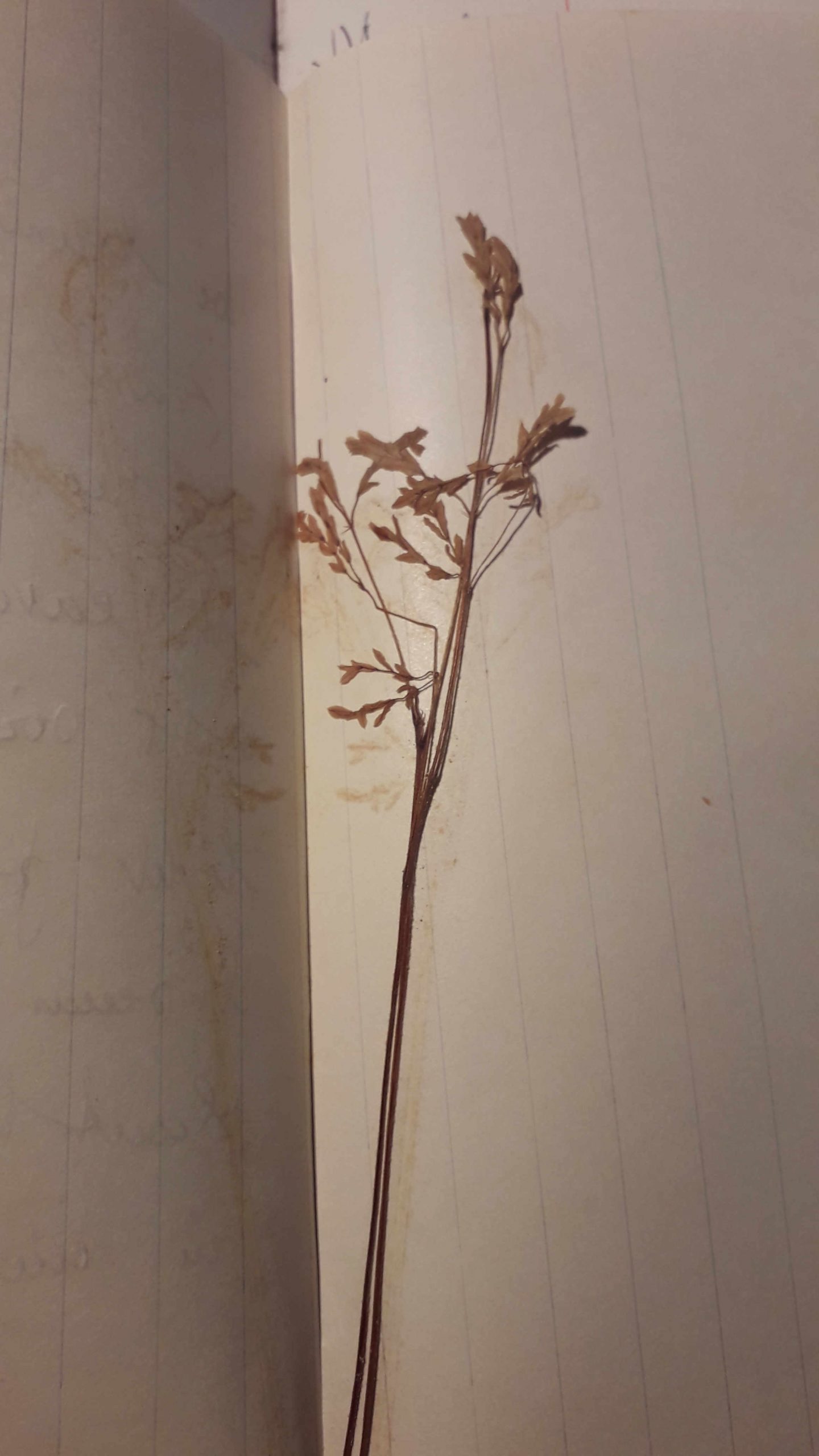 March 12th, Saturday
Attended a huge picnic given by Dorothy in the caves at the bottom of the shamba. An all day affair with a vast concourse of people all seated around with the spread in the middle. It looked like a film set, the huge cave screened by creepers and the underground river flowing from beneath the rock on the outside. After lunch we went exploring further caves, finally finding the famous Barberton Cave wherein they once got lost and of which it is told that not so long ago a party of young Masai went in for some religious shauri and never appeared again. I can well believe it. It is reported to run for 4 miles with innumerable turnings, pitfalls etc. In another cave we found this grass (?) growing. Strange that any vegetable life can exist in such an environment. Our lamp awoke thousands and thousands of huge bats which cam streaming out of tunnels like long wreaths of filmy black gauze, most horribly unpleasant. Eventually we found ourselves back at the original entrance.