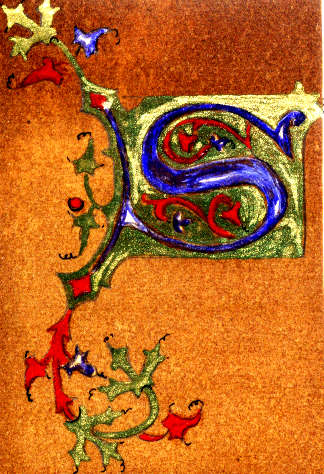 September 1st, Sunday
We went to Kirk 5 strong leaving of course the 3 menfolk at home. Men have no sense of duty! Today is Ell’s last day and we are sad but he hopes to come again next April so its not like the old days of parting.

Sept 2nd
Major Hill came to lunch full of Malindi but not in love with the travel by road as they evidently pushed it to extremes and one day did 300 miles, too much altogether.

Sept 6th
I have not written in these last four days as they were simply spent in busy preparation for our departure for Malindi, and also for this the first Trans Nzoia Horticultural show. Very early PInk, Babs and I set off with a bath full of flowers and water – dire mistake! Every time the car plunged the flowers did ditto and by the time we got as far as von Mallitz they were almost reduced to pulp so out we bundled and emptied the bath and replaced the exhibits! As we neared the township to add to my depression we had a puncture necessitating a crawl in and consequent lateness. There then ensued a fearful scramble as the judge was supposed to arrive at 10. Galt, the head gardener at Govt House in Nairobi judged and gave a very useful speech and then the prizes were given, mine amounting to 65/-! and to my really great surprise I also won the Challenge cup. I cannot help confessing it was due to the general poorness of the whole thing, it’s too late and everyone’s blooms are over.

Sept 7th
I’ve seldom spent a more strenuous day. Early before breakfast the boys arrived to move furniture as we feel its safest to have as much in the new house before we leave as possible. This little home of four and a half years is looking empty and derelict. In addition our packing has had to be seen to and the contents of the chop boxes gathered and packed. Our party is now complete, 8 of us in 3 cars. It is a great adventure and we are excited and thrilled at the prospect of our 700 mile journey into the, for us, unknown.

Sept 8th, Sunday
Long before sun up the household was stirring, the last bits and bobs gathered together, the beddings stuffed into valises and the cars packed. Then a hasty breakfast, a fond farewell to our beloved animals and incidentally our boys who all turned out to say jambo and off we went. Owing to rain our roads are truly frantic and at the foot of Leonard’s hill we, the first car, plunged badly and stuck. The whole party turned out and with heaving and pushing got her free. Coming next to van Mallitz drift we found it in an appalling condition. We and Major Thorp managed to reach the other side but Gray bringing up the rear slipped and fell right into an immense cavern. Spade and jembe were put to work and we dug her out and eventually proceeded on our way!
As we continued the road became drier and at 64 we paused to fill up and drink a spot of beer and so on through Nakuru eventually reaching Gilgil just at dark where at a very clean and comfortable little hotel we slept. 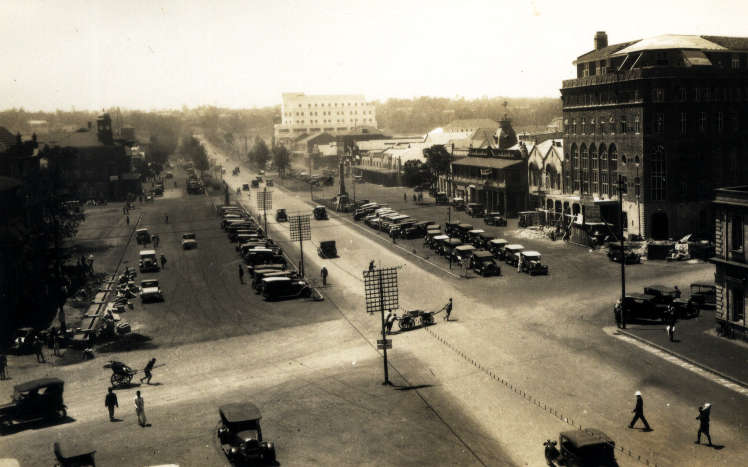 Sept 9th
On at an early hour again, stopping at the river just before mounting the Escarpment to fill up with water. I was glad when this really rather frantic mountain was surmounted. It is a climb and of course halfway up our carburettor would play the fool so that she grunted and heaved and moaned making me feel each minute that we should slide over backwards! Making Nairobi at lunchtime we hastily washed and fed and then went off shopping. Though it was only six months since I was down, Noots hadn’t been here for about 3 years and Babs not since we came out. To our great joy Ell turned up during the evening and we had a great beano, dining and dancing and then on to the cinema where we saw some splendid sob stuff entitled “Is Love Everything”. 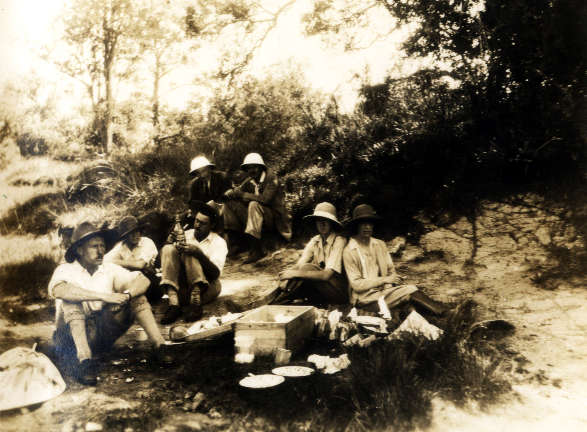 September 10th, Tuesday
Loading the cars we left at about 10. Our road, the beginning of real pioneer travelling, lay for the first part through scruffy forest and various farms cut out of the hillside. At 1 we halted for food, the heat was boiling and the dust terrible, the two cars behind us got smothered. Continuing we eventually reached Sultan Hamid and there commenced a long run over the most terrible area, I think it must have been the Desert for everywhere around as far as the eye could see stretched a limitless waste of bare level red earth (almost certainly Wynne is referring to the Nyiri Desert). The track was deep in soft red dust and everywhere the mirage created fanciful landscapes conjuring up water and trees etc and one could just imagine what it would have felt like in the old days being lost in such a place. Our halt this night was Makindu, a place on the line where one puts up and feeds, all the men at one end and we at the other of the station house. On arrival we called for and got iced beer!! After a very good dinner we got to bed where despite the perpetual noise of trains etc we slept like the dead.