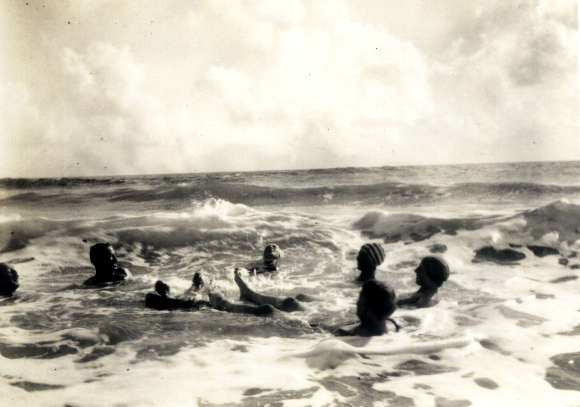 Sept 18th
All day the sun shone, this is much more like it. We’ve bathed three times, the last being by the light of the full moon, a really lovely experience. The family is suffering from severe sunburn of the legs, the two girls being the worst, and are swollen beyond recognition. It’s awfully stupid of us not realizing that this would happen. We have resorted to vaseline and stockings. Personally I am not afflicted. (See photo at the bottom of this page – resting in the mango grove with thick stockings on!)

Sept 19th
At breakfast this morning we were upset by a wire for Dorothy (Blake, a guest with them) saying “Mrs Kuhn accidentally killed can you come help May”. We know no details but it seems a big favour to ask and to drag her back 700 miles.
Having been invited to tea at the Wake Bowell’s (the schoolmaster) I set forth and walked there. They had asked Said Sudi to meet us, he is the son of the big man here and was educated at Oxford. Pink and Noots came up later. 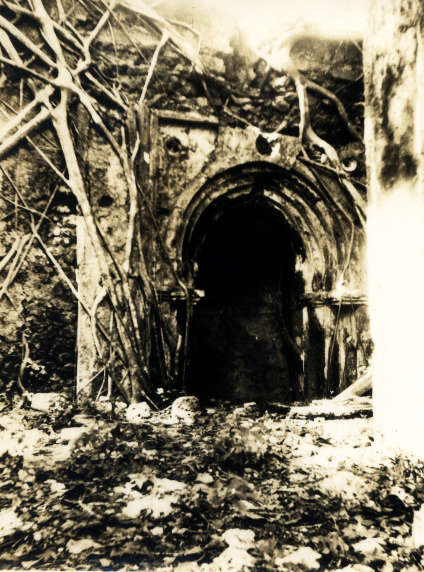 Sept 20th, Friday
How can I describe an expedition of extraordinary interest in which we have been today. There lies 11 miles out a ruined city called Gedi. Two years ago when Pink was down with Wreford they visited the spot and also the ruins at Kilifi. Their origin is a mystery and nothing much is known about them. Recently the British Association visited and Prof Fleure in the E.A.Standard wrote a brief account. His opinion is that they are of Persian Islamic origin but he had not investigated thoroughly. The city walls are supposed to be some 5 or 6 miles in circumference and the population judging from the mass of buildings and immense wells must have been numerous. The forest has claimed it and immense trees have cast a stranglehold – the place is full of spirits of the past and one wonders what the age old history of it all was. We came across apparent temples, a huge tomb, a swimming bath and many mysterious buildings the use of which we could not even guess at. One of the temples was decorated with blue glaze faience and after searching I picked up a lot in the earth beneath, also a fragment of glass. On one wall scratched into the plaster a crude picture of a dhow and a variety of other hieroglyphs and one the tomb a small portion of Persian could be seen. I was struck by the immensity of the wells and down their sides one can still trace the marks of the ropes made in the plaster when water was drawn up but even in the deepest no water could be seen.

Sept 22nd
In the Bay not far from the shore on the reef there lies a wreck and today we made an expedition out there. For seven years the thing has lain there. It belonged to an Indian who insured it for £10,000 being worth about 2000 and one morning he commissioned his Capt to run her ashore. Mr Wake Bowell was on board and was shot out of his bunk on to the deck. He found the Capt and Chief Engineer quite unperturbed so he got a dhow to take him ashore and they got their insurance. Later the same man tried the same game outside Mombasa but this time the Insurance Co are fighting it.

Sept 27th, Friday
Mrs Duncan has brought down details of the mysterious wire to Dorothy, a frightful story. It appears that they were losing ducks and geese so Jack had up all the boys and told them that if he heard anymore noise he should go out and shoot. Accordingly the next night hearing a clatter out he went and seeing a figure he shot, nothing happening he shot again and hearing a moan went up to find the children’s nurse Mrs Kuhn who died two hours afterwards! What a ghastly situation and what a time poor Dorothy must be having.
We all went to the forest and spent the day under the mango grove.

Sept 28th, Sat
The mail included one from Mrs Jack re house things with an added note about the tragedy and one from Upton giving the whole story. There has been a police enquiry and it is said no blame is attached to anyone. I only hope the inquest will prove the same. I also heard from Mabel and Kitty who arrive about the 17th so we shall be at sixes and sevens on our return. 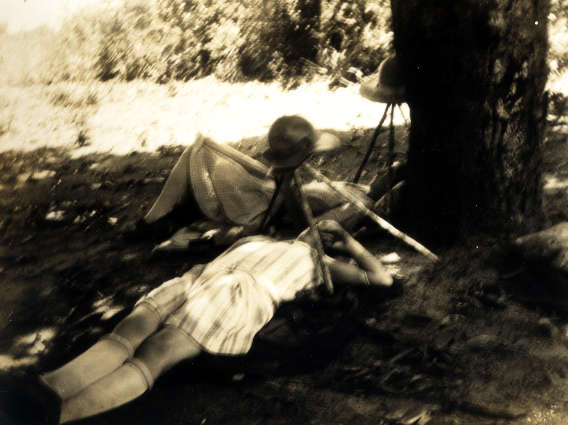