A 700 mile car journey across Kenya, from the farm on the slopes of Mount Elgon, down to the coast at Malindi. 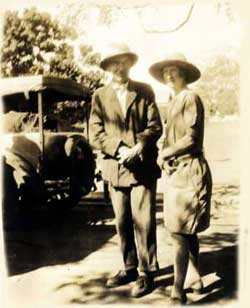 September 7th, Saturday
I’ve seldom spent a more strenuous day. Our packing has had to be seen to and the contents of the chop boxes gathered and packed. Gray, who stayed in Kitale the night returned to lunch and at tea time Major Thorp rolled up so our party is now complete. 8 or us and 3 cars. It is a great adventure and we are most awfully excited and thrilled at the prospect of our 700 mile journey into the, for us, unknown.

Sept 8th
Long before sun up the household was stirring, the last bits and bobs tapered together, the bedding stuffed into valises, the cars packed then a hasty breakfast, a fond farewell and off we went. Owing to much recent rain our roads are truly frantic and at the foot of Leonard’s hill we, the first car, plunged badly and stuck! However the whole party turned out and with heaving and pushing got her free. Coming next to the von Mallitz drift, we found it in an appalling condition. We and Major T managed to reach the other side but Gray side slipped and fell right into an immense cavern of mud. Spade and jembe were put to work and we dug her out eventually and proceeded on our way! A good beginning! but as we continued the roads became drier and at 64 we paused to fill up and to drink a spot of beer and so on through Nakuru, eventually reaching Gilgil at dark and where at a very clean and comfortable little hotel we slept. The road was none too bad. We climbed to Molo by the Londiani way and before finally descending we had lunch by the way side. Such wonderful country, huge, wild and remote. The descent was somewhat grizzly as our brakes were none too good and we had chiefly to rely on second gear. 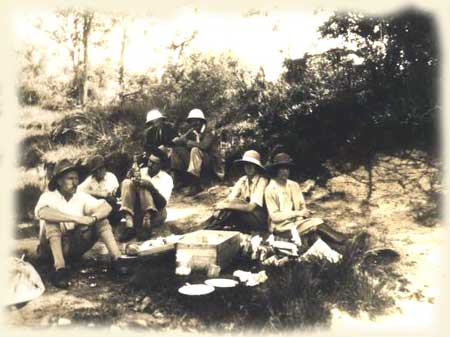 Sept 9th
On at an early hour again, stopping at the river just before mounting the Escarpment to fill up with water. I was glad when this really rather frantic mountain was surmounted, it is a climb and of course halfway up our carburetta (sic) would play the fool so that she grunted and heaved and moaned, making me feel each minute we should slide over backwards! Making Nairobi at lunchtime we hastily washed, fed and then went off shopping. It seemed quite unusual to be in civilisation again though it was only six months since I was down but Noots hadn’t been here for about three years and Babs not since we came out. To our great joy Ell turned up and we had a great beano, dining and dancing and then on to the cinema where we saw some splendid sob stuff entitled “Is Love Everything”. Returning to the hotel we indulged in more refreshments and danced again. I hadn’t danced with Ell for I should think 25 years and it seemed strange to be gavorting round the room in the dance of today instead of the waltz. 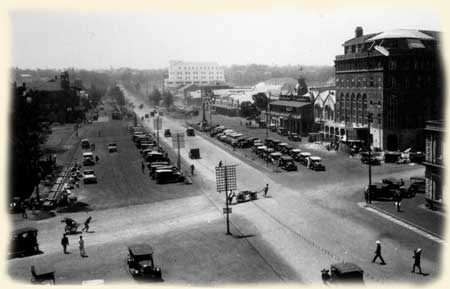 Nairobi in 1929, looking down the main street with Torrs hotel still under construction on the right…

Sept 10th
Loading the cars we left at about 10. Our road, the beginning of real pioneer travelling, lay for the first part through scrubby forest and various farms. At 1 we halted for food, the heat was boiling and the dust terrible . We eventually reached Sutlan Hamid and then commenced a long run over the most terrible area, I think it must have been the Tsavo Desert for everywhere around us as far as the eye could see stretched a limitless waste of bare level red earth. The track was deep in soft red dust and rough beyond description. Maj Thorp who essayed to strike out got a puncture at once and this caused a short delay when we waited for him to come up. Everywhere the mirage created fanciful landscapes conjuring up water, trees etc and one could just imagine what it would have felt like in the old days being lost in such a place. Our halt this night was Makindu, a place on the line where one puts up and feeds, all the men at one end and we at the other, of the station house. After a very good dinner we got to bed where despite perpetual noise of trains we slept like the dead. 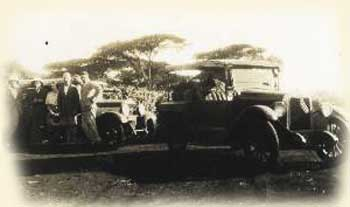