On December 9th the family set off up country, catching the train from the coast up to the capital, Nairobi…

Dec 10th
We awoke this morning to find ourselves in the Animal Reserves and the most wonderful interest of the journey was added to by seeing herds of gazelle, wildebeest, zebra, ostrich and baboon swarming over the limitless plains quite unconcerned by our train. At 7.0 we stopped for a most villainous cup of grey tea filled with the milkmaid’s chemise and then again at 9.0 for a very good breakfast. At about 2.0 we reached Nairobi. After long delay our luggage came to the New Stanley Hotel where we are most comfortable, they charge 18/- per head per day and 16/- if you stay a week, inclusive, all modern arrangements and filled with settlers. N(airobi) is the capital of Kenya, a large modern town, taxis, motors, moto cycles and rickshaws.

The next days were spent exploring and making purchases. “How wonderful all this is to me” Wynne writes after a visit to the Arboretum…and then about the rough roads when they went to stay with the Trenches at Nyeri: “I suppose in time I’ll get used to them but I must confess at present they terrify me.” Finally, after ten days, they set off for their final destination, to stay with Major Tyack while their own property was made ready…

Dec 20th, Saturday
We left Nairobi today, the car ladened up like a gypsy van! We have two carriers one on each side in which we put six suitcases and filling up the body with innumerable smaller packages we started forth. An arid country we now struck, endless dead and dry plains with occasional belts of forest where grew many lovely flowers. We mounted higher and higher at one part reaching an altitude of 9000 ft. from where we had a splendid view and I was thankful when we had safely negotiated the “Escarpment”, a fearful narrow hairpin bendish track over which a few days since a man and his car had gone! We reached a place called Nyvasha (Naivasha) at 3.0, and finding an Hotel we stopped and had an excellent lunch, arriving at Nakuru at about 6.30. 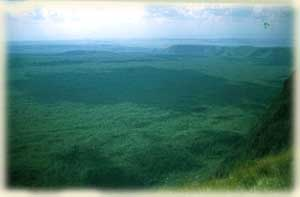 We are staying at about the last civilized Hotel that we shall see for some time. In the morning we took the car out to see what is claimed to be the biggest crater in the world! (Menengai Crater). Our afternoon was spent paddling in the huge soda and salt lake close by, its surface was covered with thousands of flamingoes and its shores with the pud mark of Hippo, both of which thrilled me much. It seems so curious to be seeing all sorts of things like this out of the zoo!

Dec 22nd
On again, and though we started at 9.30 we did not get in till after dark! Such a dried up waterless area, miles and miles of it, and such roads again. We had to stop en route at Timboroa and Eldoret to enquire about our heavy baggage and at the latter place added to our load 3 valises two of which were slung over the bonnet and one was put inside so that our feet had to stick out over the top! We reached Hoeys Bridge after dark so stopped to enquire the way. Capt. Wilkinson who keeps the store there most kindly came out with his car and piloted us which was lucky as we most certainly would never have found the way. The track from there on to Major Tyack’s place wound its way between the trees and lost itself amongst the grass continually, one awful hill descending to a bridge full of washouts etc, simply turned my hair green! We just put up our camp beds, had dinner and turned in, too tired to think of anything else.

Dec 23rd.
And now for a description of our quarters. It contains three large rooms and has mud walls and floors and a grass roof. It is unceiled (no ceilings) and unglazed and is in this respect just like our hosts’. We have our camp beds (very horny to the hips) and a few table, chairs and some elegant pieces of furniture made from packing cases. As one looks above ones head into vast festoons of spider webs one wonders how many of the occupants will drop upon ones head but I must say the house seems very doo-doo-less (dudu was the Swahili word for insect – clearly the spiders were doing a good job). We were here for a fortnight during which time the Crawfords came over for Xmas and stayed 3 days. We saw a good deal of the Wilkinsons, went to tea with the Hoeys who are nice people and have a charming garden, the children went to a dance at the Roberts and over to tennis with Mr Bentley.

Dec 25th
Christmas Day passed like any other day, a blazing sun and summer clothes made it hard to realize. We were 9 at dinner and had brought out a plum pudding, dessert and drinks whilst Maj T provided the turkey. For this there were special preparations, a place was cleared and H deputed to carve and knives sharpened when to our consternation a sort of mashed up hash arrived looking as though the cook had sat upon it! However it tasted good and we finished up with toasts and crackers. Personally I was rather glad when it was all over as the 25th is such a time of memories.