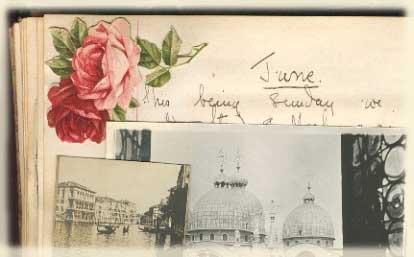 A second Italian Holiday
May 28th – June 15th
You can read a chronological account of Wynne’s journey in the 1913 diary entries. Here are some additional descriptions of her journey. 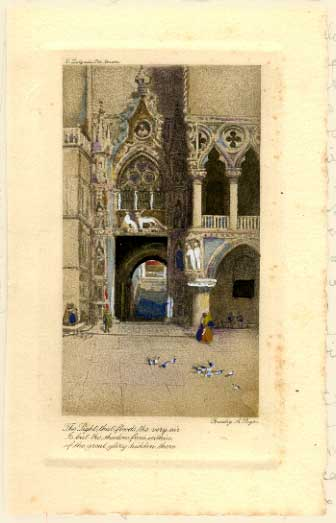 May 31st, Venice
The whole of this morning was devoted to the Doge’s Palace, and we duly raved over its exterior, interior salons, pictures, museum and dungeons. The museum though is dull but the the dungeons thrilling and of course we went over the Bridge of Sighs. The spacious rooms with their gorgeous pictures filled us with wonder, most especially Tintoretto’s Paradiso with its 500 figures which fills the entire space of the end wall in the Sala del Maggio Consiglio. It is subdued in colouring and soft and it is wonderful to think that he was 70 when he painted it. The room in which the Council of Ten sat is beautiful and has a semicircle of carved seats and a door which communicates with the dungeons. The dungeons are fearful gloomy holes with no light at all and many under water level though dry now, and at the end of a passage we saw the place where they were shriven, executed and cast out by a door to be taken away and dropped into the lagoon whilst at one corner were two round holes which were made for the blood to flow out into the canal – it is a most wonderful building and I took several photos. We lunched at a little cafe in the Merceria and afterwards went by steamer over to the Lido, a sandy strip covered now in houses and hotels and at the Excelsior where we had tea it was so fine and grand that one might have been at the Ritz! 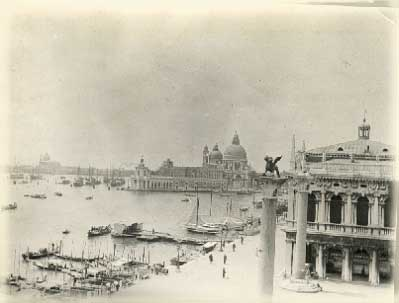 June 6th
A description of the Cathedral at Perugia
The Cathedral is a strange bulding – outside rough brick with many scars and the lovely marble with which it once was faced has all been torn down, inside is a lovely chapel belonging to the Guild of Merchants (the Chapel of S. Bernardino) who bought the rights in 1515, and the altar picture is beautiful by Baroccio. The other big chapel is that of the Virgin’s Ring and behind and above the altar where a silver cloud is fixed there lies in many safes the Virgin’s Ring, only exposed 5 times a year to the public. Against the 3rd pillar on the right is the miraculous picture of Our Lady, to my mind a beautiful thing, it is attributed to Giovanni Mannie. Silver hearts and offerings surround it bearing testimony to the comfort it has given many, it is behind glass and is beautifully jewelled – in the left transept is a porphyry urn which contains the bones of the Pope Innocent III, Urbino IV, and Martin IV around which hangs much history. The Canonica (cloisters) has little to show of what must have once been a wonderful building, indeed Bonazzi has called it the Vatican of Perugia but it has been destroyed by fire and rebuilt and all mixed up to such an extent that one can hardly trace the old part. The cloisters are very quaint and quiet 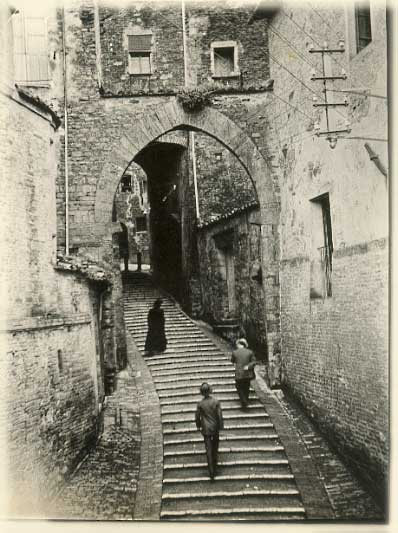 – we explored a good deal among the old streets and oh! I should love to stay here long and really read it all up.
(It is amusing to compare this description to those is modern guide books – Cadogan has no mention of Barocchio and most dismiss the building in a few lines. ) 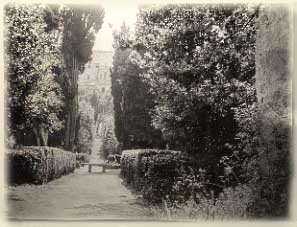 June 10th
A visit to the Gardens of the Villa d’Este
We first went to Tivoli where we saw the Villa d’Este and the truly perfect garden both made by Cardinal d’Este in the 16th century as a summer resort. The villa is chiefly taken over by the town now and only a few rooms with elaborate frescoes are shown but one can wander at will over the exquisite garden the like of which I”ve never seen.. The villa stands up high and the garden falls away below it in terraces, the main thought of that man was to fill it with fountains and waterfalls and cascades so that everywhere is the sound of falling water. 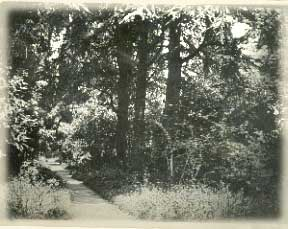 The long cool walks overshadowed by cypress, pomegranate, roses etc are bordered by streams, the air is scented with roses and jasmine and everywhere the butterflies and dragonflies fly around and the little green lizards dart in and out of the maidenhair which grows over all. In every tree the birds sing, most especially the nightingale and he sings of times that are long gone by, when this place was loved and cared for, perhaps he sings at the shrines of the now deserted goddesses who must tire of their perpetual solitude for only the tourist walks here now (like ourselves) and what god or goddess could find company with the creature of the guide book and the camera! 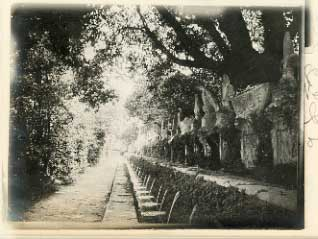