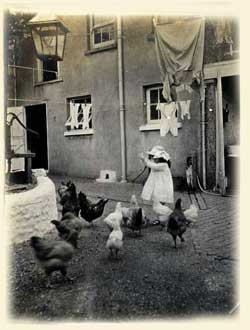 William Gilham’s connection with Wynne began around 1910, when, as a scruffy little urchin, he was brought in to help Baker in the Aldershot garden. Ysobel remembers him fondly, as you can hear, and clearly recalled the scene of him being washed under the stable yard pump by the cook. The picture here is of that yard.

He enlisted in the Artillery as soon as he could after the outbreak of war, but kept in touch with Wynne throughout. As a survivor, he had a good war, and an experience that must have transformed his life, offering him enormous opportunities to experience the world and expand his horizons.

Now follow his story as we have it in the diaries – just click on the dates for the links to his letters and mention of him, and use your computer return to come back to this page, not the close page on each view you will come to. 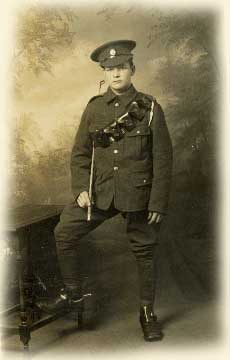 In 1914 we have our our first sight of him in a photograph he has proudly sent to Wynne. She has spelt his name wrong, probably because to her he was always just Willie. There was clearly, however, some affection shown between them, and towards the end of the war Wynne was sorry that William’s leave had been too short to allow for a visit to Somerset.

In 1915 he appears to be somewhere East, probably at the Dardanelles.

In 1916 an entry mentioning a letter implies he could be in Serbia. Of course, because of censorship it was often very difficult for people at home to know where their loved ones were.

In 1918, in May, we finally know he is now in Palestine, and he sends a long letter and some pressed flowers. Its a touching thing to do, and something he must have known would delight Wynne, who was always receiving these sorts of tokens from the front line.

In July an embroidered card arrives, and later an interesting letter as William has finally got some home leave, after 4 years! Life was rather different for a Tommy, often overlooked when the leave rota came up. He is particularly annoyed to discover that his old boss, Baker, is a conscientious objector, something he discovers on a visit to Hale.
In September Wynne has stuck in a caricature and written under it Baker, in a reference to William’s letter. It clearly resonated with her.

For a final, jaunty shot of a confident and handsome young man, check him out in November – the great survivor.

In an entry Wynne made on November 18th 1921 she mentions a nostalgic visit to Farnham and her old haunts, where she learns that William is now married with two children. There is no mention of a meeting, nor of further contact.