A Victorian New Year with Wynne

If you’re having a boring New Year’s Eve, what do you think Wynne was doing over a hundred years ago? It was all good clean fun, but I don’t think either the Fire service or the Health and Safety Executive would have been too happy with Snap Dragon, a fearsome game which involved youngsters thrusting their little hands into flaming brandy to get almonds and raisins, or sometimes the odd small coin, a process that took the polish off the wood floor and the skin off your fingers if you weren’t careful….

December 31st, 1895
In the morning we did nothing special, but in the evening we played pool and danced till about 10.30, and this being New Year’s Eve we of course had Snap Dragon and sat the old year out. At 10.30 it was ready, we assembled in the dining-room, heated and lit the brandy and put the lights out, then set to work to pick the almonds and raisins out – it was such fun especially as we didn’t burn ourselves very much.
When it was all over we decided to go out and listen to the Bells and leave all the doors open, so as to let the New Year in, the night was lovely and warm, we then sang Auld Lang Syne with crossed swinging hands and afterwards returned to the dining-room where we smoked cigarettes and drank the healths of all our friends until one o’clock when we turned in for bed, so we thought.
I must mention here that while the men were having their first smoke we went to their rooms and filled the rooms with practical jokes. We gave them each an apple pie (bed), and holly, sewed Elliot’s pyjamas up in 600 places and hid his shaving brush. So far so good. When we had all retired to bed we thought we would leave our doors open so as to hear how our jokes went on, but unfortunately by some accident they both found out and as soon as E had done so he came tearing up the stairs and I had just got into my nighty when in he burst, caught hold of a corner of our bedclothes, pulled them all off and rushed downstairs with the whole lot.

Who said Victorian young ladies were demure? though I rather think smoking might not have been allowed if the parents had been at home….pool and cigarettes, and not yet sixteen!! 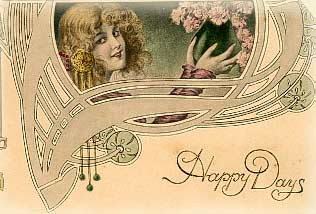