Wynne started writing her diary in the closing years of the long reign of Queen Victoria…here is a flavour of her life as a young Victorian…with its slang, its practical jokes and its occasional surprising leniency!

With time and imagination, things could be done to fill the hours and while away the winter afternoons while Mother and Father were away. Wynne had been left in the care of her elder sister, Eva, and her governess, Miss Scratchley. Yso is a cousin whose mother died when she was young, and as a result she appears to have spent a lot of time at Wynne’s home. 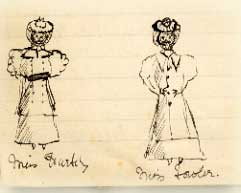 December 11, 1895
This afternoon we had great fun. Yso and I determined to take in Gran and Eva – we dressed ourselves up as missionary ladies and made up a long rigmarole about a young lady being sent out to Japan “to preach the gospel to the heathen”. We then drew up a long list of subscribers and disguised ourselves by blacking our eyebrows, wearing gauze veils and feigning our voices.
We rung the bell and the maid announced us as Miss Fowler and Miss Hartley, names we gave her, we then sailed in, Eva meeting us bowed most politely and offered us chairs. We then began our request and showed the list. After some humming and hawing she gave us five shillings and wrote her name down. I found it once or twice hard to keep from laughing and as for Miss Scratchley (who knew) she was simply yelling all the time, but Eva did not have an inkling of the truth.

…so, apple pie beds (check out the Christmas section!), smoking with the boys, codes in the diary to conceal her boy-friend…and more freedom to roam than perhaps we realise…I wonder if you know what the following words mean? They occur regularly in the early diaries, so here are a few examples of late Victorian schoolgirl lingo: to bant (v); chippy (adv – as in, feeling…); to be bucked (v); to footle (v); downy (n – as in, trot to my…) and to tool(v).

Traffic , silly rules about bicycles on trains and Mothers scared to let you out of the house seem to have been things of the future as this young girl received her first bicycle and set out to explore….

March 19, 1896
“A Red Letter Day”. Bogel (her father) Mater and I went into Blandford and ordered my bicycle! Gracious, I am nearly mad with joy – it’s a Sunbeam with Dunlop tyres and I am to get it sometime before Easter. It’s a dark cherry red tipped with gold and I am going to have a brass plate put on it with my name and address.
It must have been very pleasant bicycling then, and with such an efficient train service quite long expeditions could be arranged. The countryside was a constant source of pleasure to her.  The bicycle proved to be a liberating event for many youngsters, but especially for girls like Wynne who took full advantage of it.  It meant freedom from the home and from the adults in a way unimaginable ten years previously. 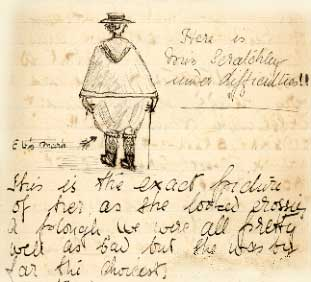 September 22, 1899
We have had a blackberrying craze on and have so far got 48lbs which has been made into jam and jelly. Yesterday morning I went up to Martin’s Lane to get some and sat for some time above the chalk pit – the conies have made such a burrow up there and three were playing about as I arrived – it was a very lovely day, bright hot sunshine yet with that unmistakable feeling of crispness in the air that one knows so well in autumn.

What little formal education Miss Scratchley had been able to impart to her charges ceased after 1897. She seems to have remained with the family to keep an eye on things, and to be dragged out on muddy walks like the one illustrated above! These activities were interspersed with household chores…
Mater and I got up early as she had all the butter to make and I the flowers to do…
Reading and letter writing continued of course, and it was considered appropriate to take singing lessons and join a local reading society. There were also local concerts, sometimes even shows put on by the local tradesmen...it was so weird to see the butcher baker candlestick maker hopping about and arrayed in fairy garments and gorgeous satin cloaks etc...but brushes with culture could be disconcerting…

March 5, 1901
Today although still pelting with rain we sallied forth to Chettle (the nearby big house) to our Shakespeare Reading. All sitting in a ring (we) read solemnly through A Winters Tale. I had the part of Leontes, the longest part of all and a most churlish part to boot, all sorts of blushful and “rather” speeches were allotted to me and once or twice I felt like sinking under the table with horror!

.…as she blushed at the adultery, did she ponder on Leontes last words?
“Good Paulina,
Lead us from hence, where we may leisurely
Each one demand and answer to his part
Perform’d in this wide gap of time since first
We were dissever’d: hastily lead away.” 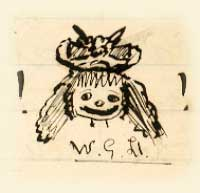 Self portrait of Wynne, aged 16